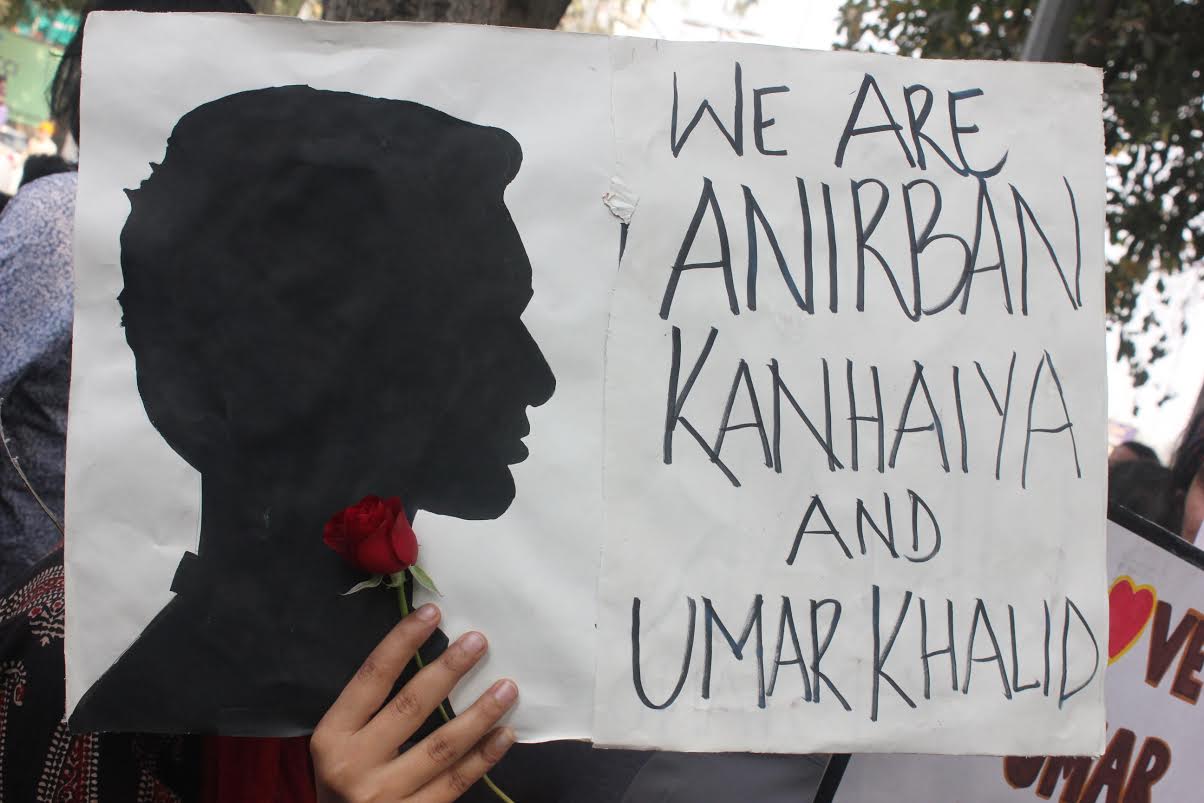 In recent weeks, a number of prominent Indian left-leaning, progressive thinkers and academics have spoken out in favour of the Jawaharlal Nehru University (JNU) student protests. But many have raised concerns that their support comes with a caveat. In this essay, IDREES KANTH examines the dilemmas of this â€˜progressiveâ€™ section of Indians, which again became apparent in the wake of the JNU crisis. Idrees examines the limits of their engagement, especially when it comes to the question of Kashmir, Muslims, and Dalits, arguing that they are unable to reconcile their deeper allegiances and sentiments with their espoused ones.

The America-based “progressive” Indian academic Akeel Bilgrami, while writing a very recent essay, â€œTaking back our universitiesâ€, remarked reasonably enough that, â€œIn a democratic polity committed to the elementary liberties, no matter which form of nationalism â€” good or bad â€” holds sway, any and every person is possessed of the right to ask such questions as: what options do the people of Kashmir have after their suffering over the last three decades, or whether the judicial verdict that sent Afzal Guru to his death was justly made.â€

Yet he also drew from an opinion piece Â by “so wise a person as” Upendra Baxi to emphasise that â€œShouting [of] slogans that are not demonstrably anti-India, and conducting and joining protest marchesâ€¦â€ must be legally protected in our universities.

While there has been a visible divide among Indians on how the government ought to have dealt with the JNU crisis, there is unanimity across sections of people, including the progressives, the liberals, the leftists, that certain actions â€” raising slogans in favour of independence for Kashmir â€” that emanated from the JNU campus are deeply deplorable. And that while free speech must be protected, the Indian ought to be a good nationalist, of the Kanhaiya Kumar variety, who limits his speak to the permissible limits of aazadi within India (from poverty, hunger, and the like).

Many progressive Indians, including radical parties like CPI (Marxist-Leninists), while they have justifiably protested the unlawful detention of Kanhaiya (who they maintain did not utter any “anti-national” slogans) have also stood in support of Umar Khalid â€” one of the students who is still in police custody. However, in the case of Umar, they seek to explain away his â€˜anti-nationalâ€™ sentiments. They claim that some unknowns (read: Kashmiris), and not JNU students, were the ones who raised the inimical slogans of Bharat ki barbadi and Kashmir ki aazadi. As one of these progressive Indians writes:

From the very beginning, it has been amply clear that the people who raised anti-India slogans at the Jawaharlal Nehru University on 9 February were Kashmiris. Yet, the Delhi Police has not even been looking for them, because arresting Kashmiri students in Delhi will finish any remaining chance of saving the BJPâ€™s alliance with the local political party in Jammu and Kashmir. As a result, Kanhaiya Kumar, Umar Khalid and Anirban Bhattacharya are in jail even though they raised no anti-India slogans. If anything, they tried to douse that fire.

While Umarâ€™s being a Muslim makes his case all the more difficult, the “progressive” Indians claim that he is a PhD student, an atheist, a communist, and not a Kashmiri. They quote his father and his sisters to assert that â€œUmar is not religious at all, he is a communist pagal.â€ By this logic, Umar cannot be labeled an anti-national. He is neither a Muslim nor a Kashmiri.

Forgetting the Kashmiri part, for Umar is not one (and also because Kashmiris like myself and others who do not claim to be Indian nationals, cannot thus be anti-nationals), the case again demonstrates the vulnerabilities and the complexities that come with being an “Indian Muslim”. In this context, the historian Gyan Pandey, perceptively remarks, that unlike the “Nationalist Muslim”, there is no equivalent category for the Hindus, or for that matter any of the other religious groupings in India. Of course there is the term: “Hindu nationalist”, but it does not refer simply to nationalists who happen to be Hindus. It is, rather, an indication of their brand of nationalism, a brand in which the “Hindu” moment has considerable weight. It is a nationalism in which Hindu culture, Hindu traditions, and the Hindu community are given pride of place. Aside from the fact that an Indian Muslim is expected to subsume his religious identity to the national, the only feasible option for an Indian Muslim to espouse a place within a certain alternative version of “national” community (read: progressive) is to be a “progressive” Muslim himself/herself, even as this progressive community reinforces the national identity, albeit in a different way. Perhaps the reason the Irfan Habibs, the Mushirul Hasans, the Shabana Azmis etc, are “progressive” and therefore, Indian, to answer Pandeyâ€™s question: Can a Muslim be an Indian?

The unrelenting Indian romance with the nation and nationalism, progressive or otherwise, is as old as the Indian national struggle.

Even in such apparently emancipatory academic projects as the Subaltern Studies, the “national” undertone becomes apparent when we read the latter volumes. While the initial volumes sought to rescue the subaltern from being lost to nation and history, after 1986, the substance and meaning of subalternity shifted, as the framework of study increasingly stressed the clash of unequal cultures under colonialism “and the dominance of colonial modernity over Indiaâ€™s resistant, indigenous culture”.

Subaltern Studies thus became a post-colonial critique of modern, European, and Enlightenment epistemologies; a national history from the backdoor, should one say, one that has had little connect to the actual subaltern on the ground who disappeared from the project to enable the indigenous Indian culture to emerge as the subaltern voice.

Nonetheless, while one ought to stand in solidarity with the students of JNU in their struggle against curtailment of free expression, etc, it is also a moment to ask other questions as well. The good national vs the bad national; the national vs the anti-national, and other such dichotomies are not effectively relevant, or less relevant unless one also reflects, as the philosopher John Rawls would say, on the moral quality of the actual collective life [in India], and elsewhere as well. The mainstream Indian culture (if one is permitted to use the word, and give it a longer history) has lacked a genuine and a perceptible egalitarian tradition. If at all, the tradition has emerged from the margins, but even then it has largely been employed more as a moral language than anything else, by those Indians who continue to set the terms of public and intellectual discourse in the country.

But have these “progressive” Indians also internalised the discourse, and tried to make it a part of their everyday moral life? There are countless unreported cases in the so-called politically sensitive campuses like JNU, where underprivileged students experience subtle forms of humiliation from people who never stop short of talking about equality and dignity in the public domain.

But unlike the privileged, they are too vulnerable to report them, or make any headway. Considering this dichotomy thus you may have the opportunity of meeting some very interesting brand of “progressive” people in India.

Those feminists who strongly espouse womenâ€™s rights but have a deep nationalist streak in them; a posse of leftist academics who claim they are not caste conscious, but do not always feel comfortable to supervise Dalit students through their research. And still,Â further, those “emancipated” souls who claim that meritocracy is socially constructed and depends on social location, yet cannot stop projecting their intellectual eminence as something intrinsic to them, etc.

It is this acute sense of the poor quality of moral life in India, and the associated inequalities, that made Rohith Vemula â€œfeel emptyâ€ and thus perceptively remark that, â€œThe value of a man was reduced to his immediate identity and nearest possibility; To a thing!â€ Vemula learnt from personal experience, that while the communists and leftist activists had given up their faith in God, they could not bring themselves up to abandon their faith in the caste system, and, should I add, their deep allegiance to the national sentiment.

He also became aware, as one of his friends wrote, not just of the Brahminical tendencies of individual CPI (Marxists) activists, but also the fact that Left parties including the CPI (Maoist), while they have had a loyal Dalit cadres in the lower ranks, they have never allowed a single Dalit as a politburo member, or to hold the leadership of the party, ever since they have existed.

This explains why social location continues to be a very important marker in understanding a variety of social and political inequalities in the Indian society, including the fact of some people being more “resilient”, while others committing suicide.

The national/anti-national debate has some relevance to it only when the informed Indian citizenry, and particularly its progressive opinion makers, learn to be genuinely sensitive to the plight of its oppressed people; learn to treat the Dalits and other marginal communities with dignity, not as favour, but as their genuine human right; accept the Indian Muslims as a people, who do not always need to put up a “progressive” stance; and allow the Kashmiris their legitimate right to determine their political future.

And perhaps equally importantly when politics in India and Indian universities becomes more than just being politically correct.

Idrees Kanth is a Fellow in History at the Asian Modernities and Traditions [AMT] research profile at Leiden University, The Netherlands