Home Accountability Joburgers on the #SecretBallot: â€œThese are issues that affect us, but they...
WhatsApp
Facebook
Twitter
Email
Print 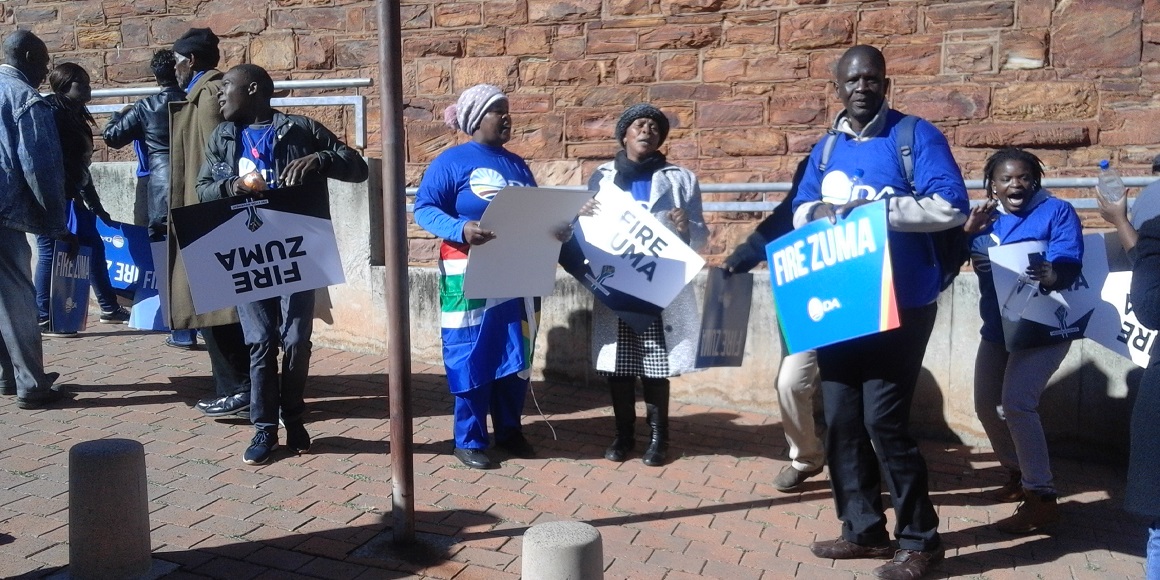 As the Constitutional Court heard the United Democratic Movementâ€™s arguments for a secret ballot in the vote of no confidence against Jacob Zuma on Monday, those outside navigated through a group of parked police vans to get on with their daily business. Before the arrival of the DAâ€™s Mmusi Maimane and the EFFâ€™s Julius Malema – arm in arm – buses dropped off small groups of political party supporters, who were carrying â€œZuma Must Fallâ€ signs, while an empty EFF truck played music. The Daily Vox spoke to some people outside the court and asked whether South Africa needs a secret ballot to get rid of President Zuma.

According to Deputy National Assembly speaker Lechesa Tsenoli, Parliamentary rules do not allow for MPs to vote using secret ballots. Thembelani Jwili wanted to know the motives behind voting in secret. Thembelani Jwili, 40, Roosevelt Park, temporary construction worker
Whether they vote in secret or not in Parliament is up to them. We donâ€™t know why theyâ€™re voting secretly, but at the same time, we donâ€™t know why they donâ€™t want to vote in secret. They always make decisions without us. These are issues that affect us, but they are not involving us in the decisions they make. But I guess it will be a good thing for them to vote in secret, because people will now be speaking up against corrupt people and that could get them into trouble. So rather the ballot paper speaks up and not an identifiable face.

An elderly woman who had been bussed in by the DA to support the court case believed strongly in the DAâ€™s service delivery, and in using a secret ballot to get rid of Zuma. Nomvula Khumalo, 60, White City, pensioner
Yes we need transparency, but transparency can only be attained through this secret voting. Weâ€™ve been struggling as black people, but we were ignored. This is going to help us a lot. Itâ€™s going to help everyone. I have already been helped, by the DA. They gave me electricity after 36 years, and now they are going to help the rest of South Africa today.

Politicians who have previously gone against their partyâ€™s voting policies have faced disciplinary punishment. For example, former ANC MP Ben Turok, who contested and abstained from voting for the passing of the Protection of State Information Bill back in 2011Â faced Â a disciplinary hearing. But is it right for political parties to discipline MPs who donâ€™t vote in line with party policies? Mashudu Mutau, 32, security guard, Soweto
I work as security guard here at Constitutional Hill and I will not lie to you, I donâ€™t know what is going on. I see DA buses, EFF trucks and police moving around, but I didnâ€™t know there was a case hearing inside. I feel that MPs should be allowed to secretly vote in the no confidence ballot. If they donâ€™t, then he [president] will see, but if he doesnâ€™t see who voted against him, then he will not target anyone. It wouldnâ€™t be fair for political parties to punish MPs for not voting in line with their party policies, because there is nothing wrong with people exercising their rights. There is nothing wrong there.

And a fed-up Anny Kaka captured the general sentiment when she reminded us that the Peopleâ€™s Parliament is meant to be accountable to people, not politicians. Anny Kaka, 32, Hillbrow
The people are the ones who put them in power, they need to listen to the people and answer to our issues. Of course members of parliament need to account to us and not to their parties because who are they truly representing? Us or them? People need to start listening to us. There are many things that are wrong that we want to bring up with them, but they donâ€™t care. They donâ€™t listen. South Africa is also ours, for the people. Not just them and their parties. Listening to their party bosses more than us wonâ€™t help.