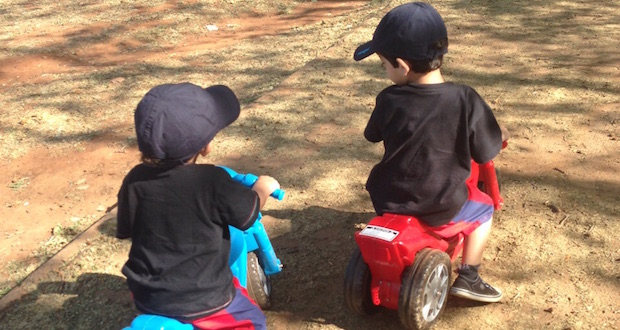 Johannesburgâ€™s northern suburbs are expanding rapidly but the number of schools in the region hasnâ€™t grown apace, leaving parents battling to find schools for their kids. Sunninghill mother of three FATIMA EBRAHIM* told Firdaus Khan about her struggle to find a public school for her kids.

Sunninghill really is a no man’s land for schools. There are little preschools all over Sunninghill but if youâ€™re unwilling to send your child to a private school, there arenâ€™t any options after that. My eldest child is 5, and needs to start Grade R next year. The closest government school is Rivonia Primary. When I checked with them two years ago, we fell into their catchment area but recently, they’ve had to cut back on the area they serve because of all the complexes coming up.

Sunninghill is growing. One complex comes up and suddenly thereâ€™s a hundred kids that need schooling. I sent an email once or twice to the department of education asking which schools service the area but they haven’t replied. Government hasnâ€™t built any schools north of Rivonia since the 40’s, when Rivonia Primary was built.

Siblings of current pupils are given first preference when they apply to a school. We applied at the beginning of the year and were rejected because of the number of siblings who had applied. After that I applied to four government schools in Bryanston, but we fell outside their catchment area. The next area we could’ve tried was Midrand, and we don’t want to travel all the way over there each day.

Everywhere you look, there are private schools. All the Jewish kids in this area go to King David, a private school, and a lot of parents are also putting their kids in Crawford, another private franchise. But in our family itâ€™s just my husband who is working, and to put that kind of pressure on one person is tough. Even if my kids did get into Rivonia Primary, there’s no government high school here in Sunninghill.

Iâ€™ve heard of people moving out of the area – or even out of Gauteng â€“ and having their husbands commute to work. We discussed moving back to Durban, and having my husband commute, just to make sure the kids would get into a good public school. I even considered home-schooling. We eventually decided to move to Bryanston, where there are more public schools.

My husband will now have to travel into Sunninghill from Bryanston each day. His colleague has moved to Linden to get his kids into those schools, and does the same. That’s what we are willing to do for quality schooling.

A lot of parents are having the same issue. Another mum I know from Sandton was rejected from the local school and from six other public schools that she applied to. There are people here who queue overnight to put in school applications. Applications are non-refundable and can go cost anywhere up to R3,000 so you can imagine how expensive this is. Itâ€™s horrific.

I read that a quarter of SA’s population is living in Gauteng, which is the problem. Everyone’s coming here for jobs, and they’re building houses and flats but they’re not building enough schools.

Whenever a complex or any residential development is approved, the education department needs to make sure they build enough schools to service that area. You can’t keep building and not providing services, hoping people will go to private schools.

I’ve spoken to people who are moving to Johannesburg, and I’ve told them to do their research. It doesn’t matter where you work, I tell them. The first thing you do is find a school for your kids, and then you find a house in the area.

– As told to Firdaus Khan
* Name has been changed