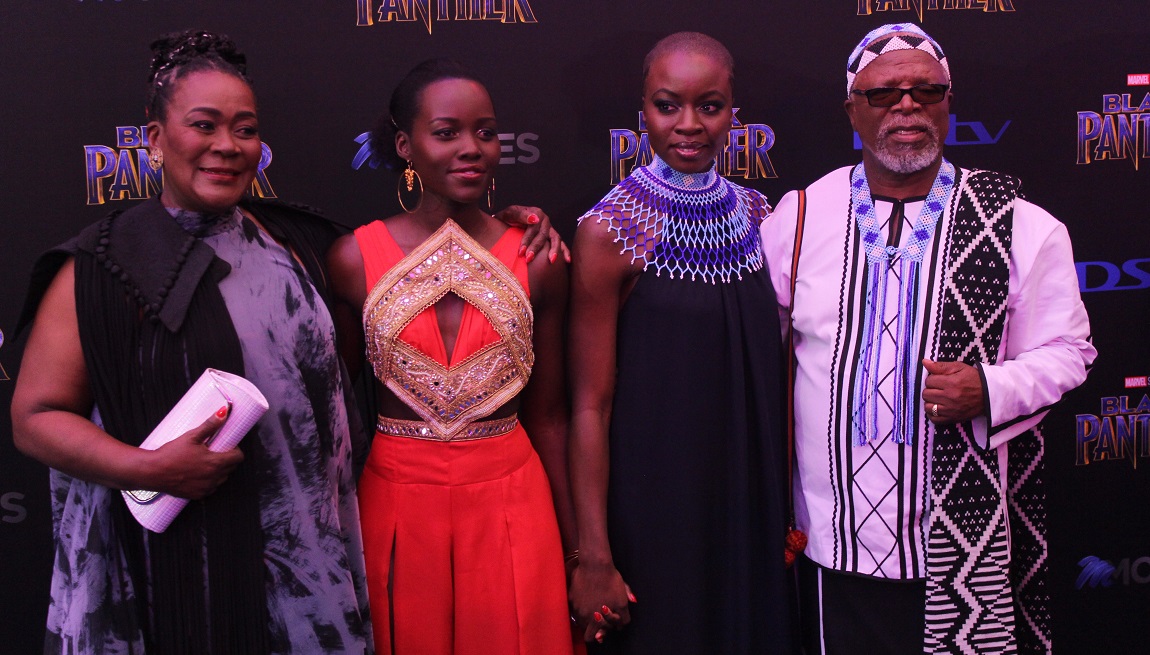 Our timelines were brimming with pictures of folk in their traditional best, declaring their love for Black Panther and desires to move to Wakanda after watching Black Panther in cinemas this weekend. The Marvel film premiered in cinemas across the African continent – and the South African premiere at Montecasino was extra special. It featured four of the filmâ€™s cast members and blue carpet studded with South African celebrities dressed in their most fashionable traditional garb.

The Daily Vox was there speaking to cast members and celebrities and just generally taking in the ambience.

Yo fam! We are at the premier of #BlackpantherSA and we are dying to see Lupita Nyongo. We will be live tweeting the red carpet so keep an eye out on our TL! pic.twitter.com/M9eEoMnOY2

The Daily Vox was thrilled to interview a few cast members on the blue carpet about the experience acting in the film, its conceptualisation, and its effect.

Our favourite veteran actress Connie Chiume spoke about being part of the cast in an international blockbuster. â€œThe set of Black Panther was something else. Those people have been in the game for a very long time. Theyâ€™re not afraid to invest finance into their movies. You go there, you are treated well, you are respected,â€ she said. Mamâ€™ Connie, who plays a mining elder in the film, said this treatment meant actors were happy to work hard on set.

Veteran actress mam’ Connie Chiume on being a part of the #BLACKPANTHER cast. #BlackPantherSA pic.twitter.com/9ZPoqDiEz1

Dr John Kani who plays King Tâ€™Chaka (the father of Tâ€™Challa, the Black Panther) spoke on the conceptualisation of Wakanda – and the budget that was put in place to represent African people as authentically as possible.

â€œThere has never been a producing house in Hollywood who wanted to make a movie about a black hero. It was easy to do Spiderman, to do Batman, because the market was there. Somebody had to take a chance and say Iâ€™m going to do this story. Itâ€™s about a country somewhere in Africa, and has a Black Panther as a hero,â€ he said. The sets, the costumes, the language was all geared to authenticity. â€œThe subtext is: we are Africans. Weâ€™ll hold the sun for one more time, it doesnâ€™t go to the West. Weâ€™ll dispel this myth about the dark continent of Africa. It ainâ€™t dark no more.â€

John Kani speaks on the conceptualising of Wakanda #BlackPantherSA pic.twitter.com/E1LGVYU50R

Lupita Nyongâ€™o – who plays Nakia, a Wakandan noblewoman, spy, and the love interest of Tâ€™Challa – was generally shook at how South Africans came through in their traditional garb. She spoke to The Daily Vox about Wakanda and the Black Panther effect.

â€œJust being here in South Africa and looking at how everyone is dressed, I feel like Iâ€™m in Wakanda. But obviously Wakanda is inspired by the real Africa. Itâ€™s just so powerful to see this dynamism even in the fashion sense and the expression and I donâ€™t know if this is the Black Panther effect or the Africa effect,â€ she said.

Babes Wodumoâ€™s Wololo had the cinema shaking when it played during the movie. Babes spoke to us in an interview with The Daily Vox us about being featured in the soundtrack and the future of gqom music. “It is an honour. I am so happy that I don’t even know what to do with myself. Imagine a girl from eThekwini being featured in Black Panther – that’s a big thing,â€ she said.

On gqom, Babes said: “This means that gqom is still going places. I mean it’s already international. People are now going to listen to a sound they are not used to, an usual sound, and also dance moves they never knew.”

.@BABESWODUMO answering what it meant for her being featured in the soundtrack of an international film #black panther pic.twitter.com/GzpCz2ky0I

We also spotted some South Africaâ€™s celebs doing the most, looking the best, making Nyongâ€™o feel like she was in Wakanda.

We spoke to writer and personality Khaya Dlanga about his Afrofuturist getup.

Okay fam, Khaya Dlanga outchea looking all black and gold at the #BlackPantherSA. Be honest y’all, what do y’all think?ðŸ‘€ pic.twitter.com/ZkX4UY055I

Presenter Anele Mdoda, who was also the host of the event, looked sleek in black.

Actor and presenter Tembisa Mdoda slayed us in white.

Listen, @tembisa is here and she is snatching edgesðŸ˜ðŸ˜ pic.twitter.com/LNbXyMsvnX