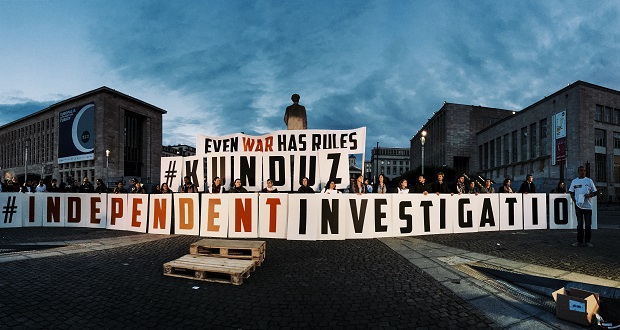 One year ago, on 3 October 2015, a Doctors Without Borders (MSF) hospital was attacked by a US warplane in the city of Kunduz, Afghanistan. Jonine Lotter, one of the survivors and an operating theatre nurse for MSF Southern Africa, recounted what happened that day at a briefing to commemorate the event.

This was my first assignment with MSF. I had been working as an operating theatre (OT) nurse for about a month and I could tell this hospital was very good. The OT staff really knew what they were doing; they were very, very good. We helped so many people in Kunduz and from the surroundings – ordinary people, from the streets.

This was the only hospital they could go to. I had the feeling that people knew who we were – if they saw us, they received recognition. I never felt scared or unwanted. In fact, I had the impression that people really wanted us there, they were pleased with the work we were doing.

Early in the morning of the 28th of September 2015, fighting broke out between the Taliban and the Afghan National Army and their allies. Nine international MSF medical team members worked alongside Afghan colleagues to provide medical treatment around the clock for the next five days.

We would work, sleep and eat inside the hospital, because it was too dangerous to leave the grounds, sometimes even too dangerous to go outside the hospital building, for fear of stray bullets hitting you. You could hear shooting going on in the city. But the fighting never came inside our compound. It sounded like the fighters knew that we were a hospital and that we treated wounded people.

When the wounded started arriving it was unbelievable, it was astronomical. The board listing names of people to undergo surgery was full, and as soon as we cleared one name after an operation, there were two more that had come in. From the sheer number of patients coming to our hospital and the kind of wounds we were treating, I could tell something very bad was going on outside the walls of our hospital.

We all started to believe that the hospital was the safest place in Kunduz City. Outside the walls of the hospital, a war was being fought with bombs, planes and machine guns by trained soldiers and fighters. Inside we could only see wounded patients and medical staff providing life-saving treatment.

Medical supplies were running low. All roads to Kunduz city were blocked. By the morning of the 2nd of October, the sound of gunfire died down. We thought that maybe we could get through the emergency cases requiring surgery by the next morning. Around midnight I left the operating room to get some sleep. My colleagues were still operating on seriously injured patients inside the hospital.

Just after 2am on the 3rd of October 2015, an American warplane circling overhead attacked the hospital, firing countless rounds at the hospital building. Within a matter of minutes, the whole hospital was in flames. People who tried to run for safety were shot down as they [the plane] flew overhead.

The meeting room in the hospital grounds became a triage room. A few hours earlier these were my colleagues, now I had to treat their wounds, they became patients. The horror we faced inside that room is still too much for me to talk about.

It was very difficult to accept our hospital was no more. It was the only facility offering trauma care to the people of Kunduz and surrounding areas. But even if there was no fighting, people would still get hurt in car accidents, or otherwise. Where do they go to now? How do you live this way? There is nowhere else to go. Without means to afford a taxi to drive to Kabul, what happens to them? They just wait, to die.

MSF demanded an independent investigation into what happened that morning, when a hospital full of patients and medical staff got attacked by an American warplane. To this date, this request has gone unanswered.

Fourteen MSF staff members, four caretakers and 24 patients died inside the hospital that day, burned to death, or blown into unrecognisable pieces. It is a year later, and we are still waiting for an independent investigation, not only on why the hospital in Kunduz was targeted and destroyed, but on why hospitals in Syria, Yemen and Sudan are still being attacked and destroyed today.

All images courtesy of MSF