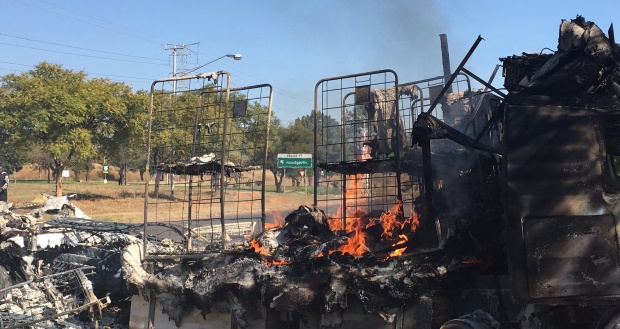 The attention of South Africa has been on Tshwane as protests over the nomination of Thoko Didiza as the ANCâ€™s mayoral candidate in the capital quickly turned violent. Vehicles have been set alight, shops looted and now, even journalists trying to get to the truth have been attacked, intimidated and robbed. The Daily Vox rounds up which of our comrades have fallen victim to the violence of #TshwaneUnrest.

1. After a live report on the protests on Wednesday night, an eNCA journalist and camerawoman were robbed of their filming equipment. Jody Jacobs and Noluthando Hlophe had just finished their report when, they said, three men approached them and aggressively took their equipment from them. In a Facebook post, Jacobs said that the experience has not however made him lose his enthusiasm for the job but he realises it has become a lot more difficult to do the work of a journalist.

We have just been robbed. All our equipment taken in Mamelodi @eNCA

2. Horisani Sithole, an SABC journalist says he was bitten by protesters while reporting on the looting taking place in Mabopane. He also said that his wallet was emptied and his car keys were taken away. His car was also damaged during the attacks.

Car keys were taken, and my wallet searched, all the money stolen by the mob. #Mabopane looting underway #SABCNews

3. AFP photographer, Mujahid Safodien and other journalists, were victims of looters when they were mugged on Wednesday.Â Daily Vox Contributor, Gulshan Khan was part of the group when they were accosted by looters in Ga-Rankuwa. She said,â€œWe basically came up to a shop where they were looting and we pretty much got attacked because we had cameras and we were media, and they didnâ€™t want to be identified or their pictures to be taken.â€ Safodienâ€™s phone, and another journalist’s camera were taken away, but the journalist managed to get it back with the SD card removed. Police were present but there was not much they could do about the looting, and there was a struggle but no one was hurt. She said the protesters seemed preoccupied with not being photographed and didnâ€™t want to be identified. Â

4. On Wednesday, News24 journalists Karabo Ngoepe and Jeff Wicks were assaulted and intimidated by police officers while trying to cover the protests that have been taking place in Ga-Rankuwa. Their phones were taken away from them and the pictures and videos they had taken were deleted. The two journalists have opened up a case of assault and intimidation against the police.

Ngoepe wrote about the events: â€œSouth Africa, the media is not your enemy. We in the media are part of society, we are part of the community, we are residents of these very same townships that are burning. We don’t find joy in what is happening but because that is our job and what allows us to put food on the table, we have to report.â€

Great piece by @karabongoepe1. We as journalists are soft targets & it’s getting worse. https://t.co/KSinER3O6c via @News24

The chairperson of the South African Editors Forum, Mpumelelo MkhabelaÂ has condemned the attacks on journalists, saying they are just trying to do their job and cover what has been taking place. He told EWN: â€œThey should be allowed to work freely; itâ€™s the Constitutional right and obligation to do so without any interruption. We would like to urge not only protesters, but ordinary South Africans who are law abiding [citizens] to protect journalists. In addition, we would like to urge the police to help journalists.â€

We at The Daily Vox commend the great work that our fellow journalists are doing, and condemn the violence and intimidation that they have come under for doing their jobs. Stay safe out there, friends.

*Editors’ note: This story has been updated with comment from Gulshan Khan.