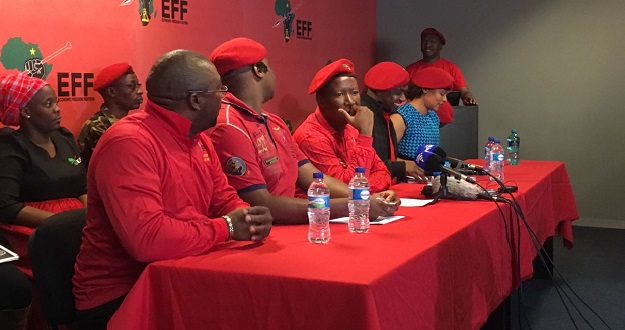 Minutes beforeÂ he was served papers to appear in court on charges of trespassing and riotous assembly related to alleged actions in 2014, the Commander in Chief of the Economic Freedom Fighters, held a press conference at the party’s headquarters in Braamfontein. On the agenda, Pravin Gordhan, the decline of the ANC (obvs), Â and the continuing student protests.Â

1. Julius Malema reiterated the support of the Economic Freedom Fighters for the studentsâ€™ protest.

â€œThe EFF is unapologetically behind the student struggles in all South African universities and universities of technology for the provision of free, quality education.â€

2. He says free education is possible, but the current government will not make it happen.

3. He also warned against further violent crackdowns on students

â€œWe call on all the police and security forces to act with restraint because South Africa does not want another Marikana massacre inflicted on students by the violent and murderous regime of the ANC,â€ he said.

4. The EFF leadershipÂ is not afraid to be on the picket lines

5. Students should not be discouraged

â€œPain will always be there, but after the pain you will all rejoice and say you worked very hard. Not only you, but the many generations that are going to come after you. They will salute you and they will hold you in high regard like they do with 1976. Donâ€™t be discouraged by rubber bullets, the holding cells or the teargas,â€ he said.

6. According to Juju, ANC-aligned student organisations are not to be trusted.

â€œANC aligned students formation cannot be relied on. Rely on the Fees Must Fall movement, rely on the EFF Student Command. They are there to ensure that this genuine cause is achieved in our lifetime,â€ Malema said.

7. The EFF will be presenting its own funding model for free higher education.

â€œThe EFF will soon be tabling a proposal on how free education should be financed in South Africa and this proposal will need the unwavering support of all sectors of society inclusive of workers, the corporate sectors, civil society, students and the government. There is money in South Africa to fund free education for all,â€ Malema said.

8. The protests in support of Pravin Gordhan on November 2 in Pretoria will include the demand for free education. This is the list of demands as tabled by the CIC: