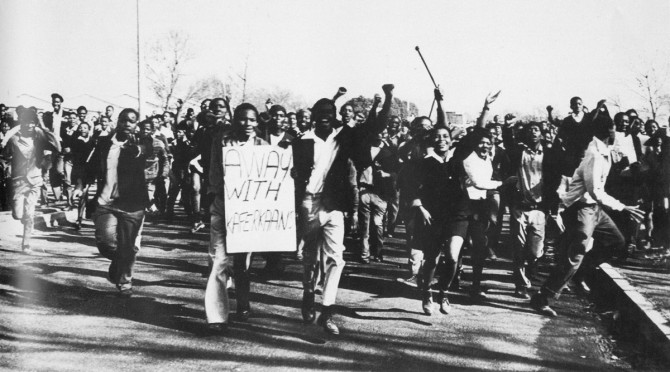 On June 16 students across Soweto revolted against a law that made Afrikaans the language of instruction in African schools across the country. The apartheid regime met the student protestors with a brutality that shocked the world and was a turning point in the fight against apartheid. Here are five quotes that summarise the story.

1. On why Africans needed to learn Afrikaans

“An African might find that that “the big boss” only spoke Afrikaans or English. It would be to his advantage to know both languages.”

“They would be sitting in my car, telling me what it is like to be a student in South Africa, to be taught history and mathematics in Afrikaans by a black teacher who did not know Afrikaans himself and who had to consult a textbook to find out what a triangle or an angle was all about.”

3. On the original march

“Our original plan was just to get to Orlando West, pledge our solidarity and sing Nkosi Sikelel’ iAfrika. Then we thought we would have made our point and we would go back home. No-one envisaged a process that would go beyond June 16th. Little did we expect the kind of reaction that we got from the police on that day.”

Murphy Morobe, an organiser of the march

“The police believed strongly that the ANC was behind the uprising. They believed that all the members of the Action Committee were ANC. We were not ANC at all but they didn’t buy that.”

Seth Mazibuko, an organiser of the march

5. On the violence that continued

“On June 17, I watched as bodies were dragged out of what had been a shopping centre on the Old Patch Road (sic). I saw figures running out of the shop, some carrying goods. They ran across the veld like wild animals, dropping like bags as bullets hit them. I saw billows of smoke shoot up as the white vehicles burned. I thought the world had come to an end. I saw leaders inside and outside Soweto plead for reason and I saw people detained and killed.”