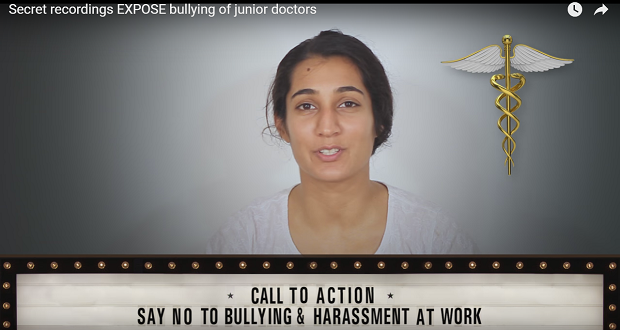 Yumna Moosa, a graduate of the University of Cape Town, was working as an intern to earn her qualification as a medical doctorÂ whenÂ she experienced harassment at the hands of her supervisors. She released a video on Friday detailing the harassment and humiliation that a senior doctor put her through. When MoosaÂ reported this harassment, she recorded the conversation with the senior doctors and placed it in a video.

The recordings are from a formal meeting with management and show a senior doctor advising her to destroy her logbook in which she recorded the incident and feedback she got about it and instead note down that what she said â€œwas inappropriate”.

Their argument was that no one else had complained.

Moosa howeverÂ found five other junior doctors who have submitted a case at this hospital. Itâ€™s not that no one had complained, itâ€™s that they were scared of what would happen to them.

Speaking to The Daily Vox, Moosa said other people had also confided in her their experiences at the hospital. She says others who complained were told, â€œremove your complaint or I wonâ€™t sign you off.â€ She thinks that these things happen because medicine is a very old institution headed by men.

â€œMedicine in particular is very old school and itâ€™s this strange old boys club that prepares us to have this inflated sense of self. I think the internship is like this initiation where they treat you badly so that youâ€™re ready to take on a new position in the hierarchy afterwards,â€ she said.

After she had made the complaint the head of the department wrote that after two years of internship, MoosaÂ had worse clinical skills than a university grad and needed to be retrained â€œbecause she was unsafeâ€.

â€œIn order to assist my career they were sabotaging it so that I would learn a lesson in what it means to be a good doctor, and so would my colleagues,â€ she saysÂ in the video.

They also told her that they’re considering removing the feedback section from logbooks so other junior doctors don’t “get into trouble”.

Moosa pointed out that this is not unique to South Africa.

SheÂ likens medicine at an organisational level to a military hierarchy, and says that she doesn’t see why it’s necessary for things to be like that.

â€œI honestly believe in the healing power of kindness and mutual respect, and the importance of honest communication to avoid deadly mistakes,â€ she said in the video.

SheÂ wants this video to give others hope to speak out against this harassment, she says people need to start objecting to what is happening. â€œLots of things happen to you but when you see it happening, because all of it is written and every single medical student, every single intern, every single junior doctor has witnessed this and has been silent about it,â€ she said.

She says that this has been a long process but that the institutions to get help, the CCMA (Commission for Conciliation, Mediation and Arbitration) and HPCSA (Health Professions Council of South Africa), are working on it.

â€œWe want this to be a positive story, so we donâ€™t want it to discourage people from complaining and speaking out,â€ she said.