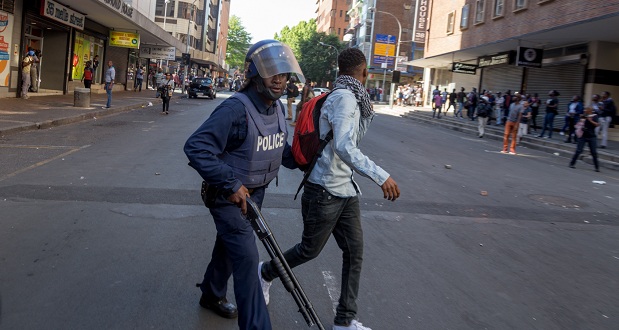 Justice and correctional services minister Ronald Lamola addressed the National Council of Provinces (NCOP) in parliament. He said he had been informed about the call by students for the blanket presidential pardon. Lamola was questioned on whether any progress has been made in securing presidential pardons for students who were arrested during the Fees Must Fall (FMF) protests.

The minister said a blanket pardon was not possible. The only options for students Lamola said was to ask for a presidential pardon or expungement of criminal records.

Lamola said the #FeesMustFall students have not yet honoured an agreement to submit a list of students wanting to be released from prison via a presidential pardon or getting an expungement of a criminal record. He says the department hands are tied now.

“Since the offer was made to date, the department of justice and constitutional development has not received such a list from the student leaders,” said Lamola adding that they have also not received any applications for expungement.

Lamola said the process of a presidential pardon is at the discretion of the president whether he wants to give it or not. He said the department can help students by filling out the forms and to create a substantive application.

“The department stands ready to that – if and when the need arises. We will do that if we receive the application,” said Lamola. He acknowledged the importance of the fight for access to higher education.

Masutha said the ministry will help the students to approach the National Prosecuting Authority (NPA) and to get their cases reviewed. The former minister said it should be noted Presidential Pardons are only granted to sentenced and convicted people.

In 2018 several Fees Must Fall activists including Mcebo Dlamini, Bonginkosi Khanyile and Khanya Cekeshe raised questions around the criminal records brought against them during the protests. Dlamini and Khanyile marched to the Union Buildings calling on President Cyril Ramaphosa to grant them a pardon. They wanted the charges against them to be dropped.

Khanyile is currently serving a three-year house arrest sentence. This week the department of correctional services relaxed the conditions of his house arrest.

Within the government, the Economic Freedom Fighters (EFF) were the only political party to support the calls for amnesty. They raised the question with Lamola regarding the pardons.

The party’s Mbuyiseni Ndlozi said the EFF wants all charges and sentences against the activists to be dropped with immediate effect, “particularly by the universities that have expelled all these activists, let all those expulsions fall. Allow the children to come back and focus on their studies”.

Dlamini was charged with violating a court order, public violence, assault, theft, and damage to property. This was for acts during the 2016 FMF protests. Dlamini marched in August 2017 asking for the pardon. His march came days after Khanyile was convicted for public violence.

At the time Dlamini told The Daily Vox that there are around 567 students who have been charged.

“Well they have to drop the charges without any conditions. And then they can form some form of a TRC to look at the matters of Fees Must Fall,” said Dlamini.

According to reports, 619 people were arrested during the 2015-2016 Fees Must Fall protests. The charges ranged from public destruction of property to arson. Many students were even charged but were not aware of it. In 2017, The Daily Vox reported how several Fees Must Fall activists were surprised to find out they had criminal records. It turned out that their charges brought against during the protests were not dropped.

Kanya Cekeshe remains the only FMF activist still behind bars. Earlier this year Khanyile was granted a suspended sentence and placed under house arrest. Cekeshe was imprisoned for setting fire to a police van during the protests. He admitted in court to dousing a “SAPS [South African Police Service] vehicle with the paraffin. I then set fire to this SAPS vehicle with my own matches.” The vehicle was destroyed but no one was injured, he said.

Earlier this year Cekeshe petitioned the high court saying his former lawyer was not prepared for the case and that he did not get a fair trial. He was sentenced to eight years in Leeuwkop, of which three years were suspended.

During the first State of the Nation debate for the sixth democratic administration, new members of parliament Naledi Chirwa and Nompendulo Mkhatshwa both spoke on the issue. They used their first speeches to raise awareness about the number of FMF activists still charged with public violence and destruction of public property.

Chirwa said: “Your government is responsible for many and the most heinous of crimes. You jailed Kanya Cekeshe, you jailed Bonginkosi Khanyile and are complicit for the brutal murders Benjamin Phehla, of Bongani Madonsela just because they asked for a free education that you promised them when they were still toddlers in 1994,” she said.