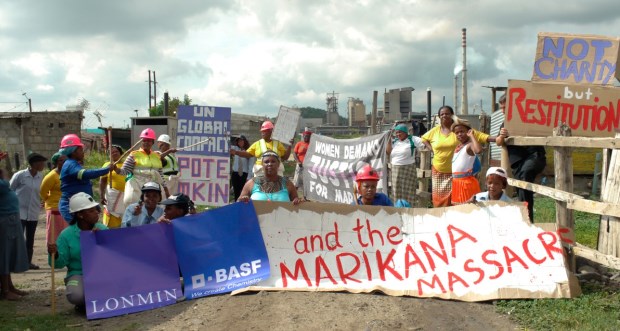 Lonmin is the multinational mining company where a strike for a living wage led to the death of 44 people, 34 of whom were brutally gunned down in a single day by SAPS. On the 29th April 2016, BASF, a principal customer of Lonmin will be hosting their annual shareholders’Â meeting. Apart from the usual attendees, a South African delegation which includes two of the women made widows by the Marikana massacre will be present, calling for justice for Marikana.Â KOKETSO MOETI lists four reasons why we should care about this meeting.

1. Lonmin clearly wonâ€™t take responsibility on its own
The Farlam Commission report found that Lonmin did not sufficiently try to engage with workers on ending the strike or protect its employees. The report also recommended that Lonmin â€œbe investigated for knowing the risks but failing to protect employeesâ€. Apart from this, Lonmin was found to be complicit in the poor conditions in which mineworkers lived, those conditions that led to the Marikana massacre. Another damning report by the Alternative Information and Development Centre (AIDC) shows that the company could afford the living wages demanded by the mine workers. It also found that Lonmin was involved in profit shifting and abuse of the transfer price mechanism. Itâ€™s important that customers and investors in Lonmin actively support the call for justice.

2. BASF prides itself on being a founding member of the United Nations Global Compact
The Global Compact is â€œa call to companies to align strategies and operations with universal principles on human rights, labour, environment and anti-corruption, and take actions that advance societal goalsâ€. BASF continues to brag about this, yet is the principal customer of a company that reneged on its duties as far as its workers are concerned, leading to deadly consequences. Surely as an entity that claims to be concerned with human rights, BASF should take responsibility in ensuring that these rights are upheld throughout its supply chain?

3. Justice for Marikana is about more than Marikana
Marikana is a microcosm of South African society and the lead up to the massacre had features of the everyday exploitation of black workers, poverty, inhumane living and working conditions. Itâ€™s also about the ruthless profit-maximising ways that the extractive sector has always operated in South Africa, and justice for Marikana would be a symbolic victory for many others working tirelessly to hold corporates to account.

4. We canâ€™t allow “business as usual”
Almost four years later, many of the families affected are struggling to make ends meet after the brutal murder of their loved ones, many of whom were breadwinners in their respective households. The injured miners, some of who are no longer able to work and have medical requirements, are also yet to be compensated. Apart from that, very little has changed for this community, after such a tragic spotlight was put on the conditions in which they work and live. Not to address these conditions would be to allow for those slain to have died in vain.

Koketso Moeti is the founder of amandla.mobi. This article was supported by the Heinrich BÃ¶ll Foundation.