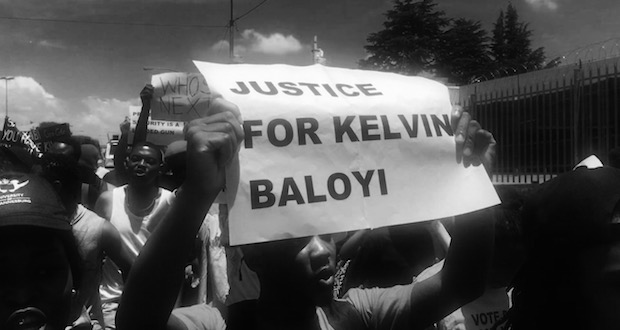 On Thursday University of Johannesburg (UJ) students and community leaders from around Gauteng marched in protest of the death of UJ student, Kelvin Baloyi, who was shot and killed at a UJ off-campus residence. The students intendedto hand over a memorandum to UJ Vice-Chancellor Ihron Rensburg demanding #JusticeForKelvin. The Daily Vox spoke to Fola Mithani, a family friend, on Baloyiâ€™s role in his family and contribution to the Bekkersdal community.

“Iâ€™m here today as a leader. As a leader of a community, I need to be here to give support to the students to say that whatever you are fighting for – itâ€™s a genuine cause. We want justice to be served for the loss of Kelvin. Kelvin Baloyi is someone Iâ€™ve known from an early age – from when he was a boy. He started school in Ipeleng and went on to Kgothalang Senior Secondary School. He was a student at the University of Johannesburg. This is how I know Kelvin. The last time I spoke to Kelvin was on the issues that affect the students within his campus.

On way to UJ APK. Police say they must remain 100m from UJ campus. Students want to hand over memorandum to their VC #JusticeForKelvin pic.twitter.com/QGpPbtzto4

Kelvin was a humble boy. A respectable person within the â€˜hood who assisted kids with their homework for free. He never demanded even a cent for tutoring. Kalvin was also the sole breadwinner for his family.

We are going to fight for Kelvin to get justice. Justice must be served on the matter surrounding Kelvinâ€™s death. We believe as a community that Kelvin was targeted, because Kelvin was a leader mobilising for free quality education in this country.

The only person from Kelvinâ€™s family who Iâ€™ve managed to speak to is his sister. His sister is completely demoralised – I donâ€™t even know how to explain the state sheâ€™s in. I met with her on Monday, trying to get a clear sense of what transpired on that particular day [of Kelvinâ€™s death]. I could hardly look at her, she was utterly down – hopeless. People were expecting so much out of him because he was the breadwinner. He used to play a major and important role in our community, by giving back the knowledge that he had. Fighting for education. Hence he died in the struggle for free quality education.”