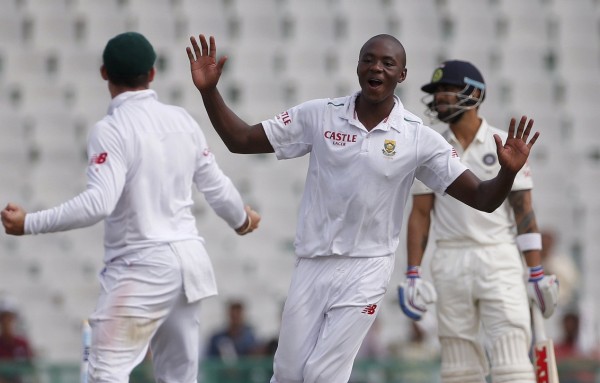 Kagiso Rabada’s first five wicket haul in test cricket couldn’t have come at a better time. With Dale Steyn and Vernon Philander battling with injuries, the Proteas need a new star. Nay, they need aÂ superstar to come to the party. And they may just have found him.

The 20-year old’s figures of 5/78 belie his performance. He beat the bat with impunity; a consistency outside the off-stump not seen since the days in which Shaun Pollock strutted his stuff. In his tenth test match, Rabada couldn’t have done better, and we couldn’t have asked for more.Â Here are his wickets, as they happened.

1. First came Alex Hales. The big opening bat poked at one outside the off stump and AB de Villiers welcomed the gesture with both hands.

WICKET – @AlexHales1 is caught at slip driving loosely at Rabada. Out for 1. England 10/1 http://t.co/XYFW99n32i pic.twitter.com/rWReZryA2j

2. Then came Nick Compton. The stylish right-hand, fresh from some good scores earlier in the series, also fell to Rabada’s discipline outside that offstump.Â

3. Then the big one. Joe Root. Root looked in imperious form, carving a splendid century (110 off 139 balls) and never looked like getting out. But early this morning he was gone. Rabada again.

4. What a corker. And the world’s most irritating (and talented!) Stuart Broad was on his way.

5. With 9 wickets down, andÂ Jonny Bairstow hitting out, it was a rather fitting end when Rabada got rid of him too. Rabada’s finished with 5/78, his first five-wicket toll in test cricket. His previous best was 3/175 against the same opponents in Cape Town earlier this month.