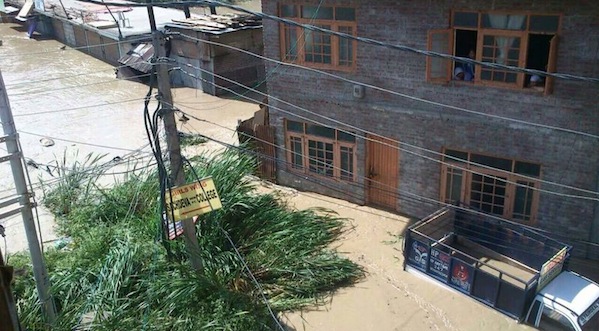 Kashmir has always welcomed rain. It is considered a good omen.

But this time the rain has proved to be an omen of devastation.

It is the third day now that I have not talked to my family and friends in Kashmir. It is a really hard time for me and for all who are either caught in this havoc or who find themselves far from their families caught in it.

This generation of Kashmiris has never seen floods like this.

The flooding is the worst in more than five decades, affecting 2,500 villages and resulting in the deaths of almost 200 people.

The reports coming from the ground about rescue and relief are making me even more worried about the scale of devastation these rains have brought.

The situation is grim and I am constantly trying to get in touch with any family member, neighbor or friend.

The last time I spoke to my father and mother was on Saturday. And when we spoke, his gloomy voice told a thousand tales.

The common man in Kashmir puts his life savings into building a house in which to live.

The floods have washed away away these symbols of success, strife and stability; and where they have stood up to the gushing water, ordinary Kashmiris have had to leave these hard earned houses behind and flee to safety as water levels continued to rise.

Many homes have flooded up to the second floor, leaving people trapped on rooftops, awaiting rescue.

When the rains began, my family simply shifted all their belongings from the first floor to the second floor, hoping things would improve. But the incessant rains eventually forced them to evacuate, leaving everything where it was, and they moved to my uncleâ€™s home, which was considered safer.

Everyone is trying to help each other by whatever means they have, and young volunteers are doing commendable work evacuating people from their houses, and seting up temporary camps to provide whatever relief they can.

But the devastation is heartbreaking and the consequences are going to be much harder to deal with.

The lack of communications has made relief efforts haphazard, and left people without any way to contact family members. No one knows exactly what the situation is around Kashmir, particularly in the rural areas.

The big question in my mind right now is for the daily needs of those affected by the floods – essential medicines, water and food.

I hope that people around the globe will understand the gravity of what has happened here in Kashmir and will try to provide whatever help they can to the people of this land.

We have lost all our resources.

Our houses are damaged; our rice fields have drowned.

Our economic situation may take years to stabilise.

The commercial hub Srinagar was hit the worst. Essential goods were washed out of shops and people are now totally dependent on whatever aid they can get. There is a dire need for basic essentials like food and water.

I am hopeful that, as announced by state government, communications will be restored in the next three days.

This would bring some relief to those waiting to hear news from their families.

But paradise is no more. The paradise which we call it is now no more the same. The chinar trees stand leafless, the gardens have been stripped of their multi-coloured flowers, the rain drops no longer glitter in the air like they once did.

There is only devastation. People do not smile, and children do not play with their toys. Men despair and women wailing in grief.

Still, an old Kashmiri saying comes to mind: “Sheen gali wande cheli beai yee bahar.” Winter will be over, the snow will melt, the pleasant summer season will come once again. Ahmad Mukhtiyar is a freelance documentary film maker and photographer from Srinagar, Kashmir.Â