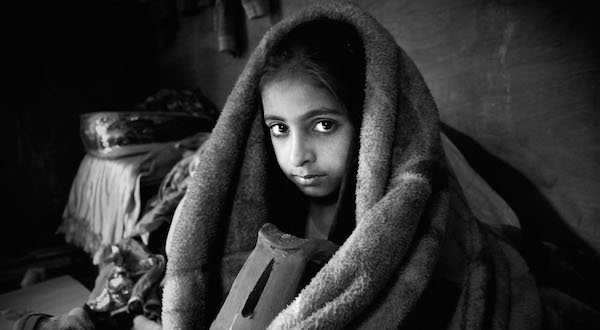 This past September, devastating floods and landslides in Jammu and Kashmir, led to the deaths of nearly 300 people. In addition, more than 253,000 homes and 648,000 hectares of crop land were damaged or destroyed. A government assessment has estimated that Kashmir has suffered a loss of at least one trillian Indian rupees (about R184-billion).

Even after three months, 200,000 individuals are still displaced. Most of them are children, living with their families in tents or in temporary tin sheds, preparing to weather the harsh Kashmiri winter.

Local psychiatrists say that in the immediate aftermath of the floods, Kashmiris showed significant resilience, but the prolonged displacement in harsh weather conditions may have severe psychological impact on people in general and children in particular. The situation is aggravated due to insufficient infrastructural support. There are no psychiatric clinics for children presently in the state.

â€œPeople have not lost their houses, but their homes, and culturally people in Kashmir have greater attachment to their homes. We are receiving the cases where displaced people need counselling or medication,â€ said Dr Irshad, a noted psychiatrist who works in the governmentâ€™s only psychiatric hospital in Kashmir.

People not only have lost their homes, but their businesses and sources of livelihood as well. Kashmiris in rural areas rely primarily on agriculture and this year many of them have lost their harvest. People also fear a food crisis in coming months. The state governmentâ€™s ration of 35kg of rice to affected families is insufficient.

Despite demands from international civil society groups, the Indian government did not allow foreign aid into the flood affected state. Some international NGOâ€™s, such as ActionAid, which already had a limited mandate in Kashmir, are working to distribute essential food and non-food items and also providing psycho-social and medical support. Most of the relief work has been done by student led groups and the pro-freedom parties in the region.

â€œUnder its immediate flood response program, ActionAid like other NGOâ€™s distributed food, medicine and non-food items to the affected, which was the prime need of the people and under our long term program we are providing livelihood support and psycho-social care to the affected people including children. But NGOs canâ€™t do much, major help needs to come from the government,â€ said Tanveer Ahmad Dar, the project manager for ActionAid in Kashmir. Faheem (age 4) is from the Pulwama region of Kashmir. His house was damaged after the river Jhelum overflowed from its banks, completely destroying hundreds of houses. His family now lives in a single-room temporary shed in the village. He spends the whole day in the shed, but at night the family shifts him to a nearby relativeâ€™s house to avoid the cold. â€œI want to sleep with my parents in my own home. I miss them during night ,â€ says Faheem. Muskaan (age 5), Faheemâ€™s sister, says that she lost all her toys and books due to the flood and now she has to stay idle for the whole day inside the shed. â€œI miss my toys and books most. I donâ€™t know whether my family will be able to get new ones for me or not,â€ said Muskaan. Sahil (ago 2), who is also from Pulwama, lost his two storey house in the floods. His family managed to flee before water reached the village and, along with other villagers, spent five days in the open air on a high levelled railway track without food and water. The family now lives in a temporary shed which they constructed after receiving 75,000 Indian rupees from the government. Sahilâ€™s family says he has become frail since the flood, feels scared to go outside and hardly leaves his motherâ€™s lap. Shahzeb (age 4) also lost his house, which suffered severe damage and was declared unsafe by experts. The family lived in a village community centre for one month before dismantling their house and constructing a one room shed using the 3,800 Indian Rupees they received as relief from the government. A kangri – a traditional Kashmiri firepot encased in a wicker frame – is the only source of heating for the family. â€œIt is very cold both inside and outside the shed. My hands and feet get numb every time, so I donâ€™t want to leave the Kangri,â€ Shahzeb said. Samreen (age 5) from Uri, Kashmir, lost her home and her school due to a flash flood in her village. Now, her village has a stream flowing through the area where their house once stood. The family lives in a temporary tin shed constructed on state land a kilometre away from the village. â€œWe lost everything at our home, but no one came to help us. We donâ€™t have sufficient blankets, bedding, clothes and food. We need help from someone to rebuild our house,â€ said Samreen. Rukhsana (age 5), from Uri, Kashmir, lost her home after the nearby stream breached the banks, changed its course and swept away the whole village. Her family, along with the other villagers, now live in tents on government land outside the village. â€œMy village has turned into a river now. The government is yet to repair the bunds so it is unsafe to go back to the village. I donâ€™t want to live in tents here either. It is hard to live in tents in the cold. We will die any time here,â€ said Rukhsana. Adil (age 2, left) and Shahid (age 3, right) from Kulgam, Kashmir not only lost their homes, but their agricultural land and crop as well. Their family, along with 37 other families, live in tents outside a government hospital building which is still under construction three kilometres away from their village. His family received 35kg of free rice from the government and other food items from NGOs. However, this amount is not sufficient to last through the four months of winter, during which it is hard to get work. â€œSince the flood, our family has cooked the same food. We are fed up of eating rice and pulses only,â€ they said. Nasreena (age 9) from Uri, Kashmir lives in a single room in government building along with nine other family members after their house was fully damaged. Her school building was also damaged and the government decided to delay the annual examination by four months. She sits at home, drawing pictures of her memories of the floods. â€œI am unable to forget the scenes of my village when the flood hit it from all sides. I want to preserve those scenes in my drawing book now,â€ Nasreena said. After they lost their house, Junaid (age 9, back) and Mujeeb (age 6, front), two brothers, now live in a government owned building that is under construction in Kulgam, Kashmir. The four-member family shares a single room with another five-member family in the building.â€œWe received some help from NGOâ€™s initially, who gave us ration and blankets. But there has been no further help from anyone. Here, there is no electricity, no drinking water, no sanitation facility and no privacy. It is very crowded here. We want the government to shift us to some other place.â€

Afzal Sofi is a journalist in Srinagar, Kashmir.