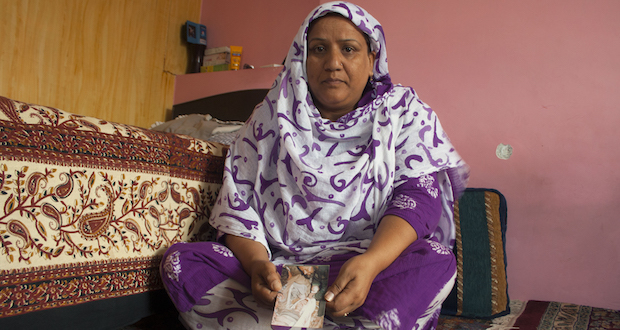 MUNAWARA SULTAN (47), from Indian-administered Kashmir, has spent 22 years fighting for justice after her husband was killed while in the custody of the Indian Army.

Gowhar and I were married on December 2, 1992. The wedding was meant to have taken place a month earlier but the rebellion in Kashmir was at its peak at the time, and so it was postponed.

Many young people in Kashmir had taken up arms to fight the Indian rule in Kashmir that year. Strikes, curfews and bomb blasts were common those days. In my hometown, Batamaloo, a stronghold for militants, many locals boys joined the ranks.

Four months after my marriage I returned to my parental home for the festival of Eid. A day before my visit, there was an explosion near a school in our neighbourhood. The area was cordoned off and people were not allowed to leave their homes.

Whenever an incident like this took place the army would crack down on the locals. The very next morning at dawn, the loudspeakers in the mosques reverberated and called people to assemble at a nearby bus stand for an identification parade.

These identification parades become routine at the time and no man dared not to go. Like thousands of other people, my brother, my father and Gowhar also went out to take part. The men were made to stand in front of a 4×4 in which the informers sat, wearing masks. These informants would identify certain people among locals, who would later be bundled into the 4x4s arrested, killed or disappeared. This is what we had seen in the past.

My husband, being very humble and kind at heart, made one mistake that day – he had begun to distribute a big bucket of water among children and old men who were made to wait at the bus stand from 4am. The army men had objected to it and Gowhar had some argument with them. Later that day, they took him away while he was on his way home and he never returned.

We heard three gunshots that afternoon, outside our home. Little did I know it was Gowhar being killed.

After he went missing, my father went out to search for him in the police control room. Even as police officers assured him that Gowhar would be released, two dead bodies were brought into the control room. One of them was Gowhar’s body; there were bullet holes in his head and chest.

On that fateful day I was widowed. I was four months pregnant.

My world fell apart. I saw the joy of being a bride for just four months and I have not had any happiness since. My husband never saw his child and my son never saw his father. The army day did not only kill my husband; they killed all three of us.

It has been 22 years and I am still fighting the case from one court to other, from one police station to other.

The army men who killed my husband and picked him up in front of thousands of people are being shielded under the Armed Force Special Powers Act (AFSPA), which gives army officers immunity for any actions taken in areas deemed as “disturbed”. This act is shielding the blood-stained hands of Indian army men in Kashmir who had resorted to a “Catch and Kill” operation when my husband was killed.

There is long list of legal procedures that I went through in these 20 years. It will take me days and nights to explain. Even if I don’t get justice in Kashmir, I will move to the Supreme Court, I will move to Geneva, I will go anywhere in the world while I am alive. I know I won’t get my husband back but I will fight to get justice.

This hasn’t happened to me only. This is the story of thousands of families in Kashmir.

My son would always ask about his father. His questions would tear me apart and I had no answers for him. He didn’t know anything about how his father died until his school years were ending. He grew up with the help of my father, in my father’s home.

Over the years I’ve had to be a father for my son, taking him to the barber for hair cuts and attending school meetings that a father would ordinarily attend. I received many proposals for marriage after my husband died but I wasn’t sure how my son would be treated, or if I would be able to continue to pursue the case of my husband’s death if I remarried, so I refused them.

In 2002 I knocked on the doors of the State Human Rights Commission (SHRC) with my case. I attended all the court hearings. At first I was being accompanied by my father but when his health deteriorated I started attending them alone. Sometimes I had to attend two hearings in a single day. Today I remember all the legal terms and procedures.

It has been a constant fight to maintaining the different aspects of my life, being a homemaker, a young widow and woman who had to venture out in public spheres to pursue the case for justice.

After many hearings and seeing all my proof, the SHRC eventually found that my husband had been killed in army custody. But the army has not cooperated in the case and has failed to present the soldiers responsible despite repeated summons. People like me will only get justice when the AFSPA is removed from Kashmir.

– As told to Rifat Mohidin
– Featured image by Sheikh Firdous
– Rifat Mohidin is doing a special series of stories on women in Kashmir, exploring their realities, their successes and their challenges.