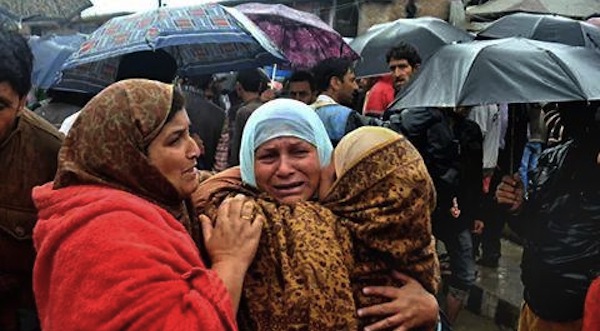 September 7 will mark one year since parts of Pakistan and Indian-administered Kashmir were devastated by floods. A year later and people are still crying for help in the disputed Himalayan region. RIFAT MOHIDIN filed this dispatch from Srinagar.

Sixty-three year oldÂ Naseema Begum says the family has no choice. The walls of their 70-year old mud and brick home in theÂ congested locality of Batamaloo in Srinagar, may be cracked beyond repair, and the fragile floors may tremble every time they move a step, but there is simply no where else to go.

The district of Batamaloo was hit hard by the floods of September 2014. Around 250Â people died in Kashmir and 600,000Â were displacedÂ when the Jhelum River burst its banks and swallowed parts of the city. Hundreds of villages were also submerged in the deluge. It was described as the biggest floods to have hit the region in a 100 years.

Like the Khan family, thousands of people inÂ Kashmir are still living in derelict and make-shift homes, waiting for rehabilitation.

The estimated economic damage stands at $7-billion but a year on, many are feeling helpless due to minimal efforts from the state government to offer meaningful assistance.

Begum says they can’t afford to fix the structure. To dismantle the home, architects have estimated costs as high as 95,000 rupees ($1,400) but the family is not in the situation even to think of rebuilding the house.

â€œMy husband (Ghulam Muhammad Khan, 85) is retired and we have no other source of income. The government initially gave us 3,800 rupees ($56) but we returned that back to them. After a struggle of running to government offices, we were given 12,600 rupees ($188). Even that cannot make a single room.â€

“We are playing with death by living in this house, but we have nowhere to go. The government has failed us in one year; I donâ€™t think they have any plans to help usâ€ says Naseemaâ€™s daughter,Â Guddi.

Some metres away from Khan’s home lives Mokhti Begum. A family of nine -Â Mokhti along with her two sons, daughters-in-law and grandchildren – have been living in one room for the past year.

Begum’s homeÂ collapsed during the floods and in return the family was given a mere 3,800 ($56) rupees compensation from the government.

â€œGovernment officials came to verify, but we were given just 3,800 rupees ($56) which we have returned back to them. We took credit [a loan] from people to dismantle the half-collapsed structure. It cost us one lakh [100, 000 rupees/$1500]; how can we rebuild a home from such a small amount? We are all in trauma.â€ says Gulshan Mokhtiâ€™sÂ daughter-in-law, who has three daughters.

“My husband is an auto driver; the auto was also in the floods. I am not even able to pay the school fee of my daughter for the last ten months. We are running from pillar-to-post for help, but we donâ€™t see any hope in sight.” adds Gulshan.

For many Kashmiri women, who lost a husband or a son during the violence over the past two decades, in which an estimated 60,000 people have died and between 5-10,000 others said to be ‘missing’, the rehabilitation process has been particularly taxing.

For these women, the slow delivery of aid and rehabilitation is part of a larger question of continued injustice in the region.

TakeÂ Hameeda Khan, who lost two sons in the ongoing conflict in Kashmir, the devastation to her home lingers even more so, now that her house has been damaged beyond repair.

My world was lost with them, now the home was left with their memories which [were] washed away by floodsâ€ says Hameeda.

Hameeda’s home was damaged beyond repair during the floods but like so many others, she has yet to receive anyÂ compensation.

â€œI donâ€™t know what to do after this; the floods have given me a big blow. I donâ€™t know how to rebuild everything that I have lost.â€ says Hameeda, who – along with her two daughters and husband – is living in a rented accommodation for the past year.

Still, there are others like Nasreena Begum (60), forced to navigate patriarchal Kashmiri society and the conflict in trying to rebuild her home. Â A widow for three years, Nasreena has been forced toÂ stop rebuilding her home because of a lack of funds.

â€œWhen the construction material reaches my home in the middle of the night – as the movement of these vehicles is banned during the day – they tell me you donâ€™t have any man in the family. They feel pity for me as I have to wait for them on the road at night. Rebuilding home is a long struggle for me,â€ she says.

Nasreena, along with her 25-year-old daughter, is living in rented accommodation for the last year. The family has no major source of income.

â€œ[The] government paid me 175, 000 INRÂ which was spent in removing the rubbles of the house and laying the foundation. Now I am left with nothing but the name of God.” Rifat Mohidin, based in Srinagar, is currently focusing on stories about women in Kashmir, exploring their realities, their successes and their challenges.