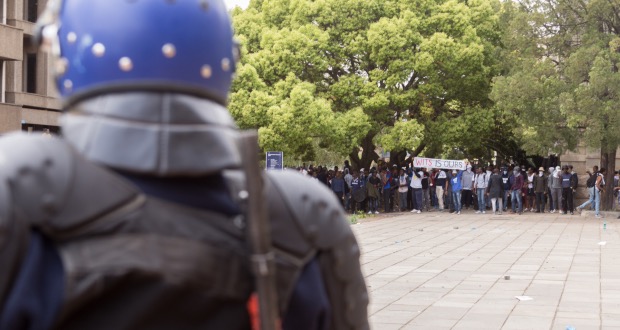 In an open letter to Finance Minister Pravin Gordhan, head of department of anthropology at Wits, Dr Kelly Gillespie, expressed her disappointment that Gordhan hadn’t done more to show his support of the #FeesMustFall protests, saying that his department holds a key card in the conflict.

I wonder if you have any sense of what my colleagues and I went through today at Wits University. In case you donâ€™t, in case you havenâ€™t been made aware through your channels, I thought Iâ€™d write to you directly.

I am head of the Anthropology department in the Faculty of Humanities at Wits. It is my duty to educate university students in the best traditions of critical thinking and to train them to be thoughtful and creative citizens. It is my greatest pleasure to serve this country as a teacher and mentor to young people at university. I consider myself a public servant, and work as hard as I can to fulfill this duty with integrity.

Today I saw one of my students have her eyelid lacerated by a rubber bullet. I saw another have a full-blown panic attack as a consequence of an exploding stun grenade. On Tuesday I tried to comfort a student wailing and gasping from teargas. I held the hand of another being wheeled to hospital weeping uncontrollably after her head was split open by a flying stun grenade canister. Do you have any idea what it is like to be a teacher responsible for the lives and learning of these students and to see such violence brought down upon them, to see them in such devastation? It feels like a seismic betrayal.

I know that you werenâ€™t responsible for calling the police to Wits today. I know that our Senior Executive Team, with very little wisdom, is responsible for that. But I am sure you are aware that at the heart of the student protests is an issue that rests squarely in your office. At the heart of the matter is a very simple process: over the past 20 years, year on year, your department has cut per capita funding to universities, a situation which has forced rising student fees and incremental privatisation of our public universities. So many of our students are struggling to make ends meet. Just today I had a first year student, with three wounds on his body caused from Tuesdayâ€™s rubber bullets, come and ask me for R100 because he has not eaten in two days. A few days ago I had to buy tissue oil and sun cream for another student because she could not afford these items she was told to use after her face was burned by a stun grenade. She wrote to me yesterday: “I got the sunscreen and tissue oil. So hopefully, and with much thanks to you, there won’t be any permanent scarring via the sun on my face. Thank you for your kindness. Your warmth. These are the small and divine mercies that make life a little bit easier.” These are the students who are protesting for free education, who are in the streets because they simply cannot afford privatising university education.

In other words â€“ and let me be quite clear about this â€“ your department is structurally responsible for the violence that I witnessed on campus today, that my colleagues and I must face in dealing with the very real lives and bodies of young people in our institutions. While I am furious with Wits management for its role in the militarisation of campus that exacerbates and flares this conflict, they have no power to change the underlying structural conditions that fuel campus violence. You do.

I know you are under pressure from factions in the ANC, and that you are fighting your own political battles in the party and in government. But Iâ€™m begging you to understand that it is your department that holds the key card in this conflict. I am begging you, from the position of a committed teacher, to take the crisis in higher education more seriously. The only thing that will stop this antagonism at our institutions is the amplification of state funding to universities to keep them public, accessible and providing quality teaching and research. If you donâ€™t want to tax the super-rich, which weâ€™ve been arguing is your political responsibility, then take the money from the defence budget or the unnecessary mega-projects, or the budgets for state pomp and ceremony. How can you not be willing to fund free education? It is not even a radical demand, but one that has been part of the tradition of liberal democracies for generations. We know that Mexico has free education, and Brazil, and Chile, and Germany, and Finland, and that other comparable economies have invested much more heavily in higher education. It is so difficult for us to understand how you could be so unwilling to invest in education, surely one of the most important resources in our young democracy?