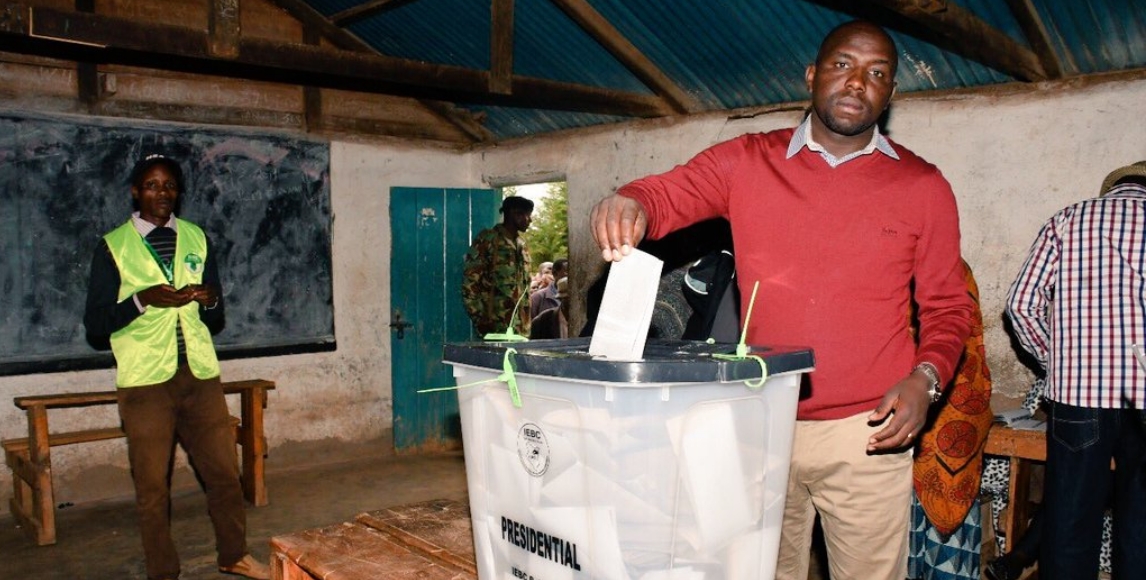 On Thursday, Kenyans headed to the polls for the second time this year. There were reports of political violence in some areas and three people were killed. Some Kenyans were prevented from voting and in some areas voting was extended. The Daily Vox team rounds up what happened in #KenyaDecides 2.0.

Kenyan president, Uhuru Kenyatta has taken a lead in the repeat election which took place yesterday. However, the voting which started on Thursday morning was marred by low voter turnout and several disruptions from protestors as well as delays in the opening of polling stations.

These guys are chilling in one of Kisumu’s main polling stations, making sure no “betrayers” come to vote. If they do: “consequences” pic.twitter.com/pjIviPVTwb

The latest figures out of Kenya put the voter turnout at only 32%, which is considerably lower than the 80% voter turnout which marked the first election, which took place on 8 August.

Incorrect. In Kisumu @IEBCKenya officials&staff told reporters they were unable to open on time. No stations have opened in city. https://t.co/jRPno155Np

The Kenyan Standard reported that the elections revealed different sides of the country. In some parts of the country, especially central Kenya and the Rift Valley, voting took place peacefully despite lower turnout, while in other parts, including the coast and in Western Kenya, voter turnout was low and there was violence. In a few areas, groups of people prevented others from entering the polling station to vote. This prompted Kenyaâ€™s Independent Electoral and Boundaries Commission (IEBC) to postpone voting in those areas until Saturday 28 October.

On Wednesday, the Supreme Court failed to consider a petition by human rights activists to postpone Thursdayâ€™s election as the quorum of judges required for a decision to be made was not reached.

In response to the decision, opposition leader, Raila Odinga and his opposition alliance, the National Super Alliance (Nasa), called for Kenyans to boycott the election. Odinga withdrew from the election because he felt that not enough reforms had taken place to ensure a free and fair process. The low voter turnout may have been a response to his call to boycott the polls.

Kenyatta, who cast his vote in Kiambu on Thursday, said he is open to the possibility of talks with Odinga as a way for Kenya to move forward.

â€œIt will be the responsibility of the one who will win the repeat presidential election to heal and unify the country. Should I win the election, it will be my duty to do that and it is my intention to reach out to him (Raila). Let us first get through this election,â€ said Kenyatta.

Several observers have said Kenyatta made similar statements after the August elections and they did not come to fruition.

Kenyan journalist Jacqueline Kubania has criticised the Western mediaâ€™s take on the elections, saying itâ€™s been written as a single narrative. She has called for a more nuanced look at the elections, separate from the violence and which actually includes why voters stayed at home.

The IEBC is due to give a full report on the elections turnout and results on Friday.