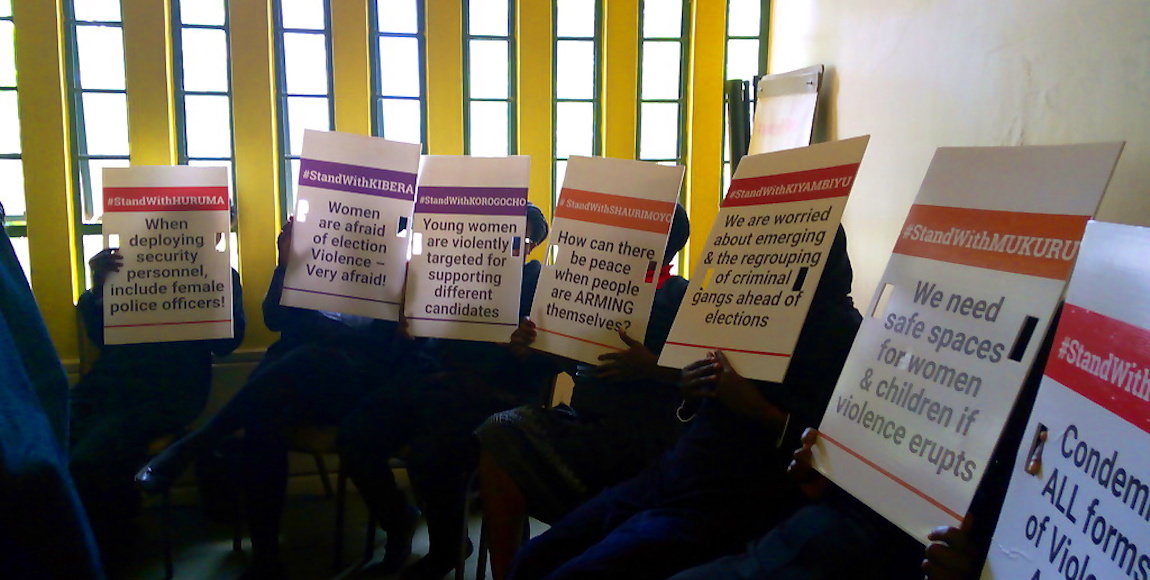 Women peace builders representing more than 10 informal settlements in Nairobi have raised their concerns over the impending violence ahead of the August 8 elections.

On Thursday July 27, a group of 10 women from Kibera, Mathare, Korogocho, Huruma, Kiyambiyu, Shauri Moyo, Kaloleni, Mukuru, Kangemi and sections of Ruaraka and Ngong held a press conference to address their concerns over election violence. These 10 areas have been marked as election violence hotspots by police.

*Alice from Mathare says people have started moving out of their homes for fear of violence.

â€œPeople have been given notices and mothers have been told to move out of structures, especially if they live in structures owned by people from another tribe. Gangs have already formed and are running around threatening others,â€ Alice says.

The threat is so real that the women in the press conference had to hide their faces using placards to avoid exposing their identities to authorities or to the gang members in their respective neighbourhoods.

Threatening leaflets written in Swahili were distributed overnight in Ngong on Saturday saying that members of four communities should leave before or on August 7.

â€œIgnore this warning and you will face the consequence,â€ it read in part.

Messages threatening people deemed to be â€œforeignâ€ to these areas and asking them to move before being forced out also circulated on WhatsApp.

While some people are moving away, others have decided to arm themselves and prepare for any threats that may come their way.

*Mary, from Kibera, says residents are no longer hiding; instead, theyâ€™re arming themselves in order to protect themselves and their loved ones. â€œSome of the weapons come from politicians within the community. We have raised concerns over this but it has never been addressed in any way,â€ she said.

However, most people from the areas face another challenge: the matatu [minibus]Â and bus crews from Machakos Country Bus stage stop them from leaving.

â€œThe matatu crew will take your identity card; send it to the 70000 number provided by Independent Elections and Boundaries Commission (IEBC) to determine where you are casting your vote. If it indicates Nairobi, you will not be allowed to board the bus,â€ said *Susan from Kiyambiyu.

The women say politicians have been plying young people with alcohol and drugs to control and manipulate them.

The National Authority for the Campaign against Alcohol and Drug Abuse (NACADA)
proposed the closure of bars a week before elections but was met with resistance from Kenyans on social media.

â€œIn Huruma, roads called Bondo, that leads to Mathare North, and Othaya are the most notorious for these drugs and political chaos. They should be properly surveilled for the perpetrators to be caught and punished,â€ said *Beatrice.

The women are also pleading with authorities to close all bars and alcohol outlets over the election period to ensure that the youth do not become intoxicated and cause chaos at that time.

No faith in police
The women say a police presence would not make them feel any safer as most of the officers deployed are men. Theyâ€™ve requested more female officers be included in the security forces deployed to the areas.

Kenyan police have been accused of brutality, sexual assault, rape and extrajudicial killings in the past.

What you need to know about extrajudicial killings in Kenya

The women have called for the implementation of the United Nations Security Council Resolution 1325 which protects women and children during crisis, and to which Kenya is a signatory.

The resolution highlights the need to increase the representation of women at all decision-making levels in institutions and in conflict resolution and peace processes, to incorporate gender perspectives into peace operations, and to ensure that the needs of women and girls are considered during crisis situations.

The women further called for the provision of safe houses for women and girls in case of violence, and for emergency healthcare services to be made available by medical and security personnel.

Several NGOs, including the Peace Pen Consortium, the Association of Media Women in Kenya, the Young Womenâ€™s Leadership Institute, Crawn Trust, Fatumaâ€™s Voice and Femnet, have supported the womenâ€™s concerns, saying they should be heeded.

Daisy Amdany, the director of Crawn Trust, who was also at the press conference said: â€œHere we have the concerns of the women from the informal settlements who are calling upon the government to put in place concrete measures. It is important to address the issues of women and the specificity mentioned here be taken into concern.â€