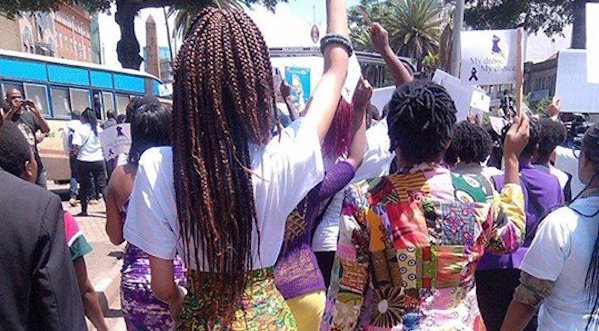 Last week, a video of a Kenyan woman being attacked by a group of men went viral on social media. The footage shows the men yanking and tugging at her clothes until she is naked. The reason they gave? She was dressed in a miniskirt, and they deemed her clothing to be too provocative.

WARNING: THIS VIDEO IS GRAPHIC AND DISTURBING

The policing of women and their bodies is nothing new, but women are getting more tired of this by they day and are now more often standing up against this behaviour. Kenyans organised the My Dress Code My Choice miniskirt march in Nairobi to protest against the harassment of women, based on their clothing choices. Women dressed in miniskirts and men standing in solidarity with them marched through the streets shouting slogans.

One of the protesters, Diana Okello told Al Jazeera said “Women are being assaulted. We especially want to know what the women we chose as leaders are doing.”

In 2012, a similar miniskirt march took place in Johannesburg after two teenagers were harassed by a mob of men at the Noord Taxi Rank. People involved in the incident claimed the young women were harassed because one was wearing a miniskirt and the other’s bra straps were exposed; this they said had provoked and tempted the men.

In October, Zimbabwe held their first miniskirt march. Womenâ€™s rights activist and director of the womenâ€™s rights movement Katswe Sistaho, Talent Jumo, said that men who harass women for wearing miniskirts do it because this particular item of clothing is not part of Zimbabwean culture.

One of the most common questions women are asked after they have been harassed is â€œWhat were you wearing?â€, followed by â€œWhat time was it?â€ and â€œWhat part of the neighbourhood was it?â€

These sorts of questions are irrelevant. They do nothing but perpetuate the misconception that women play a part in their own violation. The questions must stop and so must the harassment.

– Pictures and video courtesy of the My Dress Code My Choice Challenge Facebook Page.