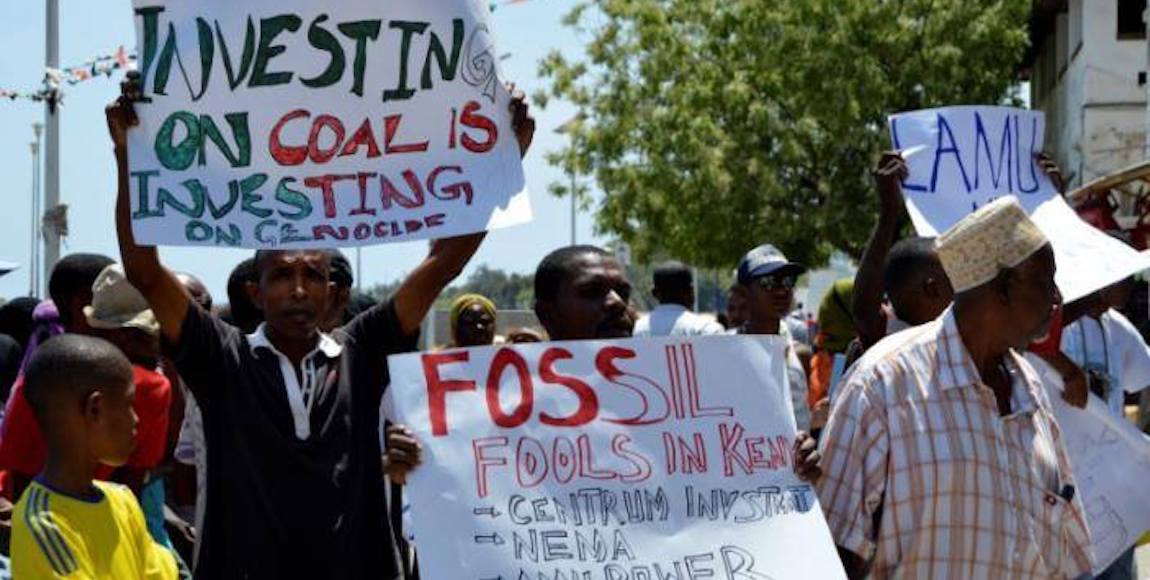 Stemming from the latest conflicts around South Africa’s pending nuclear power expansion programme, said to be one of the largest government tenders in post-Apartheid South Africa, welcome news has arrived from Kenya’sÂ Save Lamu community-based campaign and the deCOALonize movement opposing the development of a 1 050MW coal-fired plant in Lamu.

Lamu is an island archipelago set to the northeast of Mombasa, and is said to be home to one of the original Swahili settlements in the region from as far back as the early 14th century. The territory faced colonial domination from Arab, Portuguese, German and British empires from the early 1500s until the national liberation party declared independence in 1964. The economy of Lamu is largely dependent on tourism and fishing, both of which stand to be adversely affected by the latest moves towards coal-based industrialisation plans. The proposed Lamu Coal Power Station is being financed by AMU Power company (Kenya), Industrial Commercial Bank of China (China), and Standard Bank (South Africa), and the initial sources of coal are set to arrive from South African coal mines.

Furthermore, an article in Kenya’s Daily Nation states that over 1 400 workers are set to be brought in from China for the construction effort. The article goes on to say that, of the 500 permanent jobs created by the plant, 250 will be reserved for Chinese technicians due to a lack of technical capacity within the country.

In chilling echoes of warnings from a previous era, we recall a comment from Kwame Nkrumah on neocolonialism from 1965:

â€œAt first sight the scheme would appear to have many advantages for the developed countries of the world. All the profits of neo-colonialism can be secured if, in any given area, a reasonable proportion of the States have a neo-colonialist system. It is not necessary that they all should have one. Unless small States can combine they must be compelled to sell their primary products at prices dictated by the developed nations and buy their manufactured goods at the prices fixed by them. So long as neo-colonialism can prevent political and economic conditions for optimum development, the developing countries, whether they are under neo-colonialist control or not, will be unable to create a large enough market to support industrialisation. In the same way they will lack the financial strength to force the developed countries to accept their primary products at a fair price.â€

Community activists and supporters across Kenya and internationally have joined forces with organisations and coalitions such as Save Lamu and deCOALonise to bring to the center the many discontents surrounding the development. These range from the prospects of pollution that stands to threaten the marine ecology (and by consequence local fishing), to the land displacement required in Lamu to complete the plant. Village residents will be financially compensated for their displacement but, as several activists argue, they are unlikely to fairly benefit from the development in the long term, as only limited employment options will become available.

The deCOALonize campaign, operating largely off its resource-based website, aims to connect and provide information on advocating for renewable energy substitution of fossil fuel based energy. Many resources on their site highlight the potential for investment in renewable energy technologies such as solar and wind, with the former already beginning to outperform coal in terms of the cost of electricity.

Kenyans, please show up for #deCOALonize at the Supreme Court tomorrow. At stake are our air, our water, our soil, our energy future. pic.twitter.com/b98a5BU0rS

Beyond the fight to meet Kenya’s rising energy demand, renewable energy systems in particular are also well suited to off-grid and microgrid systems, which are able to provide power to regions where the cost of extending the required infrastructure are prohibitive. Sparsely populated areas such as Lamu are prime candidates for such solutions, which offer far less of an environmental cost in the pursuit of power.

What is significant about the challenges arising from this crisis is the way in which the resistance to the Lamu coal power station opens up conversations on the differing legacies of the national independence phase of the last wave of decolonisation, particularly as it relates to industrialisation. In fact, Nkrumah’s own central electrification project, the Akosombo Dam, leaned on the American multinational Kaiser Alumininum and sizeable loans from the World Bank to get off the ground. It is perhaps the challenges, opportunities and failures presented by that project that make his words of warning so harrowing for the prospects of our present day challenges.

As South Africans, and in challenge to the exceptionalism forged and encouraged by our European settler regimes of the past, the story of the Lamu coal power station should raise serious questions about the extent to which South African capitalists have been let loose to play a sub-imperialist role on the African continent. More importantly, we need to ask who and what are the appropriate agents and means through which we can not only curb that behaviour, but ultimately connect the fundamental needs of the exploited across contexts that go beyond national affiliation.

As calls for more African-centered content in universities and schools begins to crystallise in bureaucracies across South Africa, we must continue to push ourselves harder to enact Pan-Africanism as a verb; not only to learn but to engage in dialogues where mutual learning can happen. Are our only options coal and nuclear plants built by Russia and China, or high-tech solar and wind farms built by the USA, Europe, and China? What other possibilities exist and how do they connect with calls for wider social transformation, self-determination and community control of our resources? These are the questions we must continue to ask but also begin to answer before it is too late.