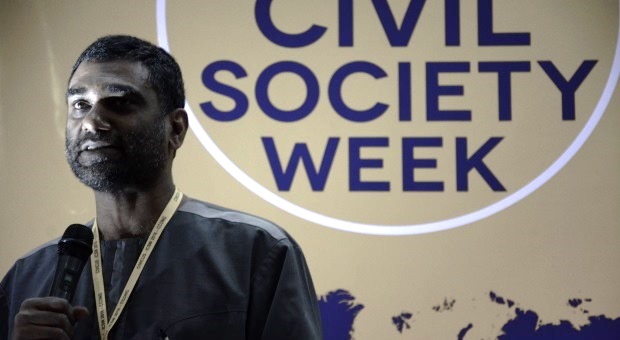 At International Civil Society Week in Bogota, Colombia, various organisations and individuals have come together to discuss some of the biggest challenges to peopleâ€™s rights and to civil society. Former head of Greenpeace and human rights activist, KUMI NAIDOO, is also there, and he spoke to The Daily Vox about five of the biggest challenges that are facing Africa today.

1. Climate change
Not in order of priority, the first challenges I would highlight is climate change and the impacts of climate change that we are already facing on the continent. We are seeing desperate levels of climate-induced desertification, climate-induced drought as well as, occasionally, climate-induced flooding and extreme weather events. It is a terrible injustice for Africa, because Africa as a continent has been least responsible for the problem of carbon pollution and emissions. But as the climate science says we are the continent, in terms of a large number of people who are going to face the worst impact of climate change. Just to say that there are small passive island states, such as Kiribati and Manawatu and so on who are already feeling the impact of sea level rise. But when we talk about a big region, Africa is the region where we are already losing lives, weâ€™re losing livelihoods, weâ€™re losing agriculture and so on.

The challenge for Africa is how do we actually turn the crisis of climate change into an opportunity by moving rapidly forward to make the transition from a dependency on dirty energy to clean energy. Given that we are blessed with probably the best solar potential, significant wind potential as well as wave potential because weâ€™re a continent surrounded by oceans.

2. Corruption
I as an African resist the Western portrayal of African corruption as if Africans have a monopoly on corruption. For me, one of the most corrupt things that have happened in the last 15 years was the lies that were used for an illegal war in Iraq by and when thousands and thousands of civilians were not involved, were killed and were just dismissed by countries like the United States and Britain as collateral damage. If you look at who benefitted from that war it was very much the allies of George W Bush. If you look at who got him elected, that election was bought for him lock, stock and barrel by the oil, coal and gas industry. History will show that the allies in those industries made a killing in terms of wealth accumulation. But the bottom line is that we do have a huge corruption problem on our continent.

I believe that too many of our political and business leaders are suffering from a medical condition which I call affluenza. They have forgotten, they speak about poverty, they speak about the concerns but they chose the most extreme levels of affluent lifestyles, which means that they actually cannot really empathise and understand the tragedy of poverty that people face. So we have to resist the idea that people can act, not just be corrupt, but engage in acts of corruption with so much of impunity. The fact President Zuma, for example, is resisting and was resisting paying back the money, you know letâ€™s say even if the rules allowed him to take so much money to build his house. How can you justify that in a country where so many of our people donâ€™t have a basic roof over their head, donâ€™t have water, donâ€™t have sanitation? So corruption I would say is something that Africans, citizens now stand up and say to our leaders, “enough is enough and no more”. If you engage in corruption weâ€™re going to make sure that you end up in jail, not simply that you lose power.

3. PovertyÂ
Poverty is endemic and poverty manifests itself in multiple ways with educational deprivation, with health services being absent, people not having housing and water and sanitation access. When you combine this with the issue of water and climate change, we know that if we donâ€™t start thinking about water harvesting and so on we are going to have a much, much worse situation in the coming months, years ahead.

4. Inequality
The other problem we have is with inequality. You can take poverty and inequality together, because thereâ€™s nobody you can find in the world that will say, “I think poverty is a good thing”. Even though some people think poverty is a good thing, particularly big business because it means that you can have cheap labour… not only big business but also medium-sized businesses and small businesses. But nobody really stands up and says, “oh I support poverty”. But thereâ€™s no point of you saying, “oh Iâ€™m against poverty”, and youâ€™re not willing to actually address the indefensible levels of inequality that actually exist on our continent. I mean the 20 richest Africans on the continent own more than 60% of ordinary African citizens.

But when we talk about inequality we also need to recognise – and I could pull this out as a sixth challenge – gender equality is a very major problem. Because if you lookÂ at agriculture on the continent, who are the main people that are doing agriculture on the continent? The majority of the food grown on our continent is actually grown by women, but they do not have access to seeds, to land and the kind of support that they need to actually be able to prosper and survive. So we have to break the acceptance that itâ€™s okay to have these huge levels of inequality because inequality is what actually contributes to poverty and the notion that, “oh we need some wealthy people because they will have business and theyâ€™ll create jobs and wealth will trickle down”. Thatâ€™s just not happening on the scale that it needs to and itâ€™s a lie.

5. A shrinking democratic space
While the African Union has made some very good resolutions about how important democracy and good governance is and so on, letâ€™s be blunt about it – they are in fact nice resolutions which are not being implemented. We are seeing activists being killed, laws being passed to restrict what civil society can engage in, we are seeing fraudulent elections, we are seeing constitutions being changed so that a particular leader can serve longer and so on. This is a betrayal of the promise of the fact that we as a continent are going to build a meaningful democracy that listens to the interests of ordinary people.