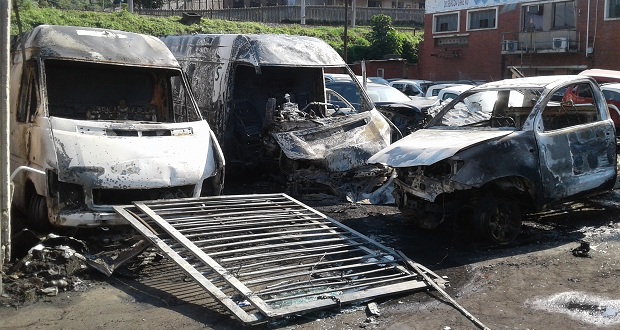 Early on Monday morning, hundreds of people took to the streets of Durban near the N2, Queen Nandi drive and Springfield. They were protesting against the ward candidates list for the upcoming municipal elections. Residents blocked off roads, threw rocks at cars and burnt vehicles. DANA DA SILVA and KWAZI DLAMINI round up.Â

Residents from KwaMashu, Springfield and Sea Cow Lake started protesting in the early hours of Monday morning. They marched from Parlock to the Connaught bridge, damaging property on the way. Most businesses and factories were forced to close due toÂ the protest. They took to the streets because they are unhappy with the ANC ward candidatesâ€™ lists for the upcoming elections. KwaMashu residents claimed that their nominated candidate was not on the featured list.

They want to see change in their communities, â€œWe just want to choose the best candidates to lead us; we donâ€™t want people who are only in the race to enrich themselves and their friends,â€ Â unemployed Sea Cow Lake resident Sandile Magatyane (29) told The Daily Vox.

Magatyane said that residents had decided to take to the streets because they believed that it was the only way that they could be heard, as previous attempts at discussions had failed. â€œPeople have been killed in shacks fire every year here and we cannot tolerate another selfish leader; we need proper houses,â€ he said.

The protests took place in various parts of Durban, on North Coast, Umgeni and Springfield Roads, Queen Nandi Drive and the Sea Cow Lake area. Residents blocked off the roads with rocks and burning tyres and burnt cars and trucks. There were also reports that a man was shot in the stomach by a group of protesters near North Coast Road. A resident of Springfield, Norman Guqa (35), who has been living in a shack for nine years says that his community has been forgotten. Guqa said that something has to change, â€œand now it will change by force because we never meet our councillor and the current list has names of people we donâ€™t recognise,â€ he said. He added that until they get answers they will close down the area and wonâ€™t let any cars go in and out of Springfield.

â€œViolence is the only language these politicians understand. You cannot reason with a politician, he will use big English words just to confuse you and come up with excuses but we are tired now,â€ said Guqa.

Most of the businesses in the area were affected as residents were throwing stones through windows and damaging property. â€œThey did not take anything, they just broke the glasses in front and few items that were inside were damaged,â€ said Melusi Mkhize, a security guard at a Sanware store. On Monday, KwaZulu-Natal party spokesman Mdumiseni NtuliÂ confirmed thatÂ that the protests were over the ANCâ€™s controversial list process. There has been infighting within the ANC in eThekwini as disgruntled councillors are contesting the August 3 local government election as independent candidates. Along with deploying police, the eThekwini municipality sent out a public notice urging people to stay away from these areas.

#UrgentPublicNotice: Some of our roads are blocked by protesters. Please be cautious on the roads this morning. pic.twitter.com/afxNtNBMir

According to Northglen News,Â residents returned on Tuesday morning and began stoning vehicles and burning tyres, but they were later dispersed by the police. Â The M19 was then reopened but emergency services and police are urging residents to be cautious when driving on the roads.