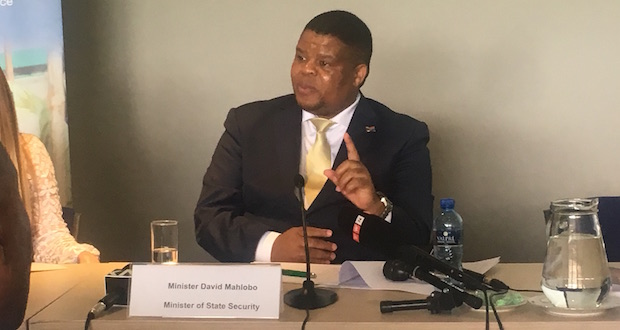 In October this year, President Zuma announced that an inter-ministerial task team,Â including members of the Security Cluster, would be set up to deal with the #FeesMustFall protests. On Monday, the Institute for Security Studies held (ISS) held a panel discussion on whether state intelligence can help to prevent violent protest. The panelists were the Minister of State Security, David Mahlobo, author of Protest Nation: the Right to Protest in South Africa, Professor Jane Duncan, and the regional coordinator of Right2Protest, Mbalenhle Matandela.Â

Duncanâ€™s presentation reiterated, as she hasÂ previously told The Daily Vox, that the increased use of security measures tended to increase resorts to violence from protesters. However her main concern was that there was insufficient accountability on behalf of the the State Security Agency (SSA) which made it unreliable in ensuring peopleâ€™s rights were protected when surveilled.

Duncan said the lack of accountability could be seen in the deficiencies of the Regulation of Interception of Communications and provision of communicationâ€‘related information Act (Rica) – through its inability to protectÂ peopleâ€™s rights to security and privacy. She called for a â€œuser notificationâ€ system which informs individuals, within a set period, when their communications have been intercepted – unless there are compelling reasons (such as criminal activity) for the user not be informed.

Jane Duncan of UJ speaks to danger of intelligence not being made accessible and how that affects accountability. #ISS pic.twitter.com/Km2jJjhbvB

As a local example, Duncan cited the violation of Rica when, in 2011, two Sunday Times journalists had their phones tapped by the Hawks while they were investigating matters relating to President Zuma and other government officials. Since then, there have been campaigns demanding the reform of RicaÂ to better protect individuals from unwarranted government surveillance.

Matandelaâ€™s presentation also focused on issues of accountability, stating that it seemed the only means of accountability the state was relying on were the courts, which prosecuted students for protest-related activities – criminal and otherwise – but then denied bail or delayed the court cases of students being detained. She argued that this was to be seen as a political means of stifling the right protest, as opposed to holding criminal acts to account.

Matandela raised the concern that state intelligence might be used to inform the stateâ€™s politically motivated tactics, as opposed to investigating criminal activity.

â€œDelving into the privacy of protesters in ways that are unaccountable, unseen and already assume that they are criminal, undermines the sense of security for protesters. Should they decide to engage in democratic process, being harassed or a target for interception often leads to a paranoia – this along with the PTSD [post-traumatic stress disorder] caused by increased securitisation of campuses can effectively demobilise entire movements,â€ said Matandela.

Minister Mahlobo responded to the two panelists, claiming that both Duncan and Matandelaâ€™s definition of the SSAâ€™s mandate was very narrow, as it was also the SSA’s duty to protect the stateâ€™s interests. This includes protecting institutions and infrastructure that were often the target of protests. He highlighted that certain political bodies, in vying to push forward their political ideals, sometimes resorted to strategies and tactics that could destabilise the country – and that this meant that intelligence on such matters was required.

â€œIf there are wrong things that are done, should the state not be in the position to secure the rights of others?â€ asked Mahlobo.

On the issues of accountability, Mahlobo admitted that there might be real issues that needed to be looked at, but that he and his ministry were willing to engage in discussion and accept suggestions for improvement. He warned though, that the impression should not be entertained that no means of accountability were currently present.

The matter of his alleged involvement in facilitating and profiting from rhino poaching Â was also brought up.

The panel discussion ended with Mahlobo responding to concerns over distrust of state institutions, given the Public Protectorâ€™s State of Capture report and allegations from Fees Must Fall leader, Mcebo Dlamini, that his arrest was politically motivated. The minister said that such allegations of his own involvement were unfounded and unfair, but that he would be open to investigation to all matters relating to his conduct and allegations of illegal activity.

Minister Mahbolo says he is not responsible for the arrest of Mcebo Dlamini, says Dlamini has been even visited his house many times #ISS pic.twitter.com/mv7bbwxee8