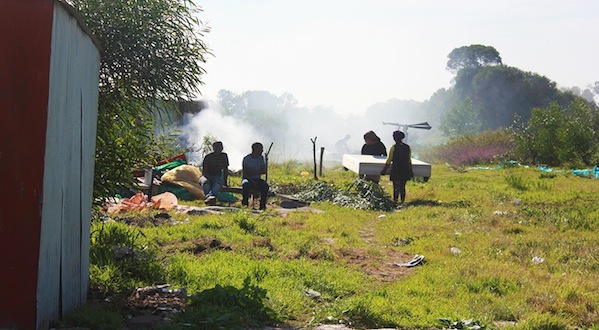 Over the past week, scores of informal settlers from around Cape Town moved to occupy areas of land near the Marikana Land Occupation in Philippi.

Like most townships in Cape Town, Philippi is locked on the outskirts of the city centre. Access to employment and housing is limited, but with the hum of traffic, the blare of African beats, and the murmur of informal trading, life in Philippi drones on. The landless are among South Africaâ€™s most powerless people, and in Philippi, they are mobilising en masse to grab land despite the consequences.

The Marikana settlement was built last year, under the leadership of the shackdwellersâ€™ movementÂ Abahlali baseMjondolo.Â It was torn down after several violent and illegal evictions, and a court interdict now prevents further unlawful land occupation.

As I crossed into the new settlement from the original Marikana, it was nearly impossible to tell where one patch of land ended and the other began. All around me, people poured into the settlement with trolleys filled with building materials. Hammers clanged against iron sheets, while women, men and children armed themselves with spades, digging into the soil to take ownership of the land. â€œIsnâ€™t it nice? Iâ€™m so happy. I dream good now,â€ Tumi Ramahlele, a community leader and former resident of the old Marikana Land Occupation, told me as we stood on a hill overlooking the sea of shacks rising beneath the mountain.

Ramahlele said many meetings had been held to organise the mass mobilisation in Philippi over the past few months. He calls the settlement the â€œfirstborn child of Marikanaâ€, and claims that this is the answer to the cityâ€™s housing crisis.

But are occupiers aware of the tug-of-war they are entering? It is a potential combat between the City and informal organisers like Ramahlele, where the scramble for land often leads to the victimisation of masses of people.

The Prevention of Illegal Eviction from and Unlawful Occupation of Land Act (Pie Act) protects unlawful land occupiers from the brutal and often illegal evictions that have marred South Africaâ€™s democracy.

Just a few months ago, I witnessed one such eviction in Lwandle, watching as police rained rubber bullets on a crowd filled with children. It was horrifying, and it has already happened in this Marikana Land Occupation 2.0. I spoke to a mother of two who moved onto the landÂ on Tuesday. The cost of rent in her building in Philippi was too high, she said. So she left her home with water, electricity and ablution services for a land of nothingness, even though the risk of violent evictions was high.

This is the desperation that drives people to occupy land, even when they live in formal housing. For many South Africans, Â homes are simply not affordable.

But unlawful land occupation is not a permanent solution to their troubles. Landowners can obtain court orders to evict people, or court interdicts to prevent occupiers from building shacks on land. What happens when that day comes?

Since the ruling inÂ Blue Moonlight Properties v Occupiers of Saratoga Avenue, the City is obliged by lawÂ to provide alternative accommodation in theÂ event of an eviction, but often this does not happen â€“ as is the case with the previous Marikana removals and the Lwandle evictions.

In the end, people are often tossed aside and made homeless once again.

Meanwhile, the battle between the City and informal groups, like the one leading Marikana II, rages on. As they tussle, who will protect the people left in the cold?