Home Features “The last ones are woke” – the keynote address at the launch...
WhatsApp
Facebook
Twitter
Email
Print 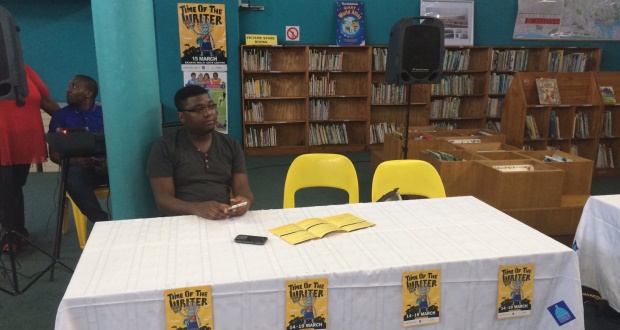 This is the transcript of the opening address given by author THANDO MGQOLOZANA at the opening of The Time of the Writer festival on Monday evening.

You will be aware that this festival has had many wonderful keynote speakers and unluckily for you, tonight you are stuck with me.

Last year, while standing here as one of the guests, given three minutes to introduce myself, instead of telling you what a great writer I am, I abused the platform. I told you I was quitting the colonial literary fraternity. It was the same week, unbeknownst to me, that the Rhodes Must Fall movement was being formed in Cape Town. I called for the decolonisation of the literary system, and naturally when I returned to my place of employment I became a Rhodes Must Fallist.

Since then I have seen many things falling and our relationship with stun grenades evolving in interesting ways:

â€¢ When the first stun grenade was thrown at us, we ran. We fucking ran.

â€¢ Third stun grenade: We said, “letâ€™s throw something back.”

Later in the year, Tiny Mungwe approached me and proposed that we co-curate the next edition of Time of the Writer. I did not hesitate. We immediately agreed on two things:

1. The festival is leaving the elitism of campus, hopefully for good, and is going to the people; and

2. The theme will be Decolonising the Book.

Many people struggle to understand the concept of decolonisation, and you can expect this to be the case when for decades our language has been that of reconciliation. Frantz Fanon found a useful definition in the Gospel According to Mathew, The Parable of the Vineyard Workers, in which it is said: The first shall be last, and the last first.

This is so because in the first place, the function of colonisation is to put the natives LAST.

In our specific instance, there are clear examples in which black people come last:

â€¢ The vast amount of literature produced in this country is written in English; our languages come LAST;
â€¢ Bookstores are everywhere but where black people reside;
â€¢ Libraries are filled with everything but the work of black writers;
â€¢ Until a few months ago, there was little to no mainstream literary activity by black writers for black readers in communities currently occupied by black people.

I am ashamed to admit, but over the last seven years since I published my first book we have been begging to be integrated more comfortably into coloniality. We have been saying:

Now the LAST ONES ARE WOKE.

They are saying, all the things we have tried are not concerned with undoing colonisation, and if they are not then they are merely tools with which colonisation is maintained in our times. It took us long enough but we have finally come to the logical conclusion: decolonisation.

Decolonisation is an act of self-love. We wouldnâ€™t be loving ourselves enough if we didnâ€™t get up and mount project decolonise.

Decolonisation is an act of healing.Â Otherwise we remain the wounded.

Decolonisation is an absolute necessity.

This week when we go to Umlazi, kwaMashu, and Inanda, we will be consciously putting ourselves FIRST. If we donâ€™t, whatever other action or inaction from our side is nothing but a form of participation in the process of keeping us as the LAST ones.

This is the FIRST of many steps that we will be taking to realise decolonisation.

We will have to teach ourselves new ways of being that are not framed by notions of coloniality.

It will not be easy. Coloniality will fight back.

It will not be easy. We will need to unlearn and unbelieve all that coloniality has taught us about ourselves.

Personally, I would rather be reading, writing, or thinking about it; but I find myself having become what Chinua Achebe might have called a reluctant politician of literature. It is a dangerous thing, but it is a choice that I have made, and I intend to work until the LAST ONES come first.