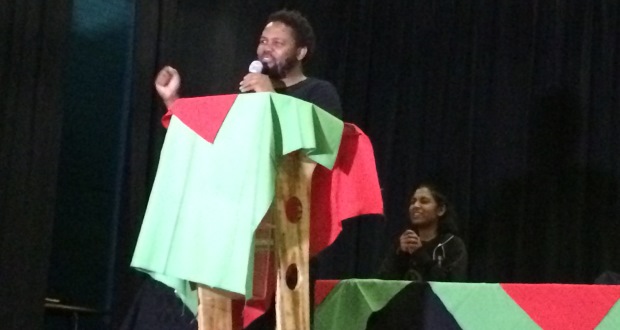 Bongani Sibeko, 23, law student
I wholeheartedly support the movement because itâ€™s the only black movement in post-apartheid South Africa which seeks to address societal issues affecting black people. Particularly the black poor marginalised ones who are still landless and voiceless who have been dispossessed of their land. The issue of land is very important; we mustnâ€™t take it lightly. As black people in this country, particularly young ones, we must address the legacy of apartheid that is haunting us, and judging by what is happening, it is still going to haunt us. Weâ€™re not going to deal with this legacy of apartheid unless we deal with the questions of land. Even the media is playing a critical role in ensuring that theyâ€™re brainwashing us black people not to believe in black only organisations. Iâ€™m appealing to theÂ majority of black people, especially young ones, to join this revolutionary movement to address the issues that are happening. Noxolo Sithole, 17, media student
I attended this launch to observe as a media student and to see what makes this organisation different from the others. Theyâ€™ve got a similar mentality as the EFF, including their way of reasoning. They think alike. I wouldnâ€™t vote for them if they ran for elections because none of what they said made sense to me. This guy comes from the EFF and they have been doing a lot of talking and theories but weâ€™re not seeing any changes. Thereâ€™s this obsession with race – every time they open their mouth, they talk about racism but nothing about a solution. I want to see change and solutions. Vuyolwethu Mqaba, 26, public management student
The movement is a black socialist movement and this is why it has my support. It actually seeks to see black people liberated and I find it to pretty much genuine; this pursuit of liberation of the black person. This movement has clarified what the problem is in South Africa, which is white capital. This movement prioritises black people and their land. Itâ€™s a Sankarist-orientated movement that also leans on black consciousness and pan-Africanism. Itâ€™s possible for them to deliver on the things mentioned in their agenda; it can be done with time. Ntebaleng Makgalemela, 34, segment bank manager
I came to the launch out of curiosity. Iâ€™m inspired by the movement and particularly happy with it because itâ€™s a feminist movement and Iâ€™m a feminist. It was a first time I hear a movement emphasises feminism so much. Their focus on education and black consciousness is appealing. Theyâ€™re brave enough to fight white supremacy, which is a big challenge to South Africa. Iâ€™m hoping that they will be able to educate the masses and expose the real truth about what is happening to black people. It will be difficult to deliver on everything they promise because itâ€™s still a young movement and South Africa is a big country with a huge diversity so there might be some challenges. If they can deliver on the education and feminism portion, Iâ€™d be very happy. I wish them luck.|