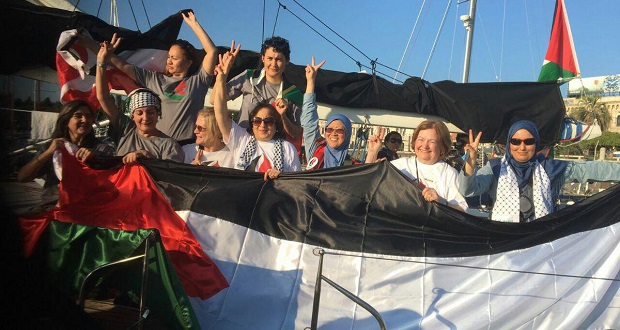 After a night of flying to Dubai and a midday flight from there to Rome, I started feeling excited to be making my way finally to Messina, where I hope to join the boat Zaytouna, which means â€œoliveâ€ in Arabic. I felt like I was already closer to Palestine because I was hearing Arabic translations on the Etihad Airline. The second boat, which I was meant to sail on, is the Amal (â€œhopeâ€); it was not able to sail because of engine difficulties. Who knows if it was sabotage or not, but it was disappointing to hear that it did not make it out of the harbour in Spain. Now the 30 women who planned to sail together on two boats will be reduced to 13 women on 1 boat. I hope I am still able to sail to Gaza but I will only know in a day or so. So many people, who are supporting this mission behind the scenes, are now working harder to try and secure another boat in just a few days. The collective spirit of this solidarity mission is amazing, even if at times the odds seem insurmountable; I imagine it is, as with any solidarity work, difficult.

Today I will move out of the transit zones of planes and airports into the Schengen territory entering through Italy. Once my passport is stamped and I am in, it will all feel more real and possible. My entry into Rome is seamless. I have wondered for months whether Israel is so powerful that they can stop me before I even make it to the boat. I am relieved to realise that it is not all-powerful or maybe not as interested, or maybe not as well informed, as I imagined. Taking off from Rome we head out over the Mediterranean Sea. This is what will take us to Gaza if all goes well. It looks calm and beautiful with no indication of the many thousands who have lost their lives trying to get across it and into Europe. Once I land in Palermo, I will take a bus to the main railway station and then a 3 hour train ride to Messina. If my tenses are all messed up, itâ€™s because I write some of this at different times. I am writing part of this on the plane between Rome and Palermo, which is about an 80 minute flight.

At Palermo I am the last person waiting for checked baggage. Could it be that not returning with what I packed to not bring back, will go missing because of international air travel? I feel much less aggrieved than I usually would when it seems that my luggage may be missing. It feels refreshing. Maybe I should always pack and go as if I may not come back. While there are so many people back home and around the world, and especially in occupied Gaza, who have very little to worry about losing, I would love to care even less about losing material things. I think I am already pretty aware of the trap of materialism, yet I realise that in many ways I have a lot to learn from people who live with much less than I do. This makes me remember Neville Alexanderâ€™s question and challenge to us all before he passed a few years ago: What is enough to live with? What might a theory of sufficiency be? So much of change and development thinking and work is geared towards uplifting people towards middle class-ness, towards the haves. This call is to look towards the have nots and learn from that position what is necessary for a good life. As Frantz Fanon wrote, decolonisation is about putting the last first, when imagining change.

The Palestinians in Gaza have managed to live with nothing and live with knowing that they may not return from doing the most mundane things like going to school. I have read that four children have been summarily executed at checkpoints in the occupied West Bank over the past week by Israeli soldiers claiming that they were going to be attacked by them. There is very little recourse under conditions of occupation to prove these claims to be true or false. It reminds me of US police officers who are not only heavily armed but also antagonistic to their own black citizens, and thatâ€™s without an occupation. In the US right now, a supposed model democracy for many, police kill unarmed black Americans at an alarming rate with tons of audio and video evidence to show their mistakes and yet still no one is held to account. Maybe it has nothing to do with evidence at all.

Certain people, black and brown people, across the world leave home daily, at some level knowing that for them, coming home is less likely than for others. Who in South Africa leaves home highly likely not to return safely? Who gets their stuff taken most often?

I am taken by the person behind the lost luggage desk to a back room where the customs officials have removed my bag to be double-checked. I am relieved that I will at least have the old underwear and chosen unwanted things to lose on this mission. I now have to get to the main railway station, which is an hourâ€™s bus ride away so that I can catch the last train to Messina, which leaves around 8pm. On the bus I am pleasantly surprised to have free Wi-Fi for the trip and so am able to catch up on news from home. Fellow Wits [University of the Witwatersrand] students have marched on COSATU, the biggest federation of unions, which is still part of the ruling alliance with the ANC.

Students want to involve their mothers and fathers in the struggle for free decolonised education, but the students leading the marching from Wits are also aligned to the ANC ruling party. I wish I was closer to understand the reasoning and argument behind this and other decisions. Letâ€™s see what COSATU says. Will it join the chorus and put its weight behind certain factions of the ANC? The call from students for direct action and no more talking, will put a different kind of pressure on everyone. NUMSA, another big union, has broken away/been expelled from COSATU. It too has put out a statement supporting the call for free decolonised education. The political football that is free education is getting some good kicks this week. I will watch as much as I can from afar.

Before the train to Messina departs, I have to do the things that need to be done monthly by people who have the anatomical parts to do so. Railway station toilets are not safe spaces for people in South Africa. I remind myself I am in Europe so follow the signs for the â€œWCâ€. Itâ€™s Friday night around 8pm, and I decide it is likely easier and safer to use the toilet at the station than on the train. I am following the signs. But why is the toilet around the corner in the dark alley? Who plans these things anyway? It should be fine. As I turn the last corner there are two men who are clearly a bit drunk at the toilet entrance. I swing around without a second thought and head back to platform 5. Public toilets are clearly a bit of a hazard everywhere and women have to be vigilant at night in most places.

It has been a long day of travelling and the final 3 hour train trip seems to take forever. I arrive at Messina station around midnight and am met by two members of the South African team who have been working to arrange everything for me. We take a cab together to the hotel, have a bowl of pasta and I crawl into bed exhausted. Tomorrow is an early start and I will begin preparing for the hardest and most important part of my journey.