Home Debate Let’s get to work. Now is the time for democratic renewal and...
WhatsApp
Facebook
Twitter
Email
Print 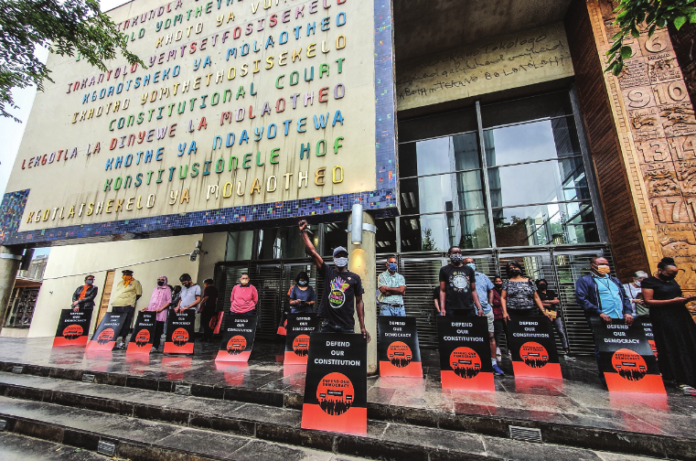 This is a paper written by Shaeera Kalla and Shafee Verachia. It was presented at the Defend Our Democracy Campaign’s Launch of the Conference Paper on Democratic Renewal and Change – 7 April 2022.

Comrades, Democracy is under attack like never before in my lifetime.

Democracy is under attack like never before in the democratic dispensation of our country.

Throughout South Africa evil questions are being asked about who belongs, people are living in fear, so called vigilantes are running gun in hand threatening the very social fabric of our society.

Throughout the world, our climate is going haywire, as the deadly side of development and industrial progress can no longer be ignored.

And when we see boats of refugees crossing treacherous waters in the mediterranean we must realise that this earth is that boat – if some of us are drowning we are all drowning.

Never before in my life have the dangers to contemplate what lies beyond the horizon been too ghastly to imagine, too horrible to visualise and too heinous to give thought to.

Throughout the world we have seen malicious propaganda and ubiquitous fake news being used for evil intentions.

The power of those to divide is forceful and appears all-conquering.

The temptation to blame those who are different whether by race, gender, ethnicity, sexuality or nationality is the easiest and nastiest tool used to divide us.

We are living in a time of indeterminacy and democracy is one of the things we dare not fail to protect.

Like particles in a quantum field multiple possibilities for the future pop in and out of focus.

But the hope in these possibilities of our imagination depend on protecting and refining our democracy.

This task requires us to create a sense of collective ownership in democracy amongst those who have been violently displaced to the edges.

What did freedom bring to Michael Komape and Uyinene Mrwetyana?

What did freedom bring to evicted student Mlungisi Manyanya thrown on the streets because NSFAS was late on their payments?

What did freedom bring to the hundreds of families evicted by landlords during the pandemic despite what the law or constitution said?

Comrades, as we chart a new way forward for our democracy we must see with our eyes the failures of our democratic era.

We must hear with our ears the cries of our elders and the disabled being sprayed with water cannons as they stood in lines to access their grants.

Democracy will only survive if we make it accessible and beneficial to all, if we re establish trust in our democratic institutions.

Democracy will be protected by all when it protects Mama Esther Mahlangu.

Democracy will not be protected by all when activists, auditors and whistle-blowers are gunned down in our streets.

Democracy will not be protected by all when children are unperturbed by the sound of gunshots and gang fights because safety is a privilege.

Democracy will not be protected when air pollution from coal causes more than 10 000 premature deaths a year.

Democracy will not be protected when pregnant women are sleeping on the floor at the Rahima Moosa hospital.

Democracy will not be protected by a political elite who cuts spending on education and health but pumps more money into policing.

However in this moment of doom, when the dangers are overwhelming, our resolve tested,

We are able to do this because our collective virtue is greater than our individual vices,

Our collective resilience is greater than our individual despondency,

And our collective desire for a more just and prosperous democracy, economy, country, continent, and world will not give in to those actively agitating for its failure.

Every single one of us, wherever we find ourselves, must be curiously engaged in what kind of society we want, how we will get there and what the role of the state must be.

We need democracy and we need more than democracy – because it has become abundantly clear that the handrails are off, the architecture of a system once trusted to take us forward was only designed to take a few forward.

Now we must come together to taste the pleasures of a shared rage against injustice and to build a different world.

So let us get to work.