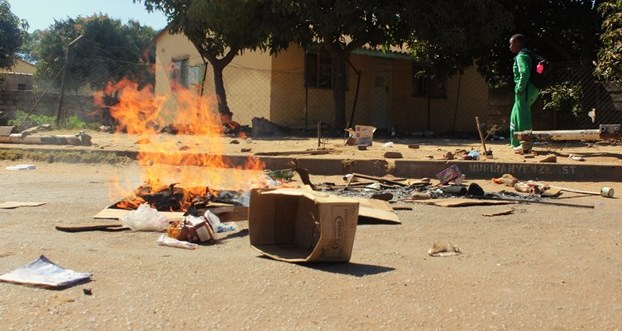 If there’s one picture I wish I could have taken of Zimbabwe’s national stayaway protest yesterday, it’s the police playing pool at the local shops in Budiriro, a high-density suburb in the eastern part of the capital. After two vendorsâ€™ stalls had been burnt to a cinder and big black tyres lit in the streets during a fracas with protesters in the neighbourhood, uniformed officers were shooting coloured balls on a red-rimmed green table. We asked, but they wouldn’t allow the press to take pictures of police while relaxing. â€œOnly when we’re in action,â€ they said. And when Zimbabwean police are â€œin actionâ€ during protests, that can mean going house to house arresting civilians as they were accused of doing in Budiriro yesterday. It can mean beating someone so hard their arm is badly bruised like one bloodied man I saw going to file an incident report and then seek medical help. Surrounded by his relatives and their local (opposition) MP who’d ferried them to the station in his car, I felt conflicted as I watched them walk in. A big part of me wanted to be the invasive idiot reporter who’d have run up to the man, snapped his pic and asked why the hell he was going to the police when they’re the ones who allegedly brutalised him, but I couldn’t, it would’ve so been wrong. But God knows I sure wanted to.

As I went around the rest of the day, the city seemed a bit calmer than the morning. The police were â€œin actionâ€ arresting suspected trouble causers in Mufakose, including three local journalists for taking pictures of a truckful of officers in riot gear apparently harassing civilians in the capital’s eastern suburb. They were â€œin actionâ€, but they reportedly demanded the pictures be deleted. Thankfully they were released hours later, but incidents like these show why there’s such a bitter rift between the people and the police. We cannot be one if the police continue to put fear into the people to scare them into silence. But thankfully right now Zimbabwe is in a surreal space. People are re-amplifying their voice after many quiet years, and speak they must, for as long as they can. I was skeptical about Wednesdayâ€™s stayaway thinking in some towns, people might not go through with it, especially in Bulawayo (my hometown, where nothing ever happens â€“ so we joke) â€“ but they did and I’m quite keen to see how far this goes. The civil servants say they’ll continue and strike till the 14th of July and the rumour mill says activists are calling for people to stay away again until the 10th. Other rumours say next week it’s on, but President Mugabe’s regime says â€œwe got thisâ€. They claim the economy and the protests are momentary problems under control. Let’s see who wins out in the end as the economy quietly slips into recession.

From the spectator’s ringside seat I say, here’s to all the twists and turns, the tears, struggles and triumphs. And even if it all goes bang and fizzles out, at least we’ll mark our place in our country’s history and know that one sunny day in July, the people of Zimbabwe stood up and said, â€œenoughâ€.