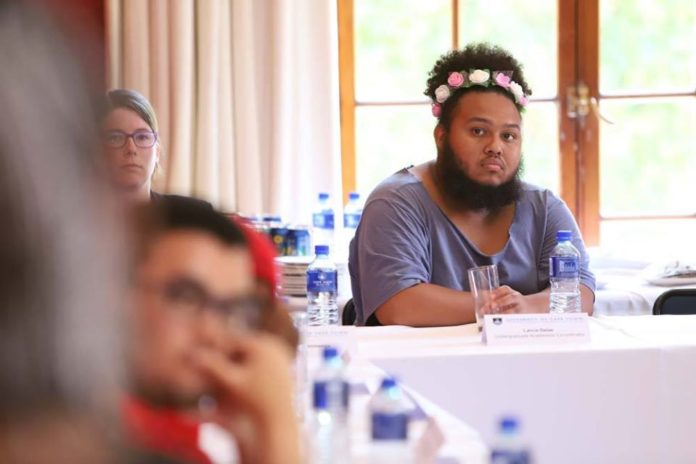 We spoke to Lance-Selae August, a 27 year old student leader at UCT. They are an Honours student in Theatre and Performance, and identify as non-binary.

Why did you decide to pursue tertiary education?

I was diagnosed with multi-drug resistance Tuberculosis(TB). I wasn’t responding to treatments. I started thinking about the drama degree I never pursued. I applied for admittance, residence and funding. Towards the end of the year I got firm offers for all of it. The stars aligned for me. It was now or never. I do Applied Theatre. It takes theatre outside of the normal theatre space. As an artist you are a facilitator in settings like disability homes. We work with parolees as well. It is a radical and social justice element to theatre. It is why I was drawn to it. I have a recreational and academic outlet for my political beliefs.

You recently got elected as an independent SRC member at UCT, tell us about your life in student leadership

You are very open about your gender identity; how have you been received at university?

I identify as non-binary. I express my gender identity in the form of wearing what is currently known as female clothing. It has been well received. There is a progressive element at UCT. I have received a few looks when I attend management meetings, but people contain their thoughts. You feel the judgement without hearing it.

What challenges have you faced?

I am the third member of the SRC from Elsies River. This is significant because Cape Flats students are excluded from these spaces. After Unyinene’s death outside of student spaces I was recognised as a femme body. The feminism around her death became toxic. I was rejected in those spaces because I present biologically as a male.  I was told I have no place talking about my gender-based violence experiences. I represented the oppressor in that moment. I overcame it and rejected those TERF’s (Trans Exclusionary Radical Feminists). I am selective in spaces I go to. I have had stones thrown at me walking home from church in a dress. I use an UBER,  I don’t walk anymore. These are global challenges for any gender diverse person.

You are a very active member in the New Apostolic Church; how have you been received there?

I grew up in the Old Apostolic Church, but it limited my expression of my gender identity, and the cult nature was not for me. I find that my religious expression is through music. The New Apostolic Church (NAC) is very musically orientated. In 2018 I decided to attend the NAC in Observatory, and became a full member last year. I get messages from people who ask me how the church responds to me. They tell me I inspire them to be open about their gender identity. My advice is always go for it. The church is administered by man. The way you express your religious identity is entirely between you and God. Don’t let the way you dress or your gender identity block a relationship with God. The bible says come as you are. Queer people grow up in religious spaces too. I have not encountered resistance. But I think it because the church is located in a student hub. I come from Elsies River, a Cape Flats area. I don’t think I will feel comfortable or safe to go to a NAC there in a dress. The church may accept me but I doubt some congregants will.

This is a wider systemic issue. In any area on the Cape Flats the effects of Apartheid really robbed our people of the opportunity to think critically, and learn about gender diversity. I could go into that space in a dress, but the only thing people are going to see is a man in a dress. They will just think of me as a “moffie”. Not as a gender diverse person or non-binary.

I see myself as a political being. My mere presence in spaces is educational enough. My confidence should be enough for people wanting to express themselves like me, but can’t. I dream of having a space for queer bodies that I can help, teach, assist and nurture. Be a mother to people.