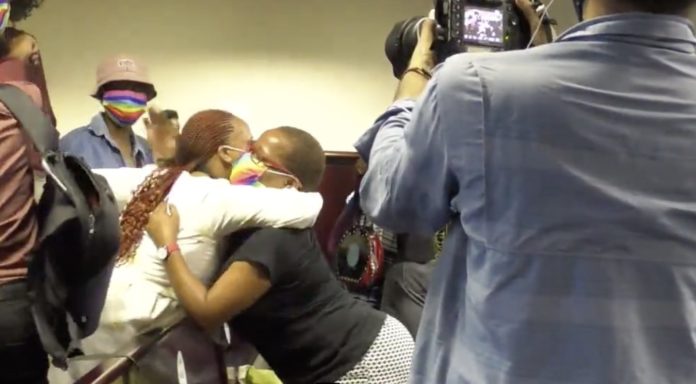 Botswana has decriminalised gay sex. The country’s court of appeal upheld a 2019 ruling of decriminalisation. The unanimous decision by five judges stated that criminalisation violated the constitutional rights of LGBQTIA+ people. Members of the gay community hailed the ruling as sign of true democracy in the country. The Daily Vox spoke to Monica Tabengwa, a lawyer and researcher from Botswana who specialises in LGBT issues in sub-Saharan Africa.

Botswana’s High Court decriminalised homosexuality in 2019. The court rejected the law that imposed a seven year prison sentence on same sex relationships. At the time, Judge Michael Elburu said,“Human dignity is harmed when minority groups are marginalized.” The law had been in place in 1965 and was described as a colonial import. The case was brought to court by a student, Letsweletse Motshidiemang who argued society had accepted homosexuality more widely.

The ruling was appealed by the government and the case had been postponed from October till November 29. The state argued it was not the court’s responsibility to rule this way, but with parliament to change laws.

#LGBQTILife: First ever pride parade is held in Malawi

Speaking to The Daily Vox, Tabengwa said the ruling was a major step, and that implementation needs to be the next step. The provisions that were removed never had a history of regular arrests or enforcement. Tabengwa said there had been discrimination like denial of services and intolerance by people on the LGBQTIA+ community.

The Botswana Attorney-General, Adv. Abraham Keetshabe released a statement about the implementation. Keetshabe stated that as the executive and instructed by the court, they must ensure implementation. Tabengwa said that the removal is not enough; specific protections for these communities have to be made.

“The constitution should state we are all equal before the law. In fact, we are so equal that we are going to include protections for all for this community,” Tabengwa said.

Tabengwa explained there is intolerance in Botswana and definitely stigma attached to being part of the LGBQTIA+ communities. There have been instances where teachers have denied trans kids from taking exams because trans boys are wearing pants. These are school regulations and the law was criminalising same-sex sexual conduct. There is no real definition of hate crimes, but there is some provision about insulting language.

This means one would have to prove that as insulting. Then it brings attention to the fact that a person is gay and not that they were insulted. The same goes for patterns of violence in same-sex couple relationships. The topic would be that they are gay and not the crime at hand, she said. A 2016 Afrobarometer report stated that 43 percent of Batswana are not opposed to homosexuals. Of the 33 countries surveyed, Botswana was ranked the most tolerant on the continent.

Tabengwa has been doing work within the LGBQTIA+community for 15 years. She said back then, she would not have thought Botswana would be at this point. The years that various organisations have put in has paid off. It has been a constant follow up and making sure you are not ignored is vital, she said.

“There is more information of available information that explains sexuality, sexual orientation, gender identity expression. When you put a human face behind a phrase it explains better. Having that has made a big difference in how people think and perceive,” said Tabengwa

She said the hearts and minds of people must change with the law. Changes need to trickle down in everyday life.

“People that provide services, whether it’s health services or in schools. Those are the issues that matter. They determine your future and how your quality of life is an LGBTI person. Those are the people who actually hold the control in terms of implementation,” she said.