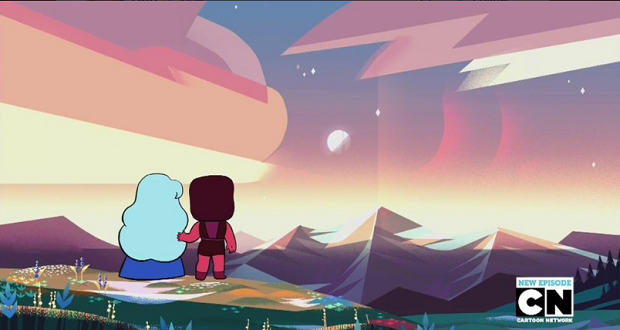 In the past couple of years, weâ€™ve been seeing more and more lesbian, gay and bisexual characters appearing in childrenâ€™s cartoons. We’re all about celebrating diversity that reflects real life, so weâ€™ve made a list some of our favourite LGBT characters.

Lincoln Loud lives with his parents and ten sisters, which of course can be pretty chaotic. On one of the episodes that aired this year, Lincoln decides to have a slumber party and invites one of his friends, Clyde, to join. Clyde is dropped off at the party by his parents, Harold and Howard McBride, who are your typical loving and overprotective parents. And – bam! – History is made as the first bi-racial married gay couple appears on Nickelodeon.

The Crystal Gems are a team of alien warriors who are the guardians of the universe. Steven, who is a half-human, half-gem, is the newest member who’s learning to use his powers while going on magical adventures. The show has some of the best same-sex couple representation, as well as genderqueer and bisexual characters on TV.

In one of the more recent episodes, two characters Ruby and Sapphire, are shown hugging and kissing each other before they fuse back together to form the character Garnet. So it’s like when Goku & Vegeta fuse in Dragonball Z, but without the poses. The pair’s fusion is a display of their love for each other, with Garnet being the physical embodiment of their love – isnâ€™t that the SWEETEST thing!

Iâ€™m sure that youâ€™ve heard about Adventure Time at some point in your life. The show about a boy, Finn, who goes on adventures with Jack, his adoptive dog brother, in a post-apocalyptic world. But letâ€™s put them aside for a moment. Throughout the show there were always hints that two other characters Marceline, the vampire queen, and Princess Bubblegum, ruler of the candy kingdom, had a bit of a thing for each other.

At a 2014 book signing, Olivia Olsen, voice actress for Marceline, chatted about a conversation with the show’s creator, Pendleton Ward, who confirmed the two characters had dated before. But that sadly this would not be included in the show, because not all the countries in which the show airs are accepting of LGBT people.

Even though we won’t get to see their relationship come to fruition, the subtle hints can at least provide us with some comfort.

Clarence is an eccentric kid who goes on crazy adventures with his two best friends, Jeff and Sumo. The show, which has been running since 2014, wouldâ€™ve potentially featured one of the firsts for Cartoon Network. In one episode two men meet up for a blind date, but excitement builds when it looks like they’re going in for a kiss, when instead they do a kiss on the cheek.

Spencer Rothbell, a writer of the show, said this scene was supposed to show them kissing on the lips, but was later changed. This would have been the first same-sex couple kissing to have been featured on Cartoon Network – but sadly it wasnâ€™t.

Legend of Korra may not be on TV anymore but we had to include it in this list – because the show and the characters are just that great. There have always been hints that two women, Korra, the avatar who has control of all four elements, and Asami, who is a trained engineer who can kick ass, were to be more than just friends. But, it was the finale of the show that confirmed what so many had guessed.

â€œOur intention with the last scene was to make it as clear as possible that yes, Korra and Asami have romantic feelings for each other. The moment where they enter the spirit portal symbolizes their evolution from being friends to being a couple,â€ said the co-creator of the show Mike Dimartino.