From the shores of the continent to Europe and Israel, there is no group of people around the world who are more abused and disregarded than migrants from Africa. These people are often escaping deplorable conditions in their home countries – which are created both by a failing African leadership, which is sponsored in many ways by unscrupulous European countries.

An explosive CNN report released in November 2017, revealed that migrants from Sub-Saharan Africa were being traded like slaves in Libya. Thousands of men were kept to work in the fields, while women were being sold as sex slaves. The international community were lambasted for the silence around the issue, with nothing being done to protect these migrants.
However, the situation in Libya is not something that just cropped up in the time of the media attention. Not only did the world do nothing, but some European countries have had a direct hand in creating the crisis.
Since 2010, Italian legislators have been aware of the slave camps.

The Kenyan writer and political analyst Nanjala Nyabola wrote in Foreign Policy that even though Italy and other European countries were aware of the problem, they nevertheless continued to give money to Muammar Qaddafi, the Libyan leader at the time, in return for him halting African migrants. Many migrants are held at detention centres funded by Europeans organisations, and subjected to despicable conditions. European governments were found to be directly responsible for the deterioration of conditions for migrants and refugees in Libya and elsewhere through their oppressive migration policies. In Libya especially, Doctors Without Borders (MSF) found that it was European funding for the detention centres that were keeping them running.

In an interview with The Daily Vox, Professor Loren Landau of the African Centre for Migration & Society at the University of Witwatersrand said: “It’s both the European legacy of colonialism and post-colonial interventions in the Cold War and exploitation of resources which is responsible for the creation of systems which are unstable and unequal.”

That leads to people living to go and find some place else to live a safer life. The problem therefore lies primarily with European countries and their policies, past and present. However, all the blame can’t be laid with them. African leaders’ roles in the problem cannot be denied in the way they respond to the problem and the situations created in their countries. Landau said: “The migrants often face terrible conditions which makes them leave their countries so why is the response to them so suspicious? There are many reasons why people move from their country of origin to another place. Migration is something that has been taking place for as far back as recorded history can trace. However, the exodus of people from the African continent particularly West Africa is something that is of grave concern.”

“Most migrants from the African continent come from Somalia, the Democratic Republic of Congo, Eritrea and Congo. Landau said: if the situation was just economic and African migrants were seen as only cheap labour, the response to them would be very different because both in Europe and Israel there is a need for cheap skilled or unskilled labour,” he said.

However, African migrants are often seen as threat to the culture and security of these countries in a deeply racist manner. Landau said: “African migrants are also viewed with suspicion especially if they’re male, black and Muslim. They are seen as a threat to the economy, to Christianity and Judaism, to race, and to security.”
Nyabola wrote that the responses to African migrants and their exploitation is slow, showing the rising global anti-black racism and the fear of the immigration of the other around the world.

Another developing situation that shows the the plight of African migrants and how they are treated around the world is to be found in Israel. The Israeli government are planning to force out African migrants from the country by threatening to arrest those who do not leave. On Wednesday, the Israeli prime minister Benjamin Netanyahu announced that African migrants (mainly from Eritrea and Sudan) would have until March 2018 to leave. Those who chose to go would be provided with a plane ticket and $3500, and those who still stayed would be arrested.

Netanyahu has also called these migrants “illegal infiltrators”, saying that they needed to leave for the country to be returned back to its citizens. In 2012, Israel introduced a border fence with Egypt  to stop the inflow of migrants, and has jailed many of the migrants who were fleeing war-stricken countries.

The migrant issue is one that often fluctuates in and out of international attention. When a boat carrying migrants or refugees capsizes: there is attention. When the slave trade emerged: there was attention. However, all too soon it goes away. But the issue will never truly go away. People will always move in search of a better life.

“The African Union and others within Africa need to recognise that they need to deal with migration in the continent.” says Landau. “They also need to build better frameworks that would allow full integration of the region which would mean better prosperity and opportunities for people to move next door rather than to another continent.” As for European governments, Landau says they need to work against military intervention and the kinds of securitisation that gave rise to the slave markets. Additionally, there needs to be a system which allows people to move safely.

Landau says: “Nation-states are not. We need to adapt our political systems to what people need to do to get ahead in the world.” 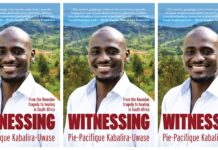