Home Voices Life at the Isipingo camp: â€œWe are your neighbours â€“ why do...
WhatsApp
Facebook
Twitter
Email
Print 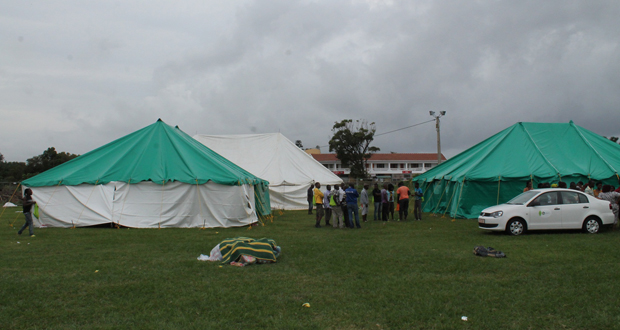 Foreign nationals working and living in Isipingo and Malukazi were forced to take refuge at the Isipingo police station last week after xenophobic attacks erupted. AÂ temporary campÂ was later set up at the Isipingo Beach sports groundÂ for more than 300 misplaced foreigners. The conflict comes after King Goodwill Zwelithini allegedly ordered foreigners to leave the country. QINISO MBILI visited the camp to find out how the occupants are coping. Twabi Amidu, Malawi, truck driver
The South African people donâ€™t like us. They entered our house in Malukazi, chased us out and took everything inside. Some of us got beaten up and we ran and left everything in the house. We had to take refuge at the police station. Two days later we were moved to this camp here. I donâ€™t like this place; it is inhumane to live like this while I have my own house. There are no bathrooms here â€“ we bathe at the tap. The last time I properly bathed was on Monday morning [four days ago]. Even the food we eat here is not good â€“ I donâ€™t think I will get used to it. When I came to this country I really didnâ€™t expect this. Back in Malawi you canâ€™t get a job. I came here to get a job and start my own life â€“ a better one than the one I lived there. The people of the Malawian Embassy were here today â€“ I am definitely going back home. It is sad that I love to stay in South Africa, but South Africans are chasing us out. Should things change in the future, I wonâ€™t mind coming back, but for now Iâ€™m going back to Malawi. Coco Bishogo, Democratic Republic of Congo (DRC), hairdresser
On Saturday [28 April] while I was in a taxi at Isipingo, my phone rang and I answered in my home language. While I was engaged in the call I heard an old man in the taxi saying in Zulu: â€œAre these people still here? They are going to get what they are looking for.â€ I felt a sharp feeling of tension, but it didnâ€™t last long and I soon forgot about it. While I was at the salon on Monday [30 April] with my two daughters, these men and women carrying all types of weapons chased us out of the salon. My head was buzzing with anxiety â€“ I didnâ€™t even hear what they were saying. All I could manage to do was to take my babies and run. Some of my clients had to run away with unfinished hairstyles. I lost all my money, equipment and products there. My daughters are so traumatised: they spent the better half of Monday crying and they still havenâ€™t fully recovered. Getting them to eat is a hassle and they continue to cry every now and then. They donâ€™t deserve this. On Thursday, my chronic headache went out of control and I had to be taken to hospital. There they told me I had too much stress and gave me some pills and I returned. I have had it with this country now: I guess they have finally succeeded in getting their point across. I will be going back to my home country now â€“ this is not the first time we are being attacked like this. Mulasile Jilie, DRC, fashion designer
It is hard to live in a tent like this. The mattresses they give us here only last three days, after that itâ€™s flat. When the violence began I had my child with me whose mother is South African. I had to run to a random crÃ¨che and leave her there because I couldnâ€™t come with her here. I called her mother to tell her what was happening and where to get the baby from. I am amazed at how much South Africans hate their fellow Africans. Things like these never happen to foreigners of other races. I am also surprised at how the king of the Zulus can make such reckless comments knowing exactly the kind of political power he has. I do not solely blame the king for what has happened, but it is his comments that evoked the suppressed hatred that some South Africans have for us. Personally, I was not attacked but I chose to run away while I still had the chance to. We are your neighbours â€“ why then do you treat us even worse than dogs? Even your neighboursâ€™ dog you donâ€™t beat up like this. Back home in the DRC they are fighting, thatâ€™s why I left. Now even here they are beating us â€“ what do we have to do now? Salima Mkeyo Fifi, DRC, salon owner
I was also attacked at my salon in Isipingo. On Monday morning my cousin from Umlazi called me and told me that she had heard that all foreigners in Isipingo were going to be attacked that day. I believed what she was saying but I couldnâ€™t just close business because of rumours â€“ I have children to support and bills to pay. When I started hearing shouts and screams from my neighbouring stalls, I knew then that it had started. I took my children and ran away. I couldnâ€™t even lock up behind me. I had never seen so much hatred in the eyes of people in my entire life. While I ran away from the salon with my two kids, one held by the hand and the other on my back, they started throwing big stones at us while a few others went into the salon and did as they pleased. My son, the one carried at the back, was hit by a stone in the head and bled. I nearly collapsed when I noticed the blood a while after he had been hit. One client was assaulted from my salon for doing her hair at a foreign-owned salon. I ran until I caught up with another crowd of victims who were on their way to the police station. South Africans need to visit other countries and see how visitors are treated. This is not the way to treat other people. All day I have only eaten two slices of bread; the last time I bathed was Monday. My children are traumatised and one of them is injured. How can they make us live like this? Nonhlanhla Dlamini, South Africa (father of her childÂ isÂ Burundian)
I feel very embarrassed for South Africans. We say that foreigners take our jobs, but we are lazy and arrogant when it comes to work. The people who attack foreigners and tell them to go clearly havenâ€™t thought this through. The father of my baby is a foreigner and so are many other South African womenâ€™s. If you tell them to go away it is many of your own South African sisters who will struggle as single mothers. When these children get delinquent in the absence of their fathers, there will be more street kids and drug addicts to rob and mug you. I urge all South Africans to make peace with our fellow African brothers and sisters who have fallen in love with our beautiful country. It is hard for them to just pack up and leave, as they have already established stable lives here. Joe Nene, South Africa, political advisor at the office of the mayor
This is the first time in Durban where we had to set up a camp. In this short amount of time we have managed to put up tents, security, food and water. It is not yet a comfortable place for people to stay in but things can only get better from now. We are still holding talks with officials from different departments of the government on how to solve this. We are also making contact with their [foreign nationalsâ€™] home countries to negotiate the deportation of those who want to go back. We will also talk with the people through ward mass meetings to try and stop them from continuing the attacks. We have received a hint that some of the Isipingo attackers were actually former employees of [a livestock retailer inÂ Isipingo] who had lost their jobs to foreigners that offer cheap labour. This is being investigated at the moment. I can estimate that in three weeksâ€™ time all this will be sorted.

– All images: By Qiniso Mbili.