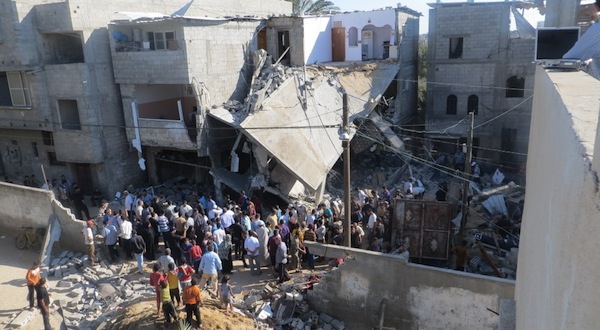 â€œI am dying to live,â€ he said when told that leaving Gaza illegally aboard a boat headed for Europe could cost him his life.

Did he survive? No one knows. Every day we hear reports about boats loaded with Palestinian passengers trying to start a new life sinking; huge numbers and few survivors, two survived out of 500, eight out of 350.

While many voice their sympathy, disapproval or approval for what is happening, few consider the reasons that push the desperate into choosing to make such a dangerous journey.

Life in Gaza is hard. You study but find no jobs, dream of marriage but have no money for it, try to survive with the understanding that for you the biggest luxury may be clean water or a couple of hours of electricity.

23 August 2014 is a day that I will never forget. We had already been in the war for over a month and a half and no place was safe in Gaza. Everyone was waiting for their turn to die.

That day was the most horrifying for me. It was the day of the bombing Al Zafer 4, the residential tower next to mine; an eleven storey building leveled in less than a minute. I remember flying into the air, feeling dust in my mouth, panicking and stepping over the broken glass that lay everywhere.

After the bombing my mom lay facedown on the floor. We tried to speak to her but she remained silent for two minutes. We thought that we lost her. It was the worst two minutes of my life.

Leaving the house wearing nothing but shorts and an undershirt, I went with my family to a friendâ€™s house. We had no choice. Weâ€™d been told that three of the towers in our areas might be bombed.

I received dozens of phone calls asking about me and my family. One of them was from my dearest friend who had decided to immigrate (legally) a short while before the war. She and her husband had everything – jobs, education, family, friends who loved them and good life. But they decided to leave all of that and seek another life where they would have to start from scratch.

She told me that she simply wanted to be happy, to feel safe when she has her future children, to have a life where her biggest dream was not having electricity for a couple of hours a day.

â€œZiad, do you still want to stay in Gaza?â€ she asked, crying.

Itâ€™s a question that every person in Gaza has asked themself. How many years will we waste dreaming of a better Gaza and a free Palestine? Will it even happen in our time? Will we be alive to witness this day?

The war is over but our pain is not, and will never be. School has started but there are still many displaced people. They were promised compensation for their loss but nothing has happened except for receiving a small amount of money, barely enough to rent an apartment for a couple of months.

The ones who were lucky enough not to lose a family member or a home go to work and carry on with life as normally as we can. We smile sometimes, we cry sometimes. Most times we live with no feelings, just numbness.

With every passing minute and with every piece of news about a friend or family friend member leaving on a boat, jeopardizing their life, and with every dream being killed while living under the siege, that question finds its way back into my heart and mind: Ziad Bakri is a Palestinian living in the Gaza Strip. He is a translator, blogger and teacher.Â  Read his personal blog or follow him on Twitter.