Home Voices Life with HIV: “I need to take the blood tests, but I...
WhatsApp
Facebook
Twitter
Email
Print 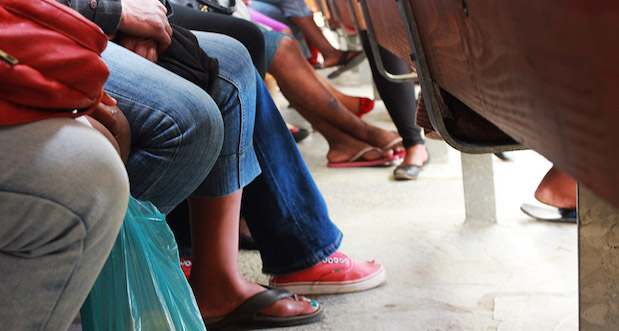 HIV can have a devastating effect on people and their families, particularly if they are poor and unemployed. Without treatment you may be too ill to work, but without money you might not get the treatment you need. MBALI JILI* (25) told Zimasa Matiwane about her struggle to get onto treatment and hold down a job at the same time.

I have been HIV positive for five years. About two years ago my CD4 count dropped really low and I started taking anti-retroviral treatment (ARVs). But it took two months after the doctor ordered the treatment for me to receive it.

I was not working at the time; it costs R16 returnÂ for transport to go to the clinic and I had to borrow money to get there. I would get to the clinic at 5.30am, see the pharmacist at around 9.00 m and I would be told my treatment was not there, and asked to come back the following week. This went on for about two months. It was hard because I was stressed about being ill â€“ I had just been diagnosed with tuberculosis and kidney problems. I was sick; I thought I was going to die.

Getting ARVs when you are ill and not working is hard. To get to the clinic when I was sick was difficult when I had no money to hire a car because I would call for an ambulance and be told that there were no ambulances. When the ambulance is available itâ€™s also difficult. I had to meet the ambulance at the police station, because they were afraid of getting hijacked in the township. The police station is actually closer to the clinic than it is to my house anyway. I live with my two children, aged 14 and five; they could not go get the ambulance for me.

I could not get government grants because I had not started on ARVs, thatâ€™s what the doctor told me, and I needed the doctor to sign and confirm that I qualify for a disability grant otherwise the social security agency, Sassa, would not accept my application. I struggled to get the ARVs and had no money to go to Sassa anyway.

I was happy when I finally received my treatment but fetching the ARVs is another struggle. The clinic is 30 minutes away. I can walk there now because Iâ€™m not as sick any more but I have to leave home at 4.30am and even then I will only leave the clinic again at 2pm. The ARV clinic at Inanda, where I live, services seven sections of the location, and there are only two doctors. Sometimes thereâ€™s one doctor and other times thereâ€™s no doctor. When I have to see a doctor and thereâ€™s no doctor then I just go back home. The pharmacy opens at 8am and closes at 4pm, and it is always full. If I get there at 7am then I would not get my ARVs because of the queue.

Right now I am working as a security guard. I started in mid-January. Itâ€™s a casual job, but thereâ€™s a chance I could be made permanent. I didnâ€™t tell my boss about my HIV status. I am supposed to do blood tests every six months to find out if my treatment is working or not. I was meant to check now in February but I canâ€™t ask for a day off, at a casual where I still want to be hired [permanently], within the first month of working. I need a day off because my job starts at 5.30am and I knock off at 6pm. The clinic doesnâ€™t open on weekends, when I have my days off.

This worries me because the treatment could be causing damage to my health, but I canâ€™t risk my chances at finally having a job either. I am a breadwinner; my children and I need the money. I need to take the blood tests but I also need the job.

Listen to the original interview, conducted in isiZulu:

– As told to Zimasa Matiwane.
– Featured image by Ra’eesa Pather.
* Name has been changed.