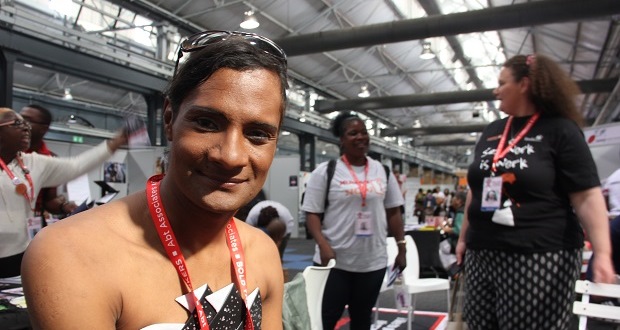 Over 15, 000 delegates from all over the world are at the International AIDS Conference, each one different in their own right. Advocate for health and human rights of sex workers, LEIGH DAVIDS, told the Daily Vox about her identity and her experience at the conference.

We were told that everyone working at the International AIDS Conference was sensitised about issues of gender and sexuality â€“ which is not the truth. I had to spend a decent amount of time with security explaining that because as a transwoman, my preferred name is Leigh Davids while my ID document identifies me as Waleed Davids. I had to make them understand and accept my preference.

This whole experience made me feel like, why lead me on? This is what you say, but that is not what it really is. I know my ID says Waleed Davids, but my preference is Leigh Davids and that is because I am not a man.

Iâ€™m a 37-year-old transwoman and have been a sex worker for the past 23 years. I advocate for the health and human rights of sex workers, and attending this conference is very important to me. I just gave a talk where 200 people attended and listened to me talk about my identity, sexuality and health care. Itâ€™s vital that weâ€™re all included in discussions such as these because if we donâ€™t amplify our voices and fight for our rights, who will? Itâ€™s been really interesting answering some of the questions people asked about being transgender but most importantly, itâ€™s great that such discussions are taking place.

The hardest thing about being a sex worker is survival. Having to be homeless, having to get tested every day to go to work and having a space of your own. Sometimes the police or the security take all of your clothes and you need to go to work because youâ€™ve got a client and you just have to bring it all together within five minutes. Discrimination from police and lack of access to health care are just one of many challenges Iâ€™m faced with.

Itâ€™s been a tough journey. It started out when I was 14 years old after I was evicted from home for being a transwoman. My family didnâ€™t understand what it meant to be trans and they didnâ€™t accept it, and being a Muslim family made it more challenging. After the eviction, I had nowhere to go and the first point of survival was the space of sex work being offered to me. I have been a sex worker since then and I will never give it up. Never in my entire life. It offers me the freedom of expression and the chance to be a transwoman and have no one question it. It offers me the space of relieving poverty.

People look at me in a certain way; they look at how I was born and look at my genitals and my expression. People see the difference that youâ€™re saying that youâ€™re a woman that has breasts, that has a vagina, but you donâ€™t. And that has been so tough, trying to change ideas of who I am supposed to be â€“ and who I perceive I am.

Leaving home from the age of 14, I was always thinking I was gay. Six years ago I only came to understand that Iâ€™m transgender because of the language, the education, the fact that it is so different when you live in poverty. With language itâ€™s so different. You live a life where this what you think you are, but once you come to understand with language, that is not who you are.

Being gay is about sexuality – your sexual preference. Whereas being transgender is about conforming to who you are.