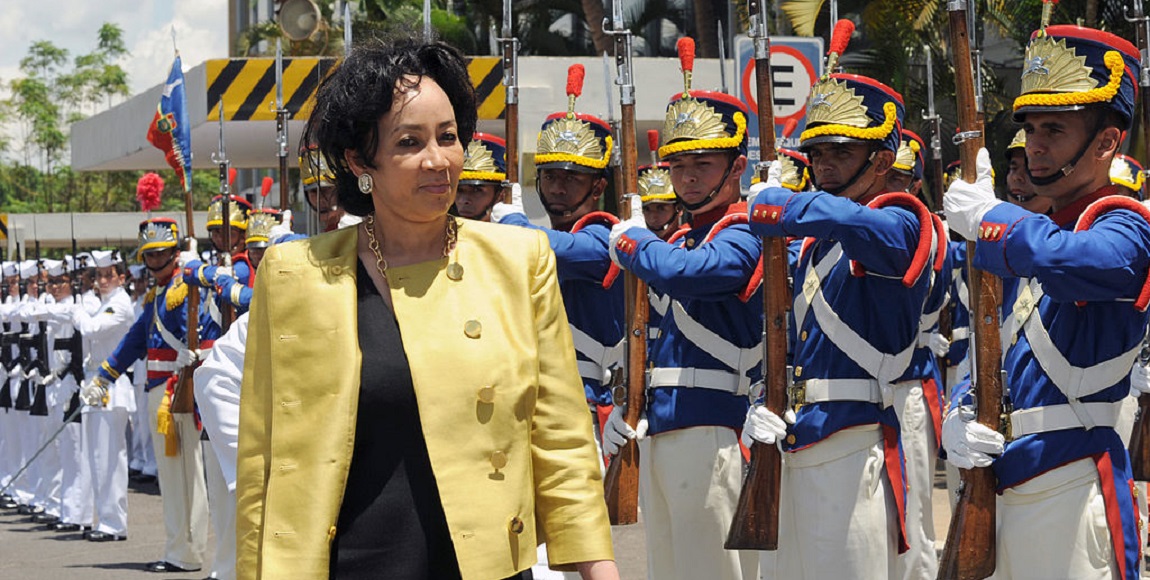 Lindiwe Sisulu was dragged on Twitter on Thursday for her problematic views on feminism and gender-based violence. And honestly, she deserves it.

Human Settlements Minister Lindiwe Sisulu inflamed South Africans when she said she â€œbelieves Khwezi believed she was rapedâ€. Sisulu, who is running for presidency in the upcoming African National Congress (ANC) elections, told Radio 702â€™s Eusebius McKaiser that her campaign is centred around gender-based violence in South Africa. The interview went awry when a caller asked the minister if she believed Khwezi considering the power dynamics in the case. Sisulu fumbled.

The interview is available online. Skip to the 24th minute to hear the exchange.

â€œKhweziâ€ is Fezeka Kuzwayo, the daughter of an ANC member who was imprisoned on Robben Island with President Jacob Zuma for 10 years. Kuzwayo accused Zuma of raping her in 2005. He was acquitted of the rape in 2006 and Kuzwayo later fled the country after his supporters actively threatened her. She passed away in 2016 at the age of 41.

At first Sisulu tried to evade the question. â€œYes, I believe Khwezi, I donâ€™t understand what that question is intended to mean,â€ she said.

Then she said she was â€œdeeply concernedâ€ about violence against women, rape and the death of women. â€œWomen continue to be objects and objectified to patriarchal nature of society,â€ she said. But McKaiser pressed her to specify what she meant when she said she believed Khwezi. Sisulu replied that she didnâ€™t know what miscommunication had taken place and said of Kuzwayo: â€œI believe she believes she was raped.â€

Even McKaiser was confused.

Lindiwe Sisulu “I believe she believes she was raped
Huh? What does that mean? @Radio702 @CapeTalk #LindiweOnEusebius

McKaiser pressed further and Sisulu said she didnâ€™t have enough evidence and that the law said â€œComrade Jacob Zumaâ€ was acquitted. She said that she enjoyed reading the court judgment and that she thought it was a balanced outcome. â€œ[The judgment] addresses what ought to happen in society and that which the law dictates,â€ she said. These two concerns were married to her satisfaction, she said.

McKaiser then asked if she believed Jennifer Ferguson, the singer and former ANC MP who recently accused sports administrator Danny Jordaan of raping her years ago. Again Sisulu fumbled, saying feminism is not about believing survivors, but about changing society’s perception around women abuse. â€œWomen must fight to push against boundaries of patriarchy because men will not let go,â€ she said.

Do you believe Jennifer Ferguson? I ask Sisulu. “It is not about believe but about society.” Huh? @Radio702 @CapeTalk #LindiweOnEusebius

McKaiser told her that her position was not good enough. He said survivors of rape are never sure they will be believed – thatâ€™s why they donâ€™t speak out – and that being believed is important in a survivorâ€™s journey for closure. He also said she needed to have empathy for the way justice and law donâ€™t always coincide.

Rape survivors do not only need society to change, and men to stop raping. They ALSO need to be believed when speaking. #LindiweOnEusebius

Twitter immediately aired its doubts about her presidential candidacy, her feminism, and her general lucidity.

This lady lacks objectivity & quite frankly doesn’t come across as trustworthy.I don’t want her as my president #LindiweOnEusebius @Eusebius

Is it a criteria for women in @MYANC to be anti-feminist? I’m sure the @ANCWomensLeague is pleasantly surprised at Sisulu#LindiweOnEusebius

Sisulu later responded, saying her opinion is â€œsecondaryâ€ to the courtâ€™s when it came to Kuzwayoâ€™s rape allegations.

Later on Twitter she commented: “I believe Khwezi. Itâ€™s a question of whether we have necessary structures to support them (victims of abuse), not whether we believe them or not.”

Respect us please. Khweziâ€™s life was not a game and her story is not a toy. #LindiweonEusebius

But Sisuluâ€™s explanation simply isnâ€™t good enough, especially coming from a woman who aspires to the presidency – not just of the ANC but of the country. Her comments come off as condescending. As McKaiser reiterated in the interview, itâ€™s important to believe survivors of sexual violence.

Justice and the law do not always coincide. Redi Tlhabiâ€™s book â€œKhweziâ€ attests to the power dynamics in the 2006 rape trial. Kuzwayo faced a gruelling, invasive and traumatic cross-examination. She also faced a physical examination to determine whether rape had actually occurred. More than Zuma being on trial for raping her, she was on trial to prove that she had been raped.

What Sisulu fails to acknowledge is that we donâ€™t have to solve gender-based violence using one catch-all solution; we can change societal perceptions AND believe survivors. But first we have to believe survivors.