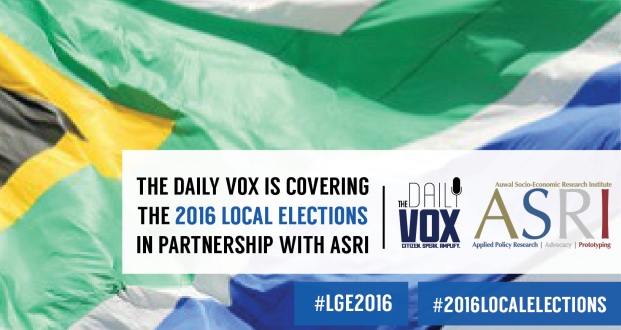 3:30PM: We’ll be taking a break for a bit, catch us on Twitter @thedailyvox or on Facebook.

3:00PM:Â The Electoral Institute for Sustainable Democracy in South Africa (EISA) observer mission released its preliminary findings of this year’s elections in a press conference. Generally, things look good but they had some recommendations.

EISA: campaign process was generally peaceful and vibrant but run-up to polls had violence, incl. political assassinations in KZN and EC

EISA: The 2016 elections were conducted on in a transparent and fair manner in line with the constitution. #LGE2016 #ElectionResults

"There still exists a gap in the regulation of private sources of funding." #LGE2016 pic.twitter.com/0JNcRjoyDd

EISA: To parliament we would like to recommend legal reform of funding. #ElectionResults #LGE2016

1:15PM: Mmusi Maimane’s in the house. With things looking very close between the ANC and DA in Joburg and Pretoria, he’s been asked about potential coalitions with other parties.

While many seem to be preparing for #IfDAWins, we’re reminded that there’s still a lot of counting to go, and some of the bigger municipalities like Soweto, Diepsloot and Ennerdale are yet to be finalised.

#ElectionResults: Joburg and Pretoria are too close to call

12:00PM: We’ve just come out of a press briefing by the Chief Electoral Officer, Mosotho Moepya here at the ROC. He explained that there had been a disruption at the JohannesburgÂ results centre earlier this morning. Â A large number of presiding officers all arrived at around the same time, and, understandably tired after a long day of admin duties, they got frustrated at the delays. The Vice Chairperson andÂ  Provincial Electoral Officer resolved the situation, though.

At last count, the voter turnout is 58.29% – slightly higher than last elections. Moepya reminded us that the results from larger municipalities tend to come in after smaller ones, so it may still be too early to tell.

Moepya denied receiving any objections from the EFF and independent candidates who are apparently unhappy with the IEC in Tlokwe and are demanding a by-election. He also said that the IEC had not received any complaints of voting stations closing early on Wednesday.

11:30AM: While we wait for results to come in, Dana Da Silva and Khadija Patel had a chat about the results we’ve seen so far, surprises and what election day meant to us.

10:00AM: Our roving reporters, Aaisha Dadi Patel and Jameel Abdulla are hard at work, catching up with party officials at the results centre.

So far, the IFP are excited about having taken back Nkandla, and are hoping for good news in Gauteng too.

We spoke to the UDM’s Thandi Nontenja, who says that if smaller parties remain silenced, South Africa is in danger of becoming a two-party state.

09:30AM: Goooooood morning everyone! The Daily Vox team is at the IEC’s national results centre in Pretoria, eagerly awaiting the results of Wednesday’s local government elections to be tallied. If you haven’t yet caught up on what election day looked like, check out our live blog from yesterday here.

The team is at the results centre in pta, really missing @mbaliphala and @I_am_Msuthukazi! #Elections2016 #LGE2016 pic.twitter.com/tGxU9bA8Vk

While the rest of us were still catching our breath from the excitement of #VotingDay, Western Cape Premier Helen Zille found her second wind and took on the fallists with some controversial tweeting.