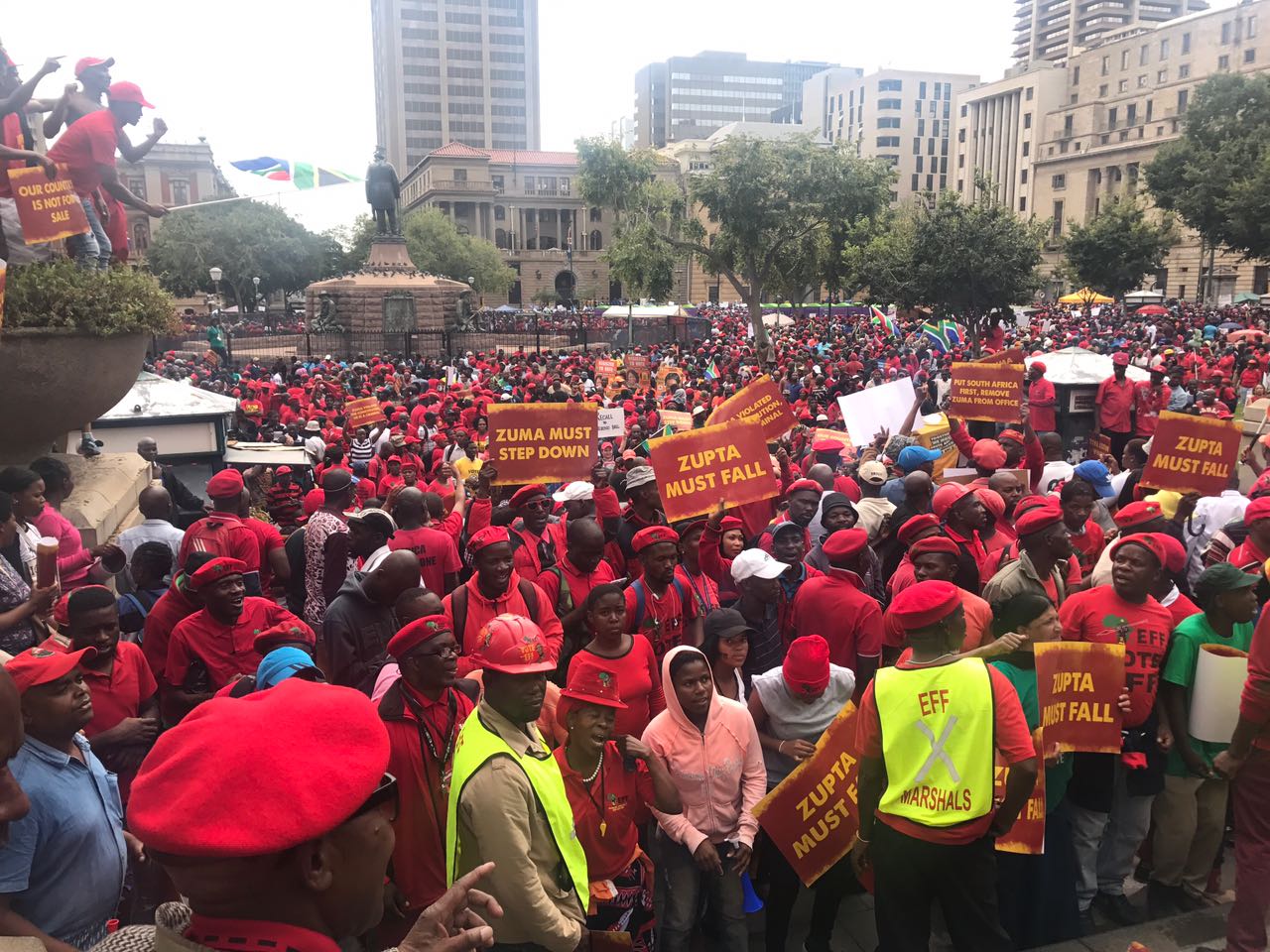 â€œIt has started now, itâ€™s on,â€ says Malema at the end of his speech.

Even though the official programme was not quite over, protesters immediately started to leave the Union Building lawns.

Guess it’s over. That was anticlimactic.

We’ll keep you posted if anything changes. EFF leader Julius Malema took the opportunity to needle Zuma, saying Zuma should â€œgo back to the villageâ€.

As for plans after this march is done? “This is a rolling mass action,â€ Malema said, adding that the protests would be going to every province.

Notably absent from the podium is DA leader Mmusi Maimane. Instead, spokesperson Phumzile Van Damme led the crowd in a rendition of “Unity’s the power”.

Mmusi must tell us why as leader of the opposition, he was not at today’s march #OppositionMarch. I find it rather odd.

The crowd outside the Union Buildings is huge! Reporters are estimating the size of the crowd to be around 100 – 120 000.

This is yet to be confirmed though.

13:00 PM
EFF members addressing the crowd. If our political stance was based on singing ability, The People’s Bae – the EFF’s Mbuyiseni Ndlozi – has our vote!

“Zuma must goooooo” for who? The EFF’s advocate Dali Mpofu has some new lyrics for marchers to sing.

Thousands here at the lawns of the Union Buildings. #NationalDayofAction pic.twitter.com/wsx42s5RV9

EFF leader Julius Malema has called the crowd closer to “give Zuma a birthday present”. He’s in high spirits today – probably because the crowd is mostly red.

You have to admit, this picture of the opposition party leaders at the front of the march in their multicoloured t-shirts, is kind of cool.

Overheard in the newsroom: Look at the shoes Terror has on, no wonder he’s tired.

Protestors have reached the Union Building. Barbed wire has been deployed to keep protesters at a distance.

Some are now estimating the size of crowd at about 30,000 people.

Conservatively, I’d say there are 30,000 people ahead of me on Madiba Street. #OppositionMarch pic.twitter.com/4KFPA1G9uX

The march is underway and protestors are chanting “Zuma Must Go” as they walk. Butternuts and coffins for Zuma are par for the course, here.

Butternuts and coffins mark the crowd as #OppositionMarch makes its way to Union Buildings for #NationalDayofAction. pic.twitter.com/G4iW3yKilZ

The march towards the Union Buildings has officially started.

Our reporter @RumanaAkoob with #OppositionMarch in Pretoria. If you weren’t able to make it, live vicariously through her updates pic.twitter.com/sKGel83Qca

Pretoria is a sea of red, blue and green as opposition party leaders march arm in arm towards the Union Buildings. They plan to hand over a memorandum once they arrive.

Police are keeping a close eye on the marchers, and say they are expecting 10 000 people to take part. But, knowing the EFF and the numbers they can pull, we expect it to be much bigger.

Thousands of South Africans are gathering on Wednesday morning in Pretoria calling for President Jacob Zuma to step down.

This comes after movements around the country last week called for #ZumaMustFall.

Wednesdayâ€™s march, which is being led by the EFF, also includes opposition parties Agang, ACDP, Congress of the People (COPE), the DA, IFP and UDM, as well as NGOs and religious groups. All this, while Zuma will be attending his birthday rally at Walter Sisulu Square in Kliptown.

Protesters started gathering at Church Square in Pretoria early on Wednesday. A march to the Union Buildings is set to begin at midday.

#NationalDayOfAction: Despite the dreary weather, @EFFSouthAfrica supporters are ready to converge on the Union Buildings. pic.twitter.com/qX7mHjxAxV

Chants of “Zuma Must Go” could be heard early on, around the square.

COVID-19: The Cure Could Be Worse Than The Disease For South Africa