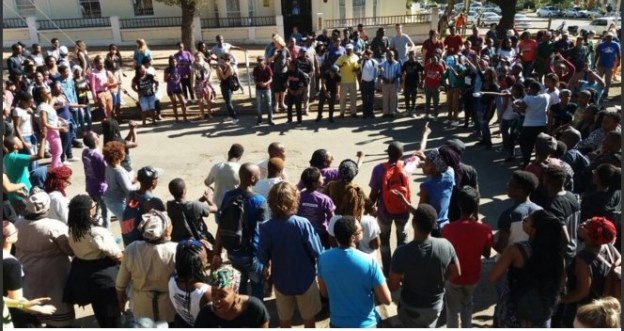 Students at Rhodes University have been protesting against rape culture at Rhodes, as well as its sexual assault policies since last week. The protests were mainly orchestrated by #Chapter212, a movement against rape culture at the university. The protests have resulted in a complete shut down of the university. This blog will be updated throughout the day.

The university currently known as Rhodes has obtained an interdict against students from blocking entrances and disrupting classes.

But according to the SRC, it will not go unchallenged.

And students are upset about the way that their vice-chancellor Sizwe Mabizela has handled the situation.

Workers at the university have now also gathered to show their support for the protest.

Workers gathered at drama department. In full support of our movement #RUReferenceList pic.twitter.com/uynxd1qCFc

That’s all from us for today, folks. Check in tomorrow as we continue to bring you the latest on #RhodesShutdown and #RUUReferenceList.

Vice-chancellor at Rhodes,Â Sizwe Mabizela, has told eNCA thatÂ a task team has been set up at the university to deal with the allegations of sexual violence at Rhodes.

#Rhodes sets up a task team to investigate allegations of sexual violence on campus. We spoke to the Vice Chancellor https://t.co/RMQfIJmUOo

The protesters who were arrested earlier today were welcomed back with celebration.

The SRC has tweeted that the five accused students have been released Â on a warning, and will appear in court on 20 July.

The five accused students have been released on a warning, until further investigation.The students will appear in court on 20 July.

The newly assembled task team is still meeting but in the meanwhile, Activate is reporting that the university will remain shut down until next Monday. The arrested students have arrived at the magistrate’s court, after hours, for an urgent application so that they don’t spend the night in jail. The charge is reportedly obstruction of traffic.

A meeting is underway concerning the proposed task team that will address issues of sexual violence at Rhodes. The meeting includes students and staff. They are invited to propose amendments to the task team’s terms of reference.

A third charge, that of endangering traffic, has reportedly been added to the charge sheets of the arrested students. They have reportedly left Joza police station.

Stuart Hoosen-Lewis, a journalist with The Daily Vox, has released a statement addressing the inclusion of his name on the #RUReferenceList.

Statement from The Daily Vox editors:

A journalist working with The Daily Vox was named on the Rhodes reference list. The journalist has since been placed on a leave of absence while we conduct an enquiry into the allegation. The Daily Vox is committed to principles of social justice. Inherent to the promotion of social justice is the rights of survivors of sexual violence to pursue justice. We support all calls to end sexual violence.

The university has seemingly backtracked on an undertaking to put up the bail for the arrested students, with the Dean of Student Affairs, Dr Vassiliou, saying that it will now be covered by the students’ families. Students are also collecting funds for their arrested comrades.

Money collection to bail out RU students who were arrested this morning.#RuReferenceList pic.twitter.com/BvkLsPmLSF

A meeting of male students is taking place to discuss what can be done about rape culture at the university. Activist Malaika Mahlatsi, stresses the importance of these conversations and how problematic the language around them can be. She says men need to be committed to the struggle; that it needs more than their hearts to be in the right place and a willingness to engage.

The meeting concludes with an undertaking that a message of support for the “sisters” will be drafted.

Students have been protesting since last night, and started again at around 6am today. The university was shut down as a result of the protests yesterday, and students were protesting at barricaded entrances. Traffic control vehicles pulled up to barricades by Prince Alfred Street and students started to take down the barricades on the street. Students at the Eden Grove barricade were shot with rubber bullets and attacked with pepper spray.

This video from Sanele Ntshingana gives us a good idea of the atmosphere at Rhodes this morning. #RUReferenceList pic.twitter.com/cCT1YUvOm5

At around 9am, Carla Botha, a member of the Activate student paper at Rhodes, was arrested.Students began to argue for police to release her. She is seen in this video having an asthma attack, while Vice Chancellor Sizwe Mabizela pleads with the police to release the arrested students. The arrested students are being held at Joza police station, but they have not yet been charged. The Dean of Student Affairs has told students that bail will be covered by the university.

Back at the university, students, staff and parents have congregated at Purple Fee Square and are singing and chanting in support of the students

The SAPS, meanwhile, have released a statement regarding this morning’s use of rubber bullets, pepper spray and stun grenades to disperse protesting students. They confirmed that five students have been arrested, and face charges relating to the Gatherings Act.

Statement from SAPS regarding this morning’s use of rubber bullets and tear gas. #RuReferenceList pic.twitter.com/blJUIksPYf