Home Voices Living below the poverty line: “It is painful living from hand to...
WhatsApp
Facebook
Twitter
Email
Print 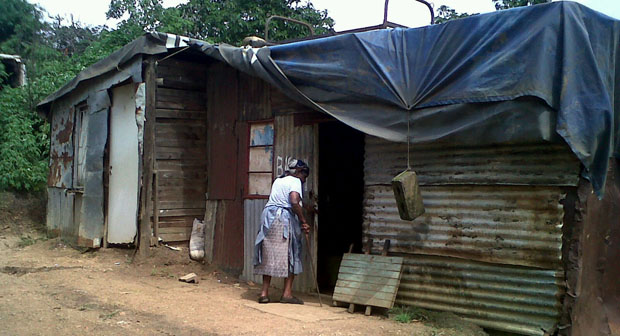 More than a quarter (26.3% to be exact) of South Africans living in extreme poverty are in KwaZulu-Natal, according to a report by Statistics South Africa even though the province accounts for only 19.8% of the country’s population. One such household experiencing extreme poverty “ defined as less than R26 a day” is the Magubane family. Zimasa Matiwane spoke to NOKWANDA MAGUBANE, 81, in Richmond Farm (KwaMashu) to find out what it takes for a family of three to survive on R1,350 a month.

I have lived in this shack for many years, with my daughter and her two children. When my daughter passed away, I became the children’s only guardian. Our situation has been like this for a long time.

I used to work as a domestic worker part time in Clairewood, but when I got older I had to stop. I do not get any pension fund from the odd jobs I did back then “ I live on government pension. It is not enough because there are three mouths to feed in the house and how can we survive on R1,350? It is just a means to get by. I have a garden where I plant vegetables because I cannot afford to buy them, but that is seasonal. That is how I sometimes manage to eat nutritious food. Our staple food is pap, rice, potatoes, soup and meat once in a while.

That is mostly what we can afford. I get my pension and I have to buy electricity, groceries, clothes, uniform, shoes, school bags and other house essentials.

None of the children work: my granddaughter is in her early twenties, but she just had a heart operation; she is frail, she can’t look for a job.Right now she is in hospital and I have to borrow money for her transport fare for hospital – money I have to pay back at the end of the month.

My grandson is in grade 12. I do not get foster care for him, and I did not even know that existed before you mentioned it.

We live a difficult life, as you can see. As old as I am I have to worry about where food will come from: that is not good for my health. The groceries I manage to buy with pension money do not last us to the end of the month.

We then survive on the mercy of neighbours who give us food. It is painful living from hand to mouth; it is worse when even that money is not enough.

On the day of my pension pay out, I come back home with little money left and there is never money left for emergencies. I do not even have a funeral cover because there is no money to pay for it.

Once something in the house breaks there is no money to replace it. My roof is covered in plastic and I don’t have money to fix it. All the money goes to food. The shack I live in is no place for an old person to be living in. When it rains we get rained on, when it’s cold, I get sick with flu and when it’s hot I can’t even breath in there.

My heart longs for my village, where I was born in Umkomazi. But I can’t go back because the children want to live in the city, it is where there are job opportunities.

My wish is that my grandchildren get an education and find good jobs. It’s not about me anymore, I will die soon and I don’t want to leave them in suffering.

– As told to Zimasa Matiwane.

– All images: By Zimasa Matiwane.