Home Government ANC councillor in Durban: “You have to be the eyes and ears...
WhatsApp
Facebook
Twitter
Email
Print 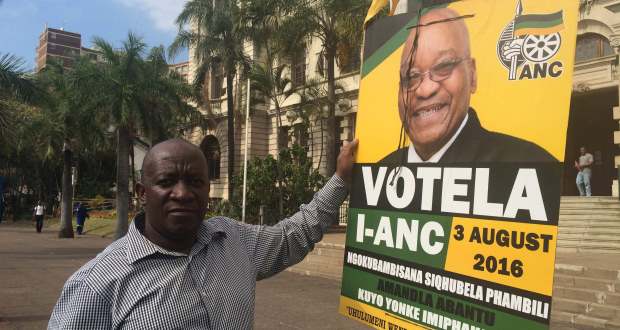 Durban’s ward 26, comprising of beachfront areas and tourist spots, is a hotly contested area in this year’s local government elections. The ward was taken from the DA by the ANC in 2011. The Daily Vox spoke to the current ward councillor, Bongmusa Dlamini, to find out what he is prepared to do to hold on to one of Durbanâ€™s most important wards, and the challenges he faces as councillor.

My main space is the office which is where I get to interact with the public. They mostly want proof of residence letters and are seeking assistance with a number of other personal issues. Other than that, my day is filled with meetings and visits to different body structures within the city like the CPF [community policing forum], the police station and others.

This ward has specific issues as it is in the inner city. The main challenge is here is overpopulation – people flock here from the townships, rural areas and even from other countries in the hope that they will get better economic conditions. Buildings that were not initially zoned for residential use have been occupied by residents because of the lack of residential space. People are renting in buildings that had been mini factories. Here, we have traders coming from rural areas; they don’t afford flats or traveling everyday so they end up sleeping in the same space in which they use to trade – in the streets. The city is deteriorating because of the filth and dilapidated buildings. This overpopulation is the mother of all other smaller problems in the area.

The untidiness of the city also comes from this. People are unemployed and this makes them end up loitering in the streets. Their abundance of time coupled with the poverty breeds fertile ground for petty crimes.

We however have a plan to tackle this. Under the department of economic development, we have come up with a city rejuvenation project. We are past the stage of promises right now; this project is in the pipeline. This project aims to beautify the city and improve the city’s position as a tourist destination. Some of the investors we have partnered up with are from Malaysia, Universal Studios and Transnet. It will create both permanent and temporary jobs. We have encouraged these investors to mentor local black businessmen in industries relevant to them as a form of boosting equality. You can see that most sectors are saturated by white businessmen.

We plan to convert uShaka Marine world into a theme park, have a cruiseliner at the port, build a walking lane that will connect South and North beaches and also give Universal Studios land to build a studio in North beach.

As a good councillor, you have to be the eyes and ears of the people. You should be a good listener who is visible and easily accessible to the people. Also you should act upon people’s challenges and problems. You must also be prepared to learn, interact more with the people than the officials because that is who you work for. In the ANC we are taught to be for the people, we have good guidance on that.

I have managed to renovate the Mansel [Road] market. Informal traders have been using that market for decades and it is one of the busiest. It had been in a deteriorating state, but after the renovations it has become much better. I have people who are now able to put bread on the table because I have made it conducive for them to get temporary and permanent jobs; these people are not less than 150. I have also encouraged big companies like Group Five to take some youth from my ward and give them skills development opportunities. Some of them were taken for employment.

The campaign is going well; we are doing walkabouts, distributing pamphlets and people are receiving us well. But there are those people who I am worried about: those that say the ANC has not been doing enough after 21 years of democracy. People need to understand that 21 years is a very short time compared to over 40 years the whites spent colonising and enriching themselves.

The National Party as government was specifically focused on improving the white people who are a minority; wealth was only distributed among the whites. Now when the ANC took over in 1994, it said South Africa is for all who live in it and was immediately supposed to cater for the whole 54 million people of South Africa. If you look at this, then you can see 21 years is not long enough to get everyone where they want to be. Other political parties are confusing black people who are blind to this fact. This is also why there are so many running independents that have left the ANC.

This infighting within the ANC is because of a third force. I know people are dismissing that claim but that is also exactly what they said when we told them in the 90s that there was a third party in the KZN political killings. [It was] thanks to the TRC that our claim was validated. We are now saying this again and I hope one day it can be proven that these killings and infighting is caused by a third force.