Home As Told to DA councillor in Durban: “The ANC are in for a bit of...
WhatsApp
Facebook
Twitter
Email
Print 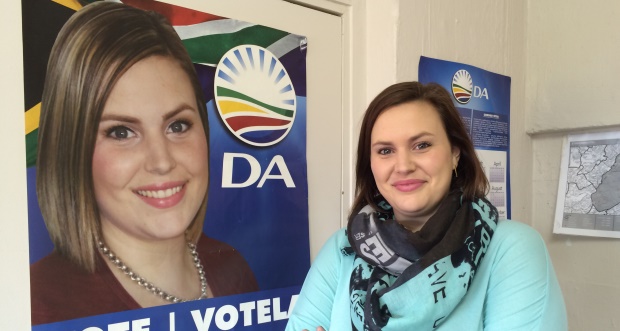 With a week to the local government elections, political parties are gearing up to make sure they win. The DA councillor in Durbanâ€™s ward 26 is 26-year-old Nicole Graham, whoâ€™s running in a ward thatâ€™s different to the one in which she is currently a councillor. The Daily Vox spoke to her to find out how sheâ€™s preparing for the upcoming elections.

I first got interested in politics when I was 16, and in varsity is when I started engaging in student politics. I am also a law student at UNISA and this takes up much of my time, I recently wrote exams and it has proven to be very hectic around election times.

I usually start my day at the office for two or three hours so that I can catch up with my emails, see residents and address all other kinds of queries. Then council meetings start at 10 and I serve on two committees, which is economic development and the ethics committee. These committees also meet quite frequently so I am often at City Hall. Then all DA councillors have a caucus on Fridays and discuss issues of the city. Then the rest of my time is taken up by meeting residents, finding problems, reporting things to the city, and there are other bodies that require my attendance at their meetings like different community structures. As a councillor, there are no two work days that are the same.

The ward that I am running in is currently an ANC ward. It used to be a DA ward but we lost it in 2011 so Iâ€™m hoping that we can win it back. The contest is hot because in 2011 the ANC there got less than 50% and they had to have a coalition with the Minority Front. This ward consists of Point Road, South and North Beach area and this is a key area in the rest of Durban. It is crucial for tourism, everyone loves it but it has a lot of challenges like policing and litter.

Some of our biggest challenges are social challenges. Prostitution is rife in the area and has been for years. There is also drug abuse and vagrancy. There are lots of people who are begging and living on the streets which results in the surge of petty crimes. Other challenges include basic service delivery. Things like removing weeds in the pavement, cutting of grass in parks and garbage collection. In the past 18 months the municipalityâ€™s delivery of these services has drastically decreased.

When you are an opposition in the council it is very hard to achieve some goals because everything is subject to the will of majority of the council. At the moment, we have just finished re-fencing the Queensmead stadium which had been looking quite shoddy. Two years ago we initiated a plan to build a sub-station; this has just been started. The plan for the Bulwer park project is now in its second phase. Another thing I am proud of is that I have been able to help young people get job opportunities.

There are a whole lot of other things I have been trying to accomplish but have been prevented by the council. Most of these things are much bigger than this ward – one of these is the cityâ€™s events strategy. Durban has made great progress in being an events capital but I think their approach is very problematic. In the council. I have repeatedly requested that they donâ€™t bankroll event organisers to try and get them to hold events here. There is a difference between sponsoring events and partnering with event organisers. The city is currently sponsoring events while they should be partnering with organisers. There are events that the city handles well such as Tourism Indaba, the Durban July, SAMAs and Metros because in these we see profits. But when it comes to other events like the recent Nicki Minaj and T.I concert, in which the city spent over R3 million, the approach is wrong. The city should not be seen as a bank for organisers; it is currently spending way more than it needs to.

Last year, I initiated regular meetings with the residents but I found that they were not very well attended. I allow people to contact me directly through emails and through the phone. I get over 100 emails per day and my phone rings non-stop despite the office being open every two to three hours a day. What I also found to work better is street meetings where I would meet residents from about three or four streets to discuss their immediate issues. The response to this method has been quite good.

I believe ward councillors should be passionate about their communities. Sadly, people are more in it for themselves than they are for trying to improve the community. You should also be hardworking because the number of issues you are expected to resolve is quite hectic. As a councillor, you also have to have some kind of skill to bring to the table. On the council, your main responsibility is to hold the city accountable for how itâ€™s run.

The public response to the campaigning has been very positive, especially compared to past elections in which I have worked on.

In my campaign, I donâ€™t want to promise too many things because like I said, it is very hard to get things done when you are an opposition councillor. I do not want to promise things that will end up getting shot down on council and I end up as a person who has false promises. I just promise basic service deliveries.

I am looking forward to these elections, I think itâ€™s going to be very interesting. The ANC are in for a bit of a wake-up call, especially since there is a lot of infighting.