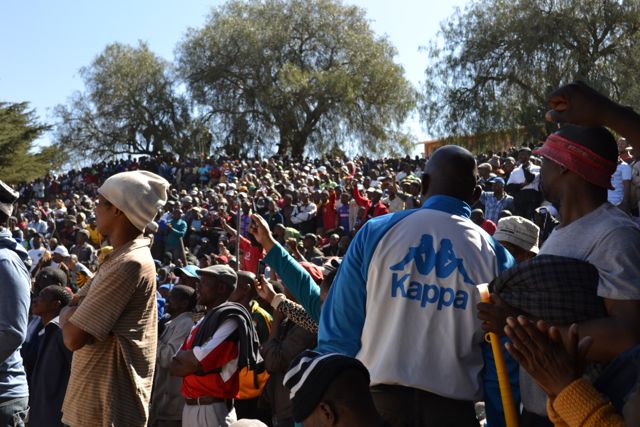 Every week, we invite a South African journalist to write a short blog on politics in the country. This week CCTV’s FAHMIDA MILLER wonders whether the South African electorate has matured.

I was recently asked if I thought the ANC is a dead party.

While elections this year certainly wonâ€™t be the death knell of the ruling party, it will be an indication of what the ANC stands to lose should it not get its house in order.

Concerns around corruption, cronyism and the fracturing of the tripartite alliance have badly damaged the party, which simply cannot be detached from the liberation of South Africa.

Prior to the 2009 elections, we saw the emergence of what was supposed to be a black alternative – as opposed to the DAâ€™s perceived white option – to the ANC. However, COPEâ€™s internal battles and financial woes soon proved too much for the partyâ€™s public appeal.

Then, last year, AgangSA was established. But even with businesswoman and academic Mamphela Ramphele at its helm, the party did not win the mass support it had hoped for. Rampheleâ€™s recent union with the DA and announcement that she would stand as the partyâ€™s presidential candidate lasted all of five days after she had apparently failed to consult her own party. Helen Zille, who just days earlier was locking lips with Ramphele, now describes her ex-BFFas someone who â€œcannot be trusted to see any project through to its conclusion.â€

The stage is set for what promises to be, at the very least, an entertaining build-up to South Africaâ€™s fifth democratic national elections.

While it may be a laugh-a-headline, the nature of interactions between the ANC and the newly-formed party of its former youth league leader, Julius Malemaâ€™s Economic Freedom Fighters, is concerning. The overriding message from supporters of the EFF is: â€œWe are tired of the ANCâ€.

On several occasions, members of both parties have been involved in violent confrontations. And through all this, we have heard very little of leadership of either party reigning in their members. The lack of tolerance in the lead-up to the election is not encouraging.

As I prepare to cover this election from home for an international audience, I look forward to witnessing the development of a long overdue political maturity. I look forward to showing the world that that democracy can work in Africa; it can bring change and empower the people it is designed to serve. However, given the confusion, contradictions and outright comedy of errors that has characterised the build-up to the polls, itâ€™s very likely we will be subjected to more mud slinging than ever before, broken promises and a reluctance to accept past faults.

Perhaps itâ€™s a more mature voter we will be meeting over the next three months, considering the existing climate of frustration and fatigue gripping South Africa.

While political opposition may be frothing at the mouth, collapsing or growing in strength, the ANC surely needs to take note of its increasing number of political foes and of voters desperately seeking an alternative.

Fahmida Miller is a South African journalist and news anchor based in Nairobi, Kenya. Her work in television and radio includes covering the Libyan uprising in 2011 and in the same year conflict and famine in Somalia. She was most recently part of international broadcaster, China Central Television’s team covering the death of Nelson Mandela. Follow Fahmida Miller on Twitter.