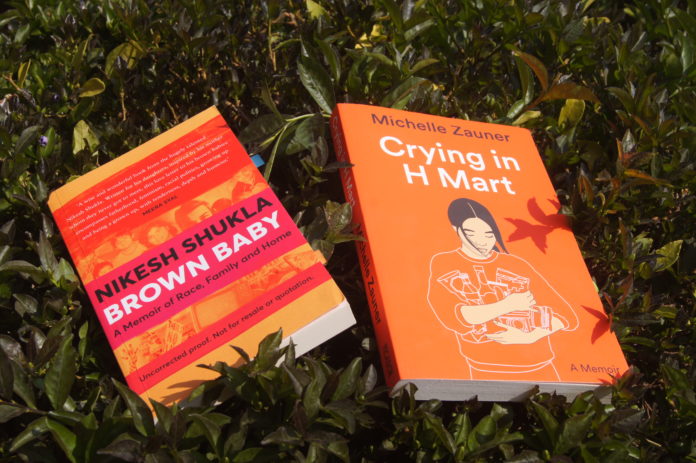 Food and grief have a special relationship. In Michelle Zauner’s Crying in H Mart and Nikesh Shukla’s Brown Baby, the reader gets a beautiful insight into this relationship. Both memoirs look at food, love, loss of a mother and grief.

Zauner and Shukla’s books come from vastly different contexts but have some remarkable similarities. Zauner is a Korean-American author and musician – more commonly known as Japanese Breakfast. Shukla is a writer and filmmaker of Indian-origin from the United Kingdom.

Despite these differences, reading their books feel very similar. Both deal with the devastating loss of their mothers from cancer and how they navigate their grief.

Crying in H Mart is Zauner’s memoir which emerged from a 2018 piece she wrote in the New Yorker. The book builds on the piece which was about visiting the Korean supermarket chain, H Mart after the death of her mother. She wrote about how standing in the familiar shop made the loss of her mother all that more vivid. She remembers the supermarket trips she made with her mother. Zauner also sees her mother reflected in the women at the store. The book is a powerful, sad, funny and deeply reflective story. Zauner goes into detail about what it was like growing up as a mixed race teenager and struggling under her mother’s expectations.

It was interesting reading the book and seeing Zauner’s struggles with her identity but also her chosen passion of music. She is a struggling musician for a lot of the book. But as the reader, you are aware of the fact that she is now the established artist, Japanese Breakfast.

Beyond her work and career, this book is mostly about a mother and daughter. Zauner writes about how she doesn’t understand her mother and her mother seemingly doesn’t understand her. What makes the pain of the loss even more evident is that just when their relationship is at a good place, her mother passed on. The book is absolutely beautiful and heartbreaking. Zauner is a brilliant storyteller. It’s raw, unapologetic and will make the reader cry.

Brown Baby is Shukla’s memoir which was written for his daughter, Ganga. Most of his writing focuses on race, racism, identity, and immigration. This book is no different. But it is also very different in many ways as it is deeply personal. Just ten days before his debut novel was released around ten years ago, his mother passed away. Years later after his daughter’s birth, Shukla struggles to find ways to be a good parent and guide his daughter as the loss of his mother hangs over him.

In the book, he puzzles through how he will teach his daughter about being mixed-race in a racist story and how to be a father to a daughter in an extremely sexist society. Shukla recalls memories of his mother and his childhood as he tries to think of raising his daughter. The story is funny and sweet and also deeply painful at times. His explorations of grief are so real and vivid that it’s difficult  not to get swept away with it.

The book is a brilliant and heartbreaking look at what it means to navigate the loss of a mother. More than that it is about what it means to exist as a brown person in a xenophobic and racist world but to never lose joy.

On grief and food

What ties both books together is how they go through their grief using food. In Crying in H Mart, Zauner moves back to look after her mother when she falls ill. Once she is home, she tries to cook the foods she ate as a child for her mother. She realises how powerful food is for preserving that connection with her mother. Later on, when her mother passes on and with her mother’s death all that knowledge, Zauner turns to popular YouTuber Maangchi, for help. She fills her kitchen with kimchi and jjigae and all types of Korean food.

For Shukla, food is a comfort and a coping mechanism after his mother’s death. He becomes an excessive snacker – often hiding his snacking from his family. There is one especially powerful scene where he returns to his childhood home and finds a container of food his mother had prepared in the freezer. Reading about the emotions he experiences as he heats up the food and eats it is something else. Shukla also attempts to recreate the dishes his mother made for him as a child.

Grief, Zauner and Shukla tell the reader is not just one thing. It comes and goes away. Grief arrives at the most unexpected moments. It is all consuming and never truly leaves a person. Zauner says grief feels like a hard surface where she keeps hitting her head against – knowing that she will never see her mother again. For Shukla, the loss of his mother is even more acute because he is constantly reminded that he doesn’t have her to turn to when he is facing struggles.

Both books end on a positive note. Shukla realises his mother will always be with him and that he will always be there for his daughters. Zauner rediscovers her mother and finds some kind of healing. But even as the pages come to an end, their stories have obviously not ended. For the moment though, there is some comfort.

Both books can be difficult reads. They don’t hold anything back. But that’s what makes them so relatable and beautiful to read. Even if you haven’t experienced the undeniable painful loss of a parent, there’s something about grief, food and love which is universal.

Both books are published with Pan Macmillan and are available at all good bookstores and online.