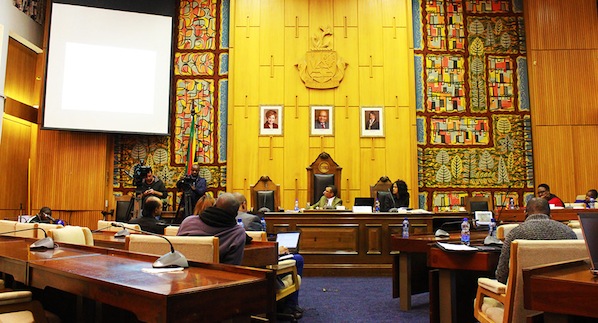 Friday marked the final day of the Lwandle public hearings in Cape Town. Community activist, Colin Arendse, and members of the ANCâ€™s Provincial Working CommitteeÂ presented submissions to the Lwandle ministerial inquiry. Between the finger-pointing and political point-scoring, a discussion around land audits and the exploitation of the countryâ€™s poorest people was had. But was it enough?Â The doors to the Goodhope Sub-Council chambers opened for the final time to welcome the Lwandle Commission of Inquiry. The evictions at the informal settlement of Nomzamo, near Lwandle, in early June had roused public interest, with media, activists, and online observers unable to tear their gaze away from the violence.

Inside the chambers, it was quiet. I had rushed to Sub-Council building half-expecting it to be full, but there was no need. More than half the chairs were empty. Between the members of the inquiry, those who had come to give testimony, and a handful of journalists and cameramen, there were just over a dozen people in all.

Advocate Denzil Potgieter, chairperson of the commission, began proceedings atÂ 10amÂ sharp withÂ Colin Arendse presenting his submission to the court. Although Arendse had not been a witness to the evictions in June, his experience as an activist in the Western Cape moved him to suggest recommendations to the commission. Arendse spoke quietly but gave an impassioned address.

People who live in TRA housing are often forced onto the outskirts of the metropole, â€œchucked out as if they are lepersâ€, he said.

â€œThere is clearly a problem in this province,â€ Arendse said, â€œwhat happened in Lwandle is not a once-off.â€

The stillness was broken only by the sound of a journalistâ€™s fingers tapping hurriedly at a keyboard, and an odd cough from across the room. Arendse put forward a list of recommendations to the inquiry. He suggested that the Nomzamo victims receive reparations with the help of the state, and called for a subsequent commission to investigate the problem of housing and the violation of the rights of the poor during evictions on a provincial scale.

Arendse also suggested that if the inquiry finds that constitutional rights were violated in Nomzamo, those at fault in public office should pay for reparations instead of taxpayers.

â€œYou canâ€™t have this happening at this stage of our democracy,â€ Arendse said. â€œYou need to teach people a lesson by hitting their pocket. Why must taxpayers be saddled with the mistakes of people who work for the state?â€

As Arendse spoke, the ANC councillors behind him sat very still. Journalists focused on the notepads in front of them, hastily jotting down notes with knowing smiles on their faces.

The ANC members took it bravely, unflinching in their own testimony, because it wasnâ€™t really their fault. Or so they say.

Rhoda Bazier took the lead on the ANCâ€™s presentation for the day, saying the DA had stuffed up everything concerning land and housing in the province. According to Bazier, before the DA came into power in the province, the ANC had drawn up a housing list, and it was only when the ANC came back into power that everything would be rightfully restored.

â€œThe housing list was interfered with quite a bit by the DA-led government. The DA has changed that list, and it is not in the public domain,â€ Bazier said.

Bazier recommended that a land audit be done, and those in power (namely the DA) strengthen their commitment and resolve to build houses for those who need it. Although the DA has completed a land audit, Bazier said, ANC members are unable to access the information because of their affiliation with the Sesâ€™Khona People’s Rights Group, which is known to the DA as the enemy. As Bazier spoke, women could be heard singing boisterously from the road below, the sounds of protest foreign in a CBD that marginalises the poor.

In the courtroom, the ANC group said the DA fears â€œthe response of its own constituencyâ€ when it comes to where houses are made available, that it is afraid to build low income housing in middle class areas.

The Nomzamo settlement is in Strand, just over 30 minutes outside the city centre. Itâ€™s a long and expensive trip from the city by taxi.

After my previous visit to the public hearings, I wrote about the politicking that had taken place at the Lwandle hearings. Friday was much the same, but it helps that activists like Arendse are there to remind those at fault that they are under scrutiny, too.

The public hearing wrapped up for the last time, with an announcement that the inquiry will present its report to Human Settlements Minister Lindiwe Sisulu on Tuesday. As I exited the building, the protestors Iâ€™d heard before were animatedly toyi-toying at the base of the Provincial Legislature. I wonder if the voices from Nomzamo will be heard comeÂ Tuesday.