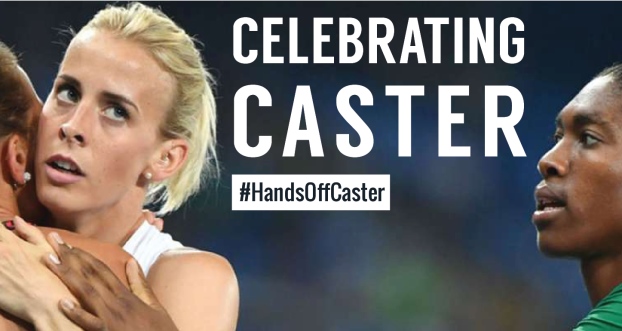 But the haters gonna hate, right?

Joanna Jozwik, the Polish athlete, who placed 5th in the race has claimed that she feels like a “silver medalist.” Not only did Jozwik dismiss an entire continent, she also dismissed an entire race by claiming to have finished as the “first European” and the “second white” in the race. It’s too bad Jozwik doesn’t have the medal to validate her feelings of achieving Olympic Silver.

@Sisonkemsimang She was running against a competitor who has a pair of balls, in a woman’s race. Nothing to do with race, or privilege.

There is contestation on whether or not Caster Semenya is hyperandrogenic: hyperandrogenism is the term used to describe disproportionate productions of testosterone in women. Semenya has been reported to be hyperandrogenic in a number of news articles.

And as South Africa basked in the shadow of Caster’s gold, elsewhere, Caster was deemed to have an unfair advantage over the rest of the field.

Ah it’s the 800m not 400. Either way that half man Caster Semenya has an unfair advantage. That medal is tainted.https://t.co/BE9dsL4p03

In 2011, the IAAF released a ruling that deemed female athletes with hyperandrogenism eligible to compete in the Olympic Games.

Rules are rules and whether Semenya is hyperandrogenic or not, her eligibility to compete in the Olympics is undisputed.

But it wasn’t just the tweeting naysayers who rained on Caster’s parade.

Lynsey Sharp, the British athlete who placed sixth in the 800m final is all over the news following her show of emotion over the difficulty of competing against athletes who are believed to be hyperandrogenic.

Does Lynsey Sharp, in her bullying of other athletes, realise that she was nowhere near a medal?

We’re not actually all that surprised that white tears brought the world to its knees.

White privilege is coming in *6th place* and blaming the Black winner’s ‘masculinity’ for your failure to medal. pic.twitter.com/Ruw4EtFRLX

One has to admire Queen Caster, whose only response to the vitriol and the tears was: “It’s all about loving one another. It’s not about discriminating people. It’s not about looking at people [and] how they look, how they speak, how they run. You know, it’s not about being muscular. It’s about sports. When you walk out of your apartment, you think about performing. You don’t think about how your opponents look. You just want to do better. I think the advice to everybody is to go out and have fun.”